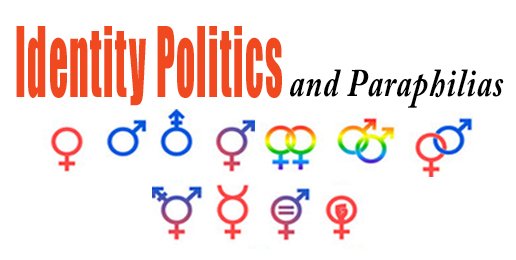 The cultural war is going to continue to become weirder. Some might reasonably think that nothing stranger can follow the Leftists’ call for everyone to accept transgenderism as normal.

But then there are all those other letters that follow the “T” in LGBT. You may have seen different variations on the list: LGBTQIA is a popular one (Q=queer or questioning/I=intersex/A=Ally). That’s only 3 more letters you say, that’s no big deal. Except that the list continues on — you can read just three of many articles from Leftists here, here and here.

What is learned from those lists is that we’re in for a long haul. Whether it is a distorted view of “gender,” or the many varieties of sexual desires, each group could be in line to get their own letter and join in for “equal justice.” This series — aimed at expounding upon the cultural phenomenon of identity politics, also will be featuring the many “paraphilias,” which is defined by the liberals at Wikipedia this way:

Paraphilia (also known as sexual perversion and sexual deviation) is the experience of intense sexual arousal to atypical objects, fetishes, situations, fantasies, behaviors, or individuals. […] The number and taxonomy of paraphilias is under debate; one source lists as many as 549 types of paraphilias.

If you think things are out of hand now with high school “transgender” boys being able to use the girls’ locker rooms, just wait. That number of “549 types” promises even worse possibilities ahead.

The Culture War Is Not Over: Leftists Fight Over Identity Politics

Paraphilia of the Day: Gerontophilia

‘Identity Politics Aim for the End of America Itself’

Wikipedia and Our Paraphilias of the Day: Acrotomophilia and Apotemnophilia

Identity Politics: Is America & the World Running Out of Patience w/LGBTQIA Activism?