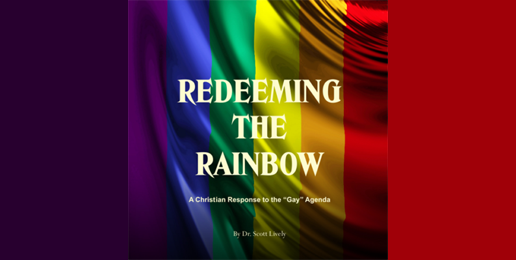 Readers may have noticed that each of these posts has begun with a citation from one or more articles on the topic of identity politics and then closes by highlighting a paraphilia. This time we will only excerpt two of my favorite writers – the Illinois Family Institute’s Laurie Higgins and Pastor Scott Lively.

These were first posted back in 2014, I began the article with this introduction:

The term “sexual orientation” is a fictitious socio-political construct invented by the left to promulgate the non-scientific idea that homosexual proclivities and temptations are somehow neutral, immutable characteristics that define a same-sex attracted person’s identity. Two well-respected cultural analysts shared their thoughts on the subject.

“Sexual orientation” also connotes the idea that homosexuality is biological determined, immutable in all cases, and inherently moral, all of which are controversial assumptions.

Homosexuality is not merely one of several healthy and moral manifestations of sexuality. Rather, it is a disordering or perversion of the sexual impulse.

Our side needs to understand this and stop using the term “sexual orientation.”

Sexual orientation” is a highly ambiguous term loaded with hidden false assumptions. So-called ‘sexual orientation’ is just a theory that lets people pretend that sexuality is a subjective state-of-mind and not an objective truth based on our self-evident physiological reality.

Sexual orientation” is a fictional socio-politcal construct invented by homosexual activists, and is their religious doctrine.

Another purpose of “sexual orientation” theory is to create a context in which homosexuality and heterosexuality hold equal status.

The notion of equivalency between homosexuality and heterosexuality is very important to pro-“gay” arguments. For one thing, it neutralizes health and safety arguments against the legitimization of homosexuality. For example, it is an uncontested fact that homosexual conduct spreads disease and dysfunction.

When reminded of this, “gay” sympathizers say, “heterosexuals do the same things.” This isn’t a logical defense of homosexuality per se, since two wrongs don’t make a right, but even so, the medical data shows that heterosexual behavior, even when promiscuous, really doesn’t result in nearly as many negative health consequences. However, it is an argument for treating homosexuality equally with heterosexuality, if the two were truly equivalent. But they are not.

An anti-discrimination policy based upon “sexual orientation” is always the first step in the homosexual takeover of an organization, because it locks in pro-“gay” assumptions. From the adoption of this policy, the organization must accept as fact that homosexuality is immutable, equivalent to heterosexuality, and deserving of special protections without regard to public health considerations. Criticism of these positions, or even failure to affirm them, can be considered violations of the policy. Where such a policy is enacted, adoption of the rest of the homosexual political agenda is virtually inevitable. The conclusions are assured by these (false) premises. The takeover process varies slightly depending on the type of organization, but is predictable and easily recognized.

In summary, “sexual orientation” is a term that is used by homosexual activists to deceive both policy makers and the public about the nature of homosexual behavior. It frames the debate about homosexuality in such a way that the average person is tricked into accepting pro-“gay” presuppositions without challenge. This is even true of those people who continue to oppose the homosexuals’ political goals.

Once the presuppositions have been accepted, especially when they become “law” in anti-discrimination policies, resistance to the rest of the homosexual agenda becomes much, much more difficult.

The only effective strategy is to reject and refute the false assumptions of the fictitious “sexual orientation” socio-political theory, and re-frame the issues on a truthful foundation. “Sexual orientation” must be exposed for what it is: a nonsensical theory about sexuality invented by “gay” political strategists to serve their own selfish interests at the expense of the welfare of society as a whole.

Up next: Man’s Search for Meaning.

COMING SOON: Identity Politics and Paraphilias: LGBT is Not a Color