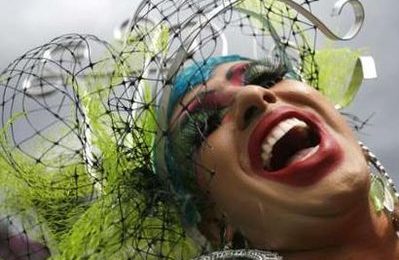 As with many topics, identity politics can be approached on any number of levels, such as intellectual, spiritual, and emotional.

Yet, too few Americans actually talk about what we’re really talking about when the subject of the “LGBT community”/identity politics comes up. LGBT represents only four letters — thus, 4 identities.

What are the terms of this expanding identity politics phenomenon, and what is the long range impact going to be on our society and culture? What is the nature of human identity, and has God had something to say about it? What’s the proper response to those with deep feelings about who they are? Like the old Almond Joy/Mounds candy bar commercial — sometimes they feel like a nut, sometimes they don’t.

Many people are writing about the increasing difficulty of taking all of this seriously. New York City now recognizes over 30 “gender” identities. Here is Jazz Shaw writing at HotAir.com:

If the government is willing to not only recognize but mandate the acceptance of a person’s desired gender rather than their actual sex, why should there be any barriers at all. What about people suffering from Cotard’s Syndrome? They fervently believe that they are undead… literally zombies walking the Earth. Can Uncle Sam declare them dead just to honor that belief and force the medical community to treat them as corpses? While that may sound like an extreme comparison, it’s actually the same thing. There is precisely as much scientific evidence that a man identifying as a “transgender woman” is actually female as there is that a Cotard’s sufferer is actually a zombie.

Over at First Things, Katherine Kersten writes about “gender conforming” and “gender-nonconforming.” She writes:

The Judeo-Christian vision, which shaped Western civilization for 1,600 years, holds that God created man—body and soul—with purpose and meaning in an ordered universe. But the post-Christian worldview fast replacing it has no place for God, and perceives no purpose in nature. Christian man has become “psychological man” and the soul has become the self, in the words of Philip Rieff. The free-floating self—unconstrained by reality—is now believed to forge its own “identity” through a creative assertion of will.

Post-Christian man views his body as a tabula rasa—a canvas on which to express his identity and exert his will. In fact, the more contrary to nature one’s new self is, the more “authentic” it can claim to be. The recent mania for tattoos and piercings is a case in point. The desire to be free of the human condition and its limitations has ancient roots.

“Today,” Kersten writes, “transgender advocates are creating a Potemkin Village—built on hormones, surgery, and chest-binders—to solidify the illusion on which their magical reality is based.”

In the near term, transgender ideology will further polarize society and diminish the shared civic space where liberals and conservatives can fruitfully coexist… Longer term, it will mount an escalating attack on the family and religious institutions, the perennial targets of totalitarian forces.

So identity politics is not just about the confused emotional life of “progressives.” Instead, it is a threat to family and religious institutions, the very building blocks of Western Civilization. Again, here is Katherine Kersten:

As we enter the world of fantasy—when reality ceases to matter—it is impossible to predict where our society will crash against nature, as it inevitably will.

It’s time for our paraphilia of the day, and it’s one I’ll only introduce today and revisit with more next time: transgenderism. Wikipedia’s “transgender” page has been rewritten since I cited it a few years ago — and the first section runs four paragraphs. Here is just the first one:

Got it? Let’s close with our next question: Will the expression of disapproval of transgenderism be deemed bullying or hate speech? Of course we already know the answer to that is yes.

Up next: Transgenderism a Choice or Disorder?