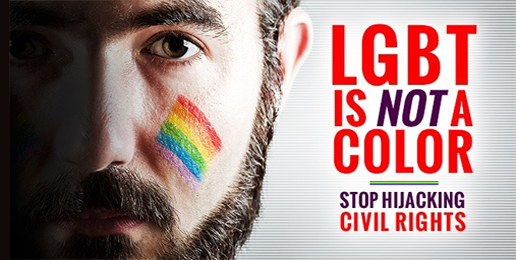 Identity Politics and Paraphilias: LGBT Is Not a Color & Fetishism
Written By John Biver   |   03.08.17
PRINT

Last fall Breakpoint’s John Stonestreet posted an op ed titled and subtitled, “LGBT Is not a Color: Stop Hijacking Civil Rights,” and here was the introduction: “Are sexual orientation and gender identity the same as race? That message is being snuck in all over the place.”

He writes about the “conflation between skin color and sexual orientation”:

Nobody wants to be on the wrong side of today’s equivalent of the Civil Rights struggle, or to be viewed like racists by future generations.

But the fact remains, the two issues are just not the same. And black leaders—many of whom fought for the right to be treated as equal human beings decades ago—keep telling us this.

“The language of ‘civil rights’ shouldn’t be hijacked to give privileges to the politically vocal while taking away freedoms” for everyone else, said Bishop Patrick Wooden at a gathering of black faith leaders in Raleigh. And Pastor Leon Threatt of Christian Faith Assembly in Charlotte, agreed: “Restrooms and showers separated by biological sex is common sense.”

The Civil Rights comparison will continue to crop up, but we’ve got to vocally and repeatedly point out why it’s false. Sexual urges don’t determine who we are, and recognizing the fact that God created us male and female isn’t racism. It’s reality.

“Sexual urges don’t determine who we are” isn’t difficult to understand; no one should be confused. Yet the advance of the “LGBT agenda” owes its success in promoting identity politics to just that kind of lack of understanding.

The premise of this series is that one important way to breakthrough to the confused is to make it clear how many possible “identities” there are, and thus just how many letters follow the first four — “LGBT.” It’s time for our next paraphilia — today let us focus on “fetishism.”

As previously noted, this investigation into the many paraphilias is a remedial education effort to put the discussion of so-called “gay rights” in its proper perspective. Experiencing and acting upon same-sex attraction is not comparable to race, but rather is comparable to the myriad and many ways people experience sexual arousal outside of natural sex between men and women.

Here is the Wikipedia page on fetishism as this article goes to press:

One more note of interest that actually increases our list of possible letters to follow “LGBT” — here is Wikipedia’s paragraph on types of fetishes:

In a review of 48 cases of clinical fetishism, fetishes included clothing (58.3%), rubber and rubber items (22.9%), footwear (14.6%), body parts (14.6%), leather (10.4%), and soft materials or fabrics (6.3%). A 2007 study counted members of Internet discussion groups with the word “fetish” in their name. Of the groups about body parts or features, 47% belonged to groups about feet (foot fetishism), 9% about body fluids, 9% about body size, 7% about hair (hair fetish), and 5% about muscles (muscle worship). Less popular groups focused on navels (navel fetishism), legs, body hair, mouth, and nails, among other things. Of the groups about objects, 33% belonged to groups about clothes worn on the legs or buttocks (such as stockings or skirts), 32% about footwear (shoe fetishism), 12% about underwear (underwear fetishism), and 9% about whole-body wear such as jackets. Less popular object groups focused on headwear, stethoscopes, wristwear, and diapers (diaper fetishism).

Are you overwhelmed with what the future holds as all these categories demand their rights and equality and recognition?

Let’s close with our next question in our long list of questions regarding all the various paraphilias: How will schools respond to requests to start pro-fetishism clubs to support students who experience such feelings and who seek to come out of the closet? Will the Day of Silence expand to include fetishism?

Up next: Leftists Can’t Navigate it Either.