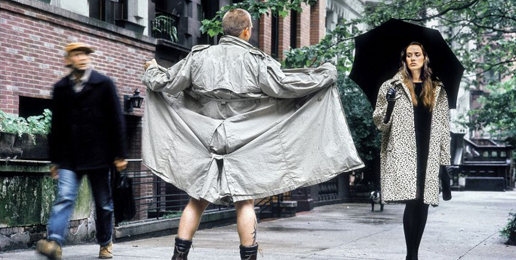 Paraphilias of the day: Peodeiktophilia and Homeovestism
Written By John Biver   |   12.08.17
PRINT

Just a quick review: what is a “paraphilia”? As previously noted, this intro to the Wikipedia page on the topic is sufficient:

Paraphilia (also known as sexual perversion and sexual deviation) is the experience of intense sexual arousal to atypical objects, fetishes, situations, fantasies, behaviors, or individuals. No consensus has been found for any precise border between unusual sexual interests and paraphilic ones. There is debate over which, if any, of the paraphilias should be listed in diagnostic manuals, such as the Diagnostic and Statistical Manual of Mental Disorders or the International Classification of Diseases.

The number and taxonomy of paraphilias is under debate; one source lists as many as 549 types of paraphilias. The DSM-5 has specific listings for eight paraphilic disorders. Several sub-classifications of the paraphilias have been proposed, and some argue that a fully dimensional, spectrum or complaint-oriented approach would better reflect the evidence.

As Leftists in society pressure normal people to open their hearts and minds to all kinds of sexual perversion via the LGBT agenda, our goal here is to make sure Americans know what’s coming soon. Children will have to be taught an entirely new alphabet.

Trigger warning: Peodeiktophilia (the exposing of one’s male genitals), does not have its own Wikipedia page. On this page List of Paraphilias, the word Peodeiktophilia is linked to the exhibitionism page. I trust that will soon be remedied by those right-side-of-history-progressives who edit Wikipedia.

After all, the first recorded examples of this behavior were in fifth century BC Greece. Mankind sure is slow to accept people for who they are!

Since our first paraphilia was really just an offshoot of Exhibitionism (which we already covered), rather than leaving our readers feeling short-changed in this article, let’s also look at a couple more:

Homeovestism is a concept identified by George Zavitzianos and further developed by Louise Kaplan, to refer to the arousal of a person by wearing clothing appropriate to their gender, in comparison with the more widely recognized practices of transvestic fetishism, in which one is aroused by wearing clothing of a different gender.

Don’t ask me to explain that one either. The only explanation I can provide is found in the book of Genesis chapter 3.

Okay, one more — and I apologize for missing Halloween by so many weeks: Autovampirism/Vampirism.

Many self-professed vampires actively resent the term “lifestylers”, as it tends to carry the connotation that vampirism is not real.

Active vampirism within the vampire subculture includes both sanguinarian vampirism, which involves blood consumption, and psychic vampirism, whose practitioners believe they are drawing spiritual nourishment from auric or pranic energy.

The vampire and therian subcultures are related to the otherkin community, and are considered part of it by most otherkin, but are culturally and historically distinct movements of their own despite some overlap in membership…

Sex researchers have documented cases of people with sexual (paraphilic) vampirism and autovampirism.

Many of you have figured this out many articles ago. Radical Leftists have stepped into an arena of silliness regarding the LGBT agenda that defies reason. If social conservatives lose this fight for the public mind, it will be Halloween every day.