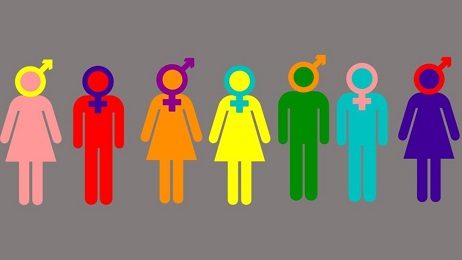 Mike Miller at the Independent Journal Review posted a Tweet from Fox News’ Brit Hume about the University of Kansas Gender “pronoun buttons” — Hume Tweeted, “Is there no end to this foolishness?”

What foolishness? Miller reports that “Signs in the university’s various libraries explain the purpose of the buttons”:

Because gender is, itself, fluid and up to the individual. Each person has the right to identify their own pronouns, and we encourage you to ask before assuming someone’s gender. Pronouns matter!

Misgendering someone can have lasting consequences, and using the incorrect pronoun can be hurtful, disrespectful, and invalidate someone’s identity.

Misgendering. That’s a first for me — I hadn’t heard that word before. My vocabulary has expanded a lot in recent years.

More and more of the people who considered themselves “enlightened” and “open minded” about the LGBT “agenda” (Brit Hume might even be one of them) are now being pushed to their tolerance limits by the growing list of “identities” that we are all supposed to not discriminate against.

I wonder if Hume has bumped into the list of paraphilias. There is a short list and a longer list. I have not been able to find the entire 549 yet but I will keep looking.

When it comes to “identity politics,” as I noted last time, the list of possibilities are endless. The most common ones are race, color, religion, sex, national origin, age, and the bogus “sexual orientation” (more on that in a later post). In recent years, the letters following LGBT have begun to come out of the closet, and as noted above, the group wanting to expand the list of “genders,” such as at the University of Kansas — represent even more letters!

Two years ago when I discussed this series of articles with the Illinois Family Institute’s Laurie Higgins, she had this to say:

To your question about whether we should iterate and reiterate what distinguishes natural sex between men and women from perversity in all its protean forms, I say, absolutely. As often as the Left says homoeroticism is akin to skin color, we have to say, no, it’s akin to paraphilias, incest, and polyamory.

In this effort to lay out the range of possibilities in identity politics, let us turn to our first paraphilia: incest.

Wikipedia deserves much of the criticism it receives from political conservatives, but I like to refer to it when useful. Here is an excerpt from their page on incest:

Incest is sexual activity between family members or close relatives. This typically includes sexual activity between people in a consanguineous relationship (blood relations), and sometimes those related by affinity, such as individuals of the same household, step relatives, those related by adoption or marriage, or members of the same clan or lineage.

The incest taboo is and has been one of the most widespread of all cultural taboos, both in present and in many past societies. Most modern societies have laws regarding incest or social restrictions on closely consanguineous marriages. In societies where it is illegal, consensual adult incest is seen by some as a victimless crime.

This series will ask a lot of questions — here is our first: How will society respond when those who practice incest start self-identifying as such and begin clamoring for their “rights”?

Up next: Frightening the horses.

The Crucifixion of Brit Hume