Posted on March 27, 2021 by David E Smith
The Equal Rights Amendment (ERA) is back in Congress -- back from the dead that is. This proposal to amend the U.S. Constitution has nothing to do with helping women and everything to do with 1.) the unencumbered “right” to kill babies while in utero—including baby girls; and 2.) the transgender agenda: more specifically, those who pretend they are members of the opposite sex and want the entire country to play along.
Posted in Federal | Tagged Abortion, Equal Rights Amendment, Transgender Agenda | Comments Off on ERA Is Back From The Dead, Again!

Democrats Are Trying To Sneak A Feminist Amendment Into The Constitution, 36 Years Later

Lou Lang Swings and Misses as a Constitutional Scholar

Posted on May 22, 2018 by David E Smith
Deputy Majority Leader and Illinois State Representative Lou Lang (D-Skokie) was so impressed with the speech he prepared for the organized Chicago hearing on the ERA two weeks ago that he decided to record himself giving it. The hearing morphed into more of a rally than a public hearing as Lang bellowed into the microphone patently absurd things like "not passing the ERA means the Constitution does not protect women". This flies in the face of the 14th amendment and was the justification in 1973 for the one thing Lang and other leftists in Springfield champion: Abortion on demand.
Posted in Illinois Politics, Sanctity of Life | Tagged Anne Schlafly Cori, Elise Bouc, Equal Rights Amendment, Kate Knorr, Lou Lang, Mary Kate Knorr, Stop ERA | Comments Off on Lou Lang Swings and Misses as a Constitutional Scholar 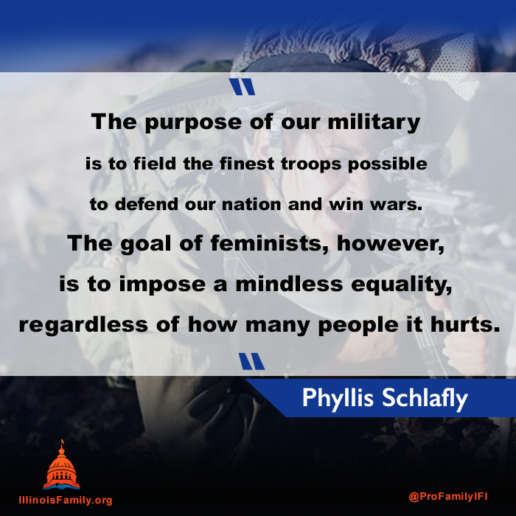 Strict Scrutiny and the ERA – A Bad Combination for Women

According to Illinois Review, McConnaughay made this remarkably foolish and dishonest statement in defense of her traitorous vote:

The intention of the Illinois Senate Women’s Caucus is

The ERA Harms Our Unborn Children

Posted on March 26, 2018 by David E Smith
The Equal Rights Amendment (ERA – Bill #SJRCA 4) is a poorly worded proposed amendment to the U.S. Constitution that would restrict all laws and practices that make any distinctions based on gender or sex.    While we believe in equal opportunity for men and women, we also recognize that there are situations where we must make distinctions based on our biological differences such as providing privacy through separate bathrooms and locker rooms.  If the ERA becomes fully ratified, men and women could not be treated differently, even if the different treatment is due to physical differences.
Posted in Federal | Tagged Equal Rights Amendment, ERA, Roe v. Wade, SJRCA 4 | Comments Off on The ERA Harms Our Unborn Children

WGLT, a public radio station and, therefore, an affiliate of National Public Radio (NPR), came to Illinois Family Institute’s (IFI) attention when a short article about IFI’s robo-calls warning Illinoisans about the campaign to resurrect the Equal Rights Amendment (ERA) decades after its expiration date …

The Equal Rights Amendment and Abortion

For those who weren’t politically active in the 70’s or never got around to learning the specifics about the Equal Rights Amendment (ERA), here is a thumbnail sketch of the purpose and danger of the ERA.

This proposed U.S. Constitutional Amendment is deceptively named. Men and women already have equal standing and equal protection before the law and possess God-given rights which are delineated in the Bill of Rights.

If the goal is to ensure equal opportunity, then the path is not the broad and ambiguously written ERA. Even supporters of the ERA cannot answer questions about its …

Like Medusa, the Equal Rights Amendment (ERA) has reared its chthonic head again, and this time it’s wearing a silly pink hat over all those snakes.

Since the ERA says precisely nothing about women, why do feminists continue to claim that it’s all about women’s rights? In fact, the harm the ERA will cause will redound primarily to women.

What the ERA will do is prohibit the public recognition of …

Hey Feminists! The U.S. Constitution Does Not NEED an Equal Rights Amendment

What exactly is the meaning of feminism? It sounds innocuous enough, like something akin to feminine. Declaring a man masculine or woman feminine is a good thing, not a pejorative. That is unless you are an ardent, radical feminist.

According to Webster feminism is:

The radical feminists of the 60’s and 70’s departed the pro-life moorings of the suffragette movement, which concentrated its efforts on the right to vote for women. The Nineteenth Amendment to the U.S. Constitution …

On May 22, 2014, the Illinois Senate voted 39 to 11 to pass SJRCA 75, the dangerous Equal Rights Amendment (ERA), in an effort to amend the U.S. Constitution to say: “Equality of rights under law shall not be denied or abridged by the United States or any State on account of sex.”

This legislation is now in the Illinois House for consideration and debate.  State Representative Lou Lang (D-Skokie) is the chief sponsor.  Although the session has adjourned, SJRCA 75 could move in the November veto session, after the November election. It’s critical that while state reps are

This afternoon, the Illinois Senate voted 39 to 11 with 6 voting present to pass SJRCA 75, a completely unnecessary proposal  to amend the U.S. Constitution to eradicate sex as a legitimate characteristic on which to base reasonable distinctions.

Click HERE to see how your state senator voted on this legislation, or look at the graphic below.  State Senators Pam Althoff (R-McHenry), Karen McConnaughay (R-South Elgin), and Sue Rezin (R-Morris) spoke against the bill.  Unfortunately, Republican leader Christine Radogno and Senator Kirk Dillard (R-Hinsdale) voted in favor of it.

The bill now moves to the …