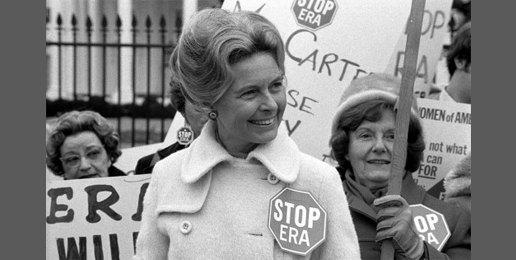 What exactly is the meaning of feminism? It sounds innocuous enough, like something akin to feminine. Declaring a man masculine or woman feminine is a good thing, not a pejorative. That is unless you are an ardent, radical feminist.

According to Webster feminism is:

The radical feminists of the 60’s and 70’s departed the pro-life moorings of the suffragette movement, which concentrated its efforts on the right to vote for women. The Nineteenth Amendment to the U.S. Constitution was ratified in August 1920:

Congress shall have power to enforce this article by appropriate legislation.

Thus it would seem the suffragette goal had been realized, their dreams come to fruition. But not according to Gloria Steinem and her modern feminist pals, none of whom advocated for anything resembling femininity. The bra-burners of the 60’s and 70’s, like the pro-abortion, pro-sexual perversion, pink-hat-wearing feminists of 2017, sought extreme change in society. The Left’s hue and cry of “DIVERSITY” only matters if they want to impose morés which differ from the long-accepted, Judeo-Christian worldview.

Far be it for any person to advocate diversity between the sexes: masculine men and feminine women have been harangued and replaced with manly women and effete men.

What is the point of feminists and their protests? What do they really want to accomplish?

In those days there was no king in Israel: every man did that which was right in his own eyes. Judges 21:25

The feminist protestors shout, “My body, my choice!”

But “it’s” not their body. And it should not be their choice.

And there’s the rub.

The modern day feminist movement is not about voting rights or land ownership or equal pay for (exactly) equal jobs. In fact, our marvelous Declaration of Independence states:

The noun “men” denotes the universal meaning of “all men and all women.” The Founders firmly believed that each and every one of us is endowed with the right to life, liberty, and the pursuit of happiness. Where did those early Americans learn that notion? From the pages of Holy Scripture. Christendom was the first faith system to truly “liberate” women.

Paul expounds in his letter to the Galatians:

And in the Apostle’s letter to the church at Ephesus:

Husbands, love your wives, even as Christ also loved the church, and gave himself for it… Ephesians 5:25

The Bible admonished something quite extraordinary — revolutionary even. Women have equal worth in God’s eyes. And men were told to love women as Christ loved the church, so much that he gave Himself as a sacrifice.

The Founders knew the Scriptures and were informed by biblical precepts. Those precepts undergird our founding documents. It is that biblical wisdom which makes our U.S. Constitution and Declaration of Independence so very unique.

Again, what is the point of the feminists and their protests? What do they really want to accomplish?

What are the “equal rights” that radical protestors dressed in heinous costumes of “lady parts” clamor for? The only “right” modern feminists fear losing — now that Republicans control both houses of the U.S. Congress and the White House — is the “right” to lawfully kill unborn babies.

Fairly or not, many women, especially on the left, feel like their rights could be under attack now that Washington is controlled by Republicans who are opposed to abortion and want to cut off funding for national women’s health care clinic Planned Parenthood.

The only “right” that might be terminated is the “right” to terminate a pregnancy, aka murdering the unborn. This new wave of anarchistic protests, full of x-rated costumes and vulgarity, is about abortion and Planned Parenthood and doing “what is right in their own eyes.”

A quick history/civics recap: Changing the Constitution is one of the most difficult things in all of governing, but Equal Rights Amendment supporters have come tantalizing close. In 1972, after a decade or so of debate, Congress passed it and sent it to the states for ratification. (Under one process to change or add a constitutional amendment, 38 states — or three-quarters — must ratify it, whether via their legislatures or a state convention.)

Congress gave the states an entire decade for 38 states to get that done. In the end, 35 did.

The amendment has been introduced in Congress off and on ever since, but it’s fallen flat. States haven’t bothered to touch it.

And Illinois, ever eager to lead the “progressive” parade, has introduced legislation to approve the U.S. Constitution Equal Rights Amendment in  SJRCA 4. This bill is sponsored by Illinois Senator Heather Steans (D-Chicago), and includes these provisions:

Section 1. Equality of rights under law shall not be denied or abridged by the United States or any State on account of sex.

Section 2. The Congress shall have the power to enforce by appropriate legislation the provisions of this article.

Section 3. This Amendment shall take effect two years after the date of ratification.”

Take ACTION: Click HERE to send a message to your state representative, urging him or her to vote AGAINST the Equal Rights Amendment. It’s essential for us to let our state representatives know that this amendment harms women, their families, and our society. Your calls and emails are vital tools for fighting this destructive proposal.

The feminists are attempting to codify abortion more stringently: they fear conservatives may attempt to overturn the wrongly decided Roe v. Wade and in a preemptive move are pushing this equal rights amendment.

It all comes down to life, not equality. A pro-life president and pro-life vice president are regarded as a threat to their most “sacred” tenet of abortion.

Don’t be deceived: the Left calls the blessing of children a curse. The radical feminists call good evil and evil good.

We must be informed. We must be radical, fervent prayer warriors. We must make our voices heard in defense of those who have no voice.

And we must always, without ceasing, choose life.

BTW — You can also call your state representative to ask him/her to vote NO to SJRCA 4 by calling the Capitol switchboard number at: (217) 782-2000.