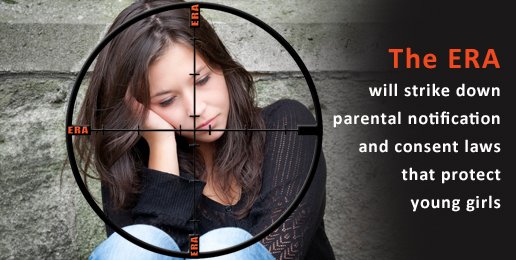 The Equal Rights Amendment (ERA – SJRCA 4) is a poorly worded proposed amendment to the U.S. Constitution that would restrict all laws and practices that make any distinctions based on gender or sex.    While we believe in equal opportunity for men and women, we also recognize that there are situations where we must make distinctions based on our biological differences such as providing privacy through separate bathrooms and locker rooms.  If the ERA becomes fully ratified, men and women could not be treated differently, even if the different treatment is due to physical differences.

The ERA will harm our unborn children

Since abortion is unique to women, any attempt to restrict a woman’s access to abortion is seen, under the rules of the ERA, as a form of sex discrimination – because women are being singled out for a characteristic that is unique to them, and they are being treated differently based on that physical characteristic (in this case- the ability to become pregnant).   Therefore any abortion restrictions would be overturned by the ERA. The ERA prohibits sex discrimination.  In addition, since medical procedures unique to men are funded by Medicaid (such as circumcision and prostatectomies), then abortion which is unique to women, must also receive Medicaid funding under ERA requirements.

Some of the states with state ERAs have already used their ERAs to mandate Medicaid funding for elective abortions and overturn abortion restrictions:

Using this same ‘sex discrimination’ logic, legal scholars have stated that the ERA would: