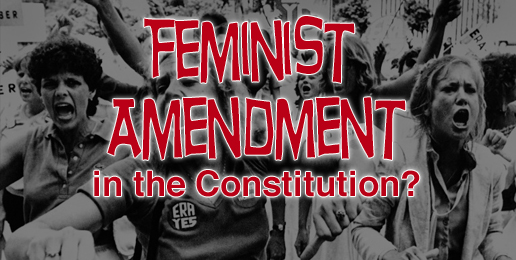 Democrats Are Trying To Sneak A Feminist Amendment Into The Constitution, 36 Years Later
09.11.18
PRINT

Allowing just three states to impose an amendment to the U.S. Constitution
that even proponents admitted died in 1982 is a moral fraud and a constitutional farce.

Proponents of the Equal Rights Amendment (ERA) want to create a constitutional Frankenstein by breathing life into its corpse some 36 years after its ratification was defeated, in large part thanks to Phyllis Schlafly and her Eagle Forum.

The ERA Congress sent to the states in 1972 stated: “Equality of rights under law shall not be denied or abridged by the United States or by any State on account of sex.”

This simplistic language hid a radical progressive social agenda. Amendments were rejected to exempt women from frontline ground combat duty, to require husbands to support their children, to keep certain sexual assaults as crimes, to neutralize ERA’s effect on abortion, to exempt private schools from the ERA, to protect tax-exempt status of churches that have male-only clergy, to permit different insurance rates for men and women, and to deny men access to women’s private facilities and vice versa.

In 1972 Congress imposed a seven-year limit for states to ratify the ERA, as it established for all but two constitutional amendments since 1918. But when the amendment stalled in 1977 with the support of 35 states — three states short of the three-fourths needed for ratification — ERA advocates lobbied Congress to extend ratification seven more years.

Major ERA proponents said the amendment would die without an “extension.”

Congress eventually extended the ratification deadline to June 30, 1982. (The Baltimore Sun, The Washington Post, The New York Times and The New Republic all supported the ERA, but opposed the time extension.)

The ERA extension resolution did not recognize withdrawal of previous ERA ratifications from Nebraska, Tennessee, Idaho, Kentucky, and South Dakota even though North Dakota’s rescission of the Presidential Disability Amendment was recognized in 1967 by the U.S. Secretary of State, who then tallied records.

Even with the unprecedented extension, the ERA fell three states short of the 38 needed for ratification. ERA advocates recognized their 1982 loss and re-introduced the amendment to Congress in 1983, but failed to reach the two-thirds majority needed for it to pass the U.S. House of Representatives.

ERA proponents now claim they need only add three more states to the original 35 which ratified by 1982 (ignoring the five states rescinding approval), to reach the 38 states required to add the ERA to “their” Constitution!

Their novel claim derives from the adoption of the 27th Amendment limiting congressional pay increases from taking place without an intervening election. This amendment passed Congress in 1789 without a ratification deadline. When 38 states finally approved it in 1992 — more than 200 years later — Congress declared it part of the Constitution, ignoring the U.S. Supreme Court’s 1921 finding that Congress could require contemporaneous approval of amendments.

Democratic Rep. Don Edwards, who supported the ERA extension and the Pay Amendment noted, “It should be clear that this [Pay Amendment] is an exception, not a precedent.”

Liberals are counting the actions by Nevada’s legislature (2017), and Illinois’ legislature (2018) allegedly ratifying the non-pending ERA as two of the three states they contend will bring them to the 38 state requirement.

Congressional joint resolutions from Rep. Jackie Speier (D-CA) and Sen. Ben Cardin (D-MD) proclaim that whenever 38 states “ratify” the version of the ERA submitted to the states on March 22, 1972, the ERA will be added to the Constitution. The resolutions do not mention the failed ERA time extension. Speier’s resolution has 165 cosponsors and Cardin’s has 36 cosponsors.

Cardin tweeted approval of the Illinois vote. “Most Americans are shocked to find out that the U.S. Constitution still lacks a provision ensuring gender equality. … We need just ONE more state to ratify and we need Congress to do its part by passing S. J. Res. 5, which would immediately remove the arbitrary and unnecessary deadline for states to ratify the #ERA.”

The words “Gender Equality,” mentioned in Cardin’s Tweet are not in the 1972 ERA, but hint at what liberals hope to achieve under their bogus ERA scheme. Opposition to “making women part of the Constitution” will invite the label of “bigot” or “hater.”

If one more state “votes” for the ERA, progressives are set to pressure Congress to declare the ERA approved. Possibly the Archivist of the United States, who initially certified the Pay Amendment before Congress did, will relieve Congress of its role.  This would duck the ruling in Idaho vs. Freeman (1981), in which a federal district court ruled states could rescind approvals and Congress could not extend the ratification time.

“Approval” of the ERA will legitimize other amendments still “floating around,” including one that increases the House of Representatives from 435 Congressmen to 6,400 (one for every 50,000 persons). Allowing just three states to impose a dead ERA on the Constitution, when even proponents admitted it died in 1982 is a moral fraud and a constitutional farce.

The passion of Leftists’ for their Utopia must be met with forthrightness from conservatives for constitutional government.  Find out today if your congressman and senators would affirm that only three states need to approve the ERA. If so, vote them out of office in November.

This article was originally published at The Federalist.