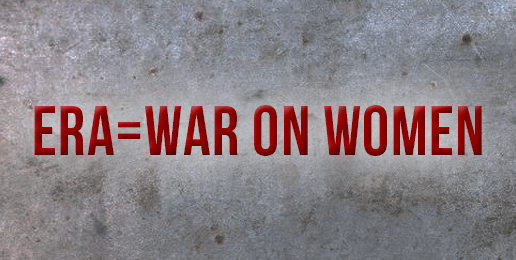 Strict Scrutiny and the ERA – A Bad Combination for Women
04.23.18
PRINT

On the surface, the Equal Rights Amendment seems quite innocent. The main text states, “Equality of rights under the law shall not be abridged or denied by the United States or any state on account of sex.”

Unfortunately for women, from a legal perspective, this simple language raises the category of “sex” to strict scrutiny which is the most restrictive standard of legal review. Under strict scrutiny, no one can be treated differently based on the characteristic that has become “suspect” (in this case – sex), and it is almost impossible to justify before the court any reason for treating them differently.

Currently race, national origin and religion are all justifiably adjudicated in this category. As a result, we can not treat anyone differently based on their race, national origin, or religion. Sex, however, is different from these other categories, in that there are clear biological differences (such as anatomy, hormones, ability to bear children, and privacy needs) that require a need to differentiate between men and women for the well-being and success of both men and women.

The push for women’s rights has always been about providing equal opportunities for women, and removing any obstacles that prevent them from having equal opportunities. It was never about making women fit into the mold of men, or making women become men. Since the civil rights movement in the 1960s, this push has resulted in careful adjustments of laws to ensure that women were supported in their endeavors, and these laws have often taken into consideration biological differences to provide for equal access to success. A prime example is the pregnancy accommodation law Illinois recently passed that provides pregnant working women in physically demanding jobs additional breaks and other temporary accommodations to protect them and their developing child during their pregnancy while still enabling them to retain their job.

Under the ERA with its requirement of strict scrutiny, any laws that provide different treatment to women, even when it logically makes sense to do so, would be overturned – thus removing valuable supports for women, and placing obstacles in their way to success. Under the ERA, one could simply argue that the pregnancy accommodation law shows preferential treatment for women in violation of the standard of strict scrutiny, and that beneficial law would be overturned.

When presented with these concerns, many feminists protest that the courts would never allow these valuable programs and practices to be overturned. They seem to view the courts as a place where laws can be made up or dismissed. Obviously they don’t understand the requirements of strict scrutiny. Because the ERA places sex under strict scrutiny, judges and lawmakers will be unable to change any of the extreme requirements of the ERA. Justice Ginsberg wrote a lengthy report in the 1970s, titled, Sex Bias in the U.S. Code, detailing the impact of the ERA, and she made it very clear that the ERA would overturn all instances of differentiation based on sex.

Examples of additional beneficial laws and programs that would be overturned include:

The lawmakers of Pennsylvania learned the harsh results of their state ERA when gender based automobile insurance rates that favored women due to their safer driving record were disapproved by the state insurance commissioner due to a claim of sex discrimination. The lawmakers quickly passed a law allowing gender based insurance rates, only to find that their state Supreme Court overturned the law due to the strict requirements of their state ERA. (Hartford Accident & Indemnity Co. v. Insurance Commissioner, 482 A.2d 542 [Pa. 1984] and 543-44).  Other states who have passed state ERAs have also witnessed their ERAs being used to remove beneficial laws for women. Once we pass this federal amendment, we must live under its harsh requirements which will not benefit women. Instead it will remove the many laws, programs and practices we have carefully crafted to provide women with equal opportunities for success.

Clearly the ERA will not benefit women. Instead it will force them into being treated exactly as men regardless of any biological differences. Please oppose the ERA (SJRCA4) and its strict scrutiny requirements. For those who want a women’s rights amendment in the U.S. Constitution, tell them to write a better amendment that won’t harm women.

If you’re alarmed about the impact of the ERA, please call your Illinois state representative and ask him/her to support women by voting against the ERA.

TAKE ACTION: Please contact your lawmaker by phone and email and encourage him/her to VOTE NO on the ERA (Bill #SJRCA4).  Remind them that this poorly written amendment will harm women and the unborn child.  Under the ERA we will no longer be able to recognize and provide for the biological differences between men and women.  In addition, the ERA will overturn all abortion restrictions and mandate taxpayer funding for all elective Medicaid abortions. To find contact information for your legislators, see the link below.

Please pass this on to others who will help.  If we work together, they will not have their victory.  We do not fight this battle alone.