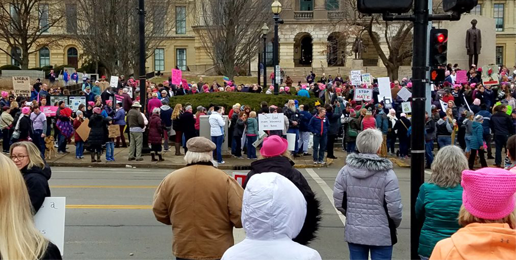 According to Illinois Review, McConnaughay made this remarkably foolish and dishonest statement in defense of her traitorous vote:

The intention of the Illinois Senate Women’s Caucus is to advance legislation that supports, empowers and protects women of all aspects of life, and that’s exactly what we are doing today. Today, we are here together, Republican and Democratic women, to demonstrate our support of the Equal Rights Amendment, which ensures equality for all women…. This isn’t a partisan issue. It’s an issue that affects every single woman in this country. By coming together, we have a chance to make an impact at a national level for women all across the nation.”

Yes, nothing says non-partisan quite like a Constitutional amendment that will mandate taxpayer-funding of abortion, that will eradicate all abortion restrictions, that will end public recognition of sex differences in private spaces, and that will require women to register with the Selective Service.

Has McConnaughay read the ERA? It says nothing about women. So, where does she get the impression that the ERA will support, empower, and protect women? Of which specific rights does she believe women are deprived?

In a recent, almost-comical article on the ERA by Jennifer Camille Lee titled “Why does a hate group want to derail the ERA in Illinois,”  Lee provides ample justification for public mistrust of the leftwing press. Before getting to the ropy meat of her “argument” about the ERA, let’s peek at just one of her false claims.

Lee identifies Nancy Thorner as “a member of IFI.” Ms. Thorner is not now nor ever has been an employee of or writer for IFI.

After erroneously identifying Thorner as an IFI member, Lee paraphrases arguments Thorner made in pieces appearing in The Madison Record and Illinois Review after which Lee says, “any Illinois citizen or legislator who uses their [meaning IFI’s] arguments against the ERA is dealing in false facts and illogical arguments from a group that purposefully pushes a hateful agenda.”

To summarize, Lee uses arguments made by someone who is not an IFI employee and published in outlets wholly unrelated to IFI to suggest that no citizen or legislator should listen to IFI’s actual arguments about the ERA.

So, let’s carefully examine Lee’s arguments—you know, assertions with evidence—and her refutation of IFI’s  arguments. Oh wait, she didn’t have any arguments and she didn’t refute anything written by any IFI member. Well, what the heck, just for fun let’s look at her rhetoric.

Lee says that Thorner wrote a “scare piece” in The Madison Record. Since Lee provided no link, title or citation, I rooted around and found a recent letter to the editor by Thorner, which I assume is the “scare piece” to which Lee is referring. Lee claimed that Thorner said, “passing the ERA will create a gender-free society where it won’t be natural for women to be homemakers any longer.”

Thorner quoted from a document written about the ERA by constitutional attorney and fierce ERA-opponent Phyllis Schlafly in which Schlafly said this:

Women’s Lib advocates do not want it to be considered any more natural for a woman to be a Homemaker than for a man to be a House-husband.

Who would disagree with that? Second-wave feminists inarguably sought to efface distinctions between men and women—well, except when they were claiming that women were far superior to men.

Lee repeatedly refers “readers back to the actual wording” of the ERA, which says that “Equality of rights under the law shall not be denied or abridged by the United States or by any State on account of sex.” Perhaps Lee didn’t notice that, while the ERA says precisely nothing about women, it does, indeed, guarantee a “gender-free society” if by gender, Lee means biological sex. You never can tell what those tricksy Leftists mean since they’re very busy redefining terms. It’s inarguable that the ERA makes it illegal to make distinctions based on sex. That’s the whole point and language of the ERA. Ergo, the ERA guarantees a “gender free society.”

Lee says that in a piece published by Illinois Review, “Ms. Thorner writes that women and all our unborn children will be irreparably harmed by the ERA.”

Evidently, Lee hasn’t read very broadly or deeply about the connection between the ERA and abortion. A court case in New Mexico, which has the equivalent of a state ERA, reveals the legal reasoning that justifies taxpayer-funding of abortion under the ERA:

The unanimous court held that a state ban on tax-funded abortions “undoubtedly singles out for less favorable treatment a gender-linked condition that is unique to women.

Moreover, as Elise Bouc, state chairman of STOP ERA Illinois has written, abortion restrictions will be overturned by the ERA, which explains why pro-abortion/anti-child organizations are fighting like the devil to get it passed:

Since abortion is unique to women, any attempt to restrict a woman’s access to abortion is seen, under the rules of the ERA, as a form of sex discrimination – because women are being singled out for a characteristic that is unique to them, and they are being treated differently based on that physical characteristic (in this case- the ability to become pregnant). Therefore any abortion restrictions would be overturned by the ERA…. In addition, since medical procedures unique to men are funded by Medicaid (such as circumcision and prostatectomies), then abortion which is unique to women, must also receive Medicaid funding under ERA requirements.

While Lee may consider the extermination of humans in the womb harmless, others beg to differ. There is no greater act of “irreparable harm” perpetrated against unborn children than killing them.

The ERA will inflict yet more damage. It will be used to grant unrestricted access to opposite-sex spaces and activities to persons who pretend to be the sex they are not. Single-sex restrooms, locker rooms, dressing rooms, shelters, semi-private hospital rooms, nursing home rooms, dormitories, colleges, athletic teams, fraternities, sororities, clubs, and organizations would become co-ed or risk federal lawsuits. Even mother-daughter/father-son/father-daughter events at public schools would be eliminated.

The ERA would be used to force women to register for the Selective Service, and if the day should ever come when the draft is reinstated, to be drafted.

It would give enormous new powers to the federal government that now belong to the states. Section II of the ERA states that “The Congress shall have the power to enforce by appropriate legislation the provisions of this article.” The ERA would give Congress the power to legislate on all those areas of law which include traditional differences of treatment on account of sex: marriage, property laws, divorce and alimony, child custody, adoptions, prison regulations, and insurance. For example, the Social Security System pays full-time homemaker “wives” 50 percent of their husband’s benefits over and above the check he receives. Upon their husbands’ deaths, widows receive the full benefits that their husbands had been receiving.  (The law also gives this benefit to a dependent husband, but nearly all dependent spouses are women.)

Lee believes that opposition to these changes–changes which harm women and children–is irrational. She also believes that IFI “may be entitled to an opinion, but they are not entitled to their own set of facts, and the fact is all the ERA does is grant equal protection to women under the U.S. Constitution.”

Like Lee, I will point readers and lawmakers back to the text of the ERA, which says nothing about women. It says everything, however, that lawmakers needed to know, which is that the ERA will eliminate recognition in laws, policies, and practices of the very real differences between men and women. And the victims will be primarily women and children.

This bill now moves to the Illinois House for consideration.

Here is the Illinois Senate roll call on the ERA: 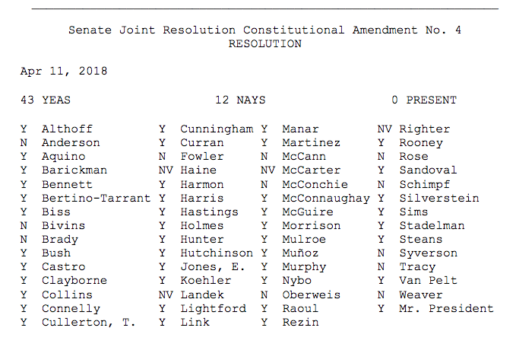