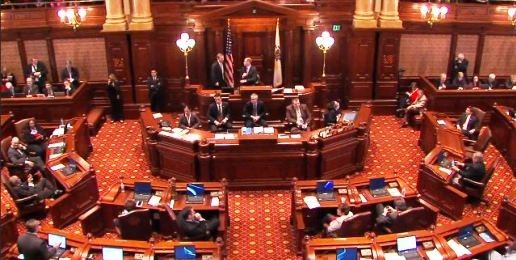 Governor Patrick Quinn is again pushing the Equal Rights Amendment (ERA) — a bill that would eliminate gender distinctions and enshrine abortion as a constitutional right.  A committee hearing for this bill is scheduled for Wednesday.

ACTION: Please CLICK HERE to contact your state senator to ask them to vote AGAINST the Equal Rights Amendment, SJRCA 75. The ERA will not help women; instead it will harm women, their families, and our society.

You can also contact your state senator in Springfield by phone by calling the Capitol switchboard at (217) 782-2000.

History and Problems with the ERA
by Elise Bouc, State Director for Illinois Stop-ERA

The ERA claims to be a simple amendment that gives equal rights to women. In reality, the ERA will actually harm women, their families, and our society. The major problem with the ERA is its wording. It simply states

“Equality of rights under law shall not be denied or abridged by the United States or any State on account of sex.”

In essence, women are not being guaranteed equal rights; rather gender is being removed as a legal characteristic on which to base distinctions. Thus any laws or policies that make a distinction based on gender would be unconstitutional under the ERA.

Because 18 states have passed state ERA’s, we have been able to see the damage that would be caused by a national ERA. This same wording in state ERA’s has been interpreted by courts to remove the critical protection of wife and child support, mandate state funding of elective abortions (as only women receive abortions, refusal to provide funding for abortions is seen as a form of sex discrimination), and legalize same-sex marriage.

Given the legal precedents, the passage of the federal ERA will lead to a loss of such protections as alimony, child custody, social security benefits (for women who choose to stay home with their children), exemption from the military draft registration, and exemption from front-line combat duty. A loss of such protections would harm women and their children.

Furthermore, the ERA would also transfer enormous power from state legislatures to the Federal government since it empowers Congress to enforce it. Such a transfer would create an imbalance of power between the states and the federal government and place sensitive issues under the rule of a national government that is far less responsive to individuals than the state legislatures. In addition, the ERA would empower the federal courts to determine the meaning of “equality of rights” and “sex.” In essence, we would be handing the state’s legislative power to Congress and the unelected judges of our federal courts.

Many legislators who are new to this amendment do not understand the reality of this amendment’s language and are easily led to believe that the ERA is a nice thing to do for women. It’s important that we help them understand the problems with this amendment. In addition, they need to know that women will not gain any additional benefits from the ERA. The laws that provide women with equal rights already exist. The Fourteenth Amendment of the Constitution has been interpreted by the courts to prohibit gender-based discrimination. Other existing laws that provide women with equal rights cover virtually all areas of American life – education, employment, credit eligibility, housing, and public accommodations. Thus, the ERA will only harm women and not benefit them.

Supporters of the ERA have been attempting to pass various versions of this legislation since the 1920’s. The movement gained momentum in 1972 after the U.S. Senate and U.S. House passed the ERA and sent it to the states for ratification with a deadline that it must be passed by 38 states by 1979. Thirty-five states have since ratified the amendment (with 4 of those original states later rescinding their support for the ERA after they understood the true problems with the amendment, and a 5th state declaring that their ratification would not extend beyond 1979. Whether these states will be allowed to rescind their vote is unclear). In 1979, Congress extended the deadline to 1982 (although the vote to extend the deadline did not receive a 2/3 majority vote as should be required for a Constitutional amendment). The ERA failed to gain passage by any more states by 1982 and was subsequently declared a moot issue by the U.S. Supreme Court during consideration of a court case that challenged the extension of the time deadline.

Since then, the supporters of the ERA have developed a legal strategy in which they claim that if 3 more states will pass the ERA, then Congress can retroactively extend the time deadline and make the ERA a legally binding Constitutional Amendment. A resolution in support of this action is filed in Congress each session. As a result, we have seen renewed pressure on Illinois to pass the ERA (Illinois received a great deal of pressure to pass the ERA in the 1970’s and early 80’s but wisely never passed the amendment). There are many who believe that passage by Illinois will give the ERA the momentum needed to gain the other 2 necessary states. As a result, it’s imperative that we not allow Illinois to pass the ERA.

Tell Others!
Please inform your friends and family so that they can help in contacting our state legislators. And, most importantly, please contact your state representative as soon as possible and ask them to vote against the ERA.  If you have a new state representative, please take some time to educate them on the problems with the ERA. Many of them don’t know much about this amendment and are often told by those who support the ERA that “this is just a nice thing to do for women.” We need to help the legislators understand the realities of the ERA.

With our combined efforts and prayers, we were able to stop the ERA in years past, and I know that we can do so again.

Progressive Illinois Lawmakers with Time on Their Hands (yikes)

MARRIAGE UPDATE: We Need You to Speak Out
b
a
x
r