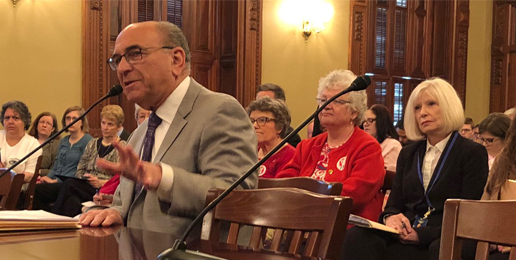 Lou Lang Swings and Misses as a Constitutional Scholar
05.22.18
PRINT

Deputy Majority Leader and Illinois State Representative Lou Lang (D-Skokie) was so impressed with the speech he prepared for the organized Chicago hearing on the ERA two weeks ago that he decided to record himself giving it. The hearing morphed into more of a rally than a public hearing as Lang bellowed into the microphone patently absurd things like “not passing the ERA means the Constitution does not protect women”. This flies in the face of the 14th amendment and was the justification in 1973 for the one thing Lang and other leftists in Springfield champion: Abortion on demand.

Watch the video yourself here:

Rep. Lang has been in Springfield for 31 years, and he urgently wants the ERA passed.  He clearly understands how the ERA will be used to advance a leftist political agenda.  Moreover, you see and hear how he angrily dismisses and denigrates the pro-family concerns some legislators have over the connection to passing the ERA  and how it will be used by pro-abortion activists to establish taxpayer funding of abortion throughout the nation.

Representative Lang railed in his statement to the committee, “This has nothing to do with abortion!”  Well, Representative Lang, if that’s true, why is Planned Parenthood, the nation’s largest abortion provider, behind it?

Representative Lang is cherry picking his facts as he bullies and manipulates members of the Illinois House (in front of the Chicago media) by telling them bluntly in this Chicago hearing that a No vote in an election year would be unwise.

Then, last Tuesday the ERA was back in Springfield for another committee hearing. Once again, Rep. Lang testified before the Illinois House Human Services Committee  using that same angry rhetoric, in an attempt to shame his colleagues into a yes vote on ERA.  To say that I was stunned is an understatement.

Three women sat with him at the hearing; all three opposed to the ERA. Apparently not seeing the humor, Lang dropped this bomb among others, “If the ERA is not passed then you are leaving women out of the Constitution and women are not protected by the Constitution currently so we must pass ERA. A no vote on ERA is anti-women.”

In case you’ve never read it, ‘women’ in not in the amendment’s language.

Three pro-life leaders — all women — testified to help bring clarity to the falsehood of this statement but not after the audience was told at the beginning of the hearing that only one proponent and one person in opposition would be heard since the all-important Chicago hearing was held the week before. Elise Bouc, State Chairman for Stop ERA was interrupted numerous times as she tried to testify against it.

Phyllis Schafly’s daughter, Anne Schlafly Cori, was able to give a historic perspective of the battle. As the daughter of national hero and the preeminent opponent to ERA, she knows first hand the battles that were fought in the 70’s and 80’s to stop the ERA from being ratified. Mary Kate Knorr of Illinois Right to Life Action also testified against the ERA.

The optics were highly ironic.  One angry male lawmaker testifying for the ERA, while three composed female advocates for life testified against it.  The paradox was only lost on the media.

The urgency of this fight cannot be overstated.  If Illinois ratifies the ERA then only one state is left to pass it and it will go before the U.S. Congress to add it as an amendment to the U.S. Constitution.

In an email update last week, Elise Bouc pointed out the frenzied activity on the pro-ERA side, saying:

[T]he supporters of the ERA are continuing to put lots of pressure on the legislators to change their votes through phone calls and emails.  They are even using a national phone banking system to generate people within target districts to call their legislators.

We can support our legislators by countering this pressure with our own phone calls and emails.  We have many principled, conscientious legislators who understand the ERA will harm women, the unborn child, and our society.  Please reach out to them and let them know you support them and are continuing to encourage them to vote no on the ERA.  Please also pass this on to others who will help contact their legislators.

Take ACTION: Please click HERE to send your state representative a message to encourage him/her to VOTE NO on the ERA (Bill #SJRCA4).  Remind him/her that this poorly written amendment will harm women and the unborn child.  Urge them to reject the Planned Parenthood-backed amendment and the bullying tactics of Lou Lang.

Please understand that if the ERA is ratified and becomes part of our U.S. Constitution we will no longer be able to legally recognize and provide for the biological differences between men and women.  In addition, the ERA will overturn all abortion restrictions and mandate taxpayer funding for all elective Medicaid abortions. To find contact information for your legislators, see the link below.

Please pass this on to others who will help.  If we work together, they will not have their victory.  There are less than 10 days remaining before state lawmakers adjourn for the summer, and the pressure to pass this legislation is mounting.  Please send an email and make a phone call to your state representative this week.  The Capitol switchboard number is (217) 782-2000.