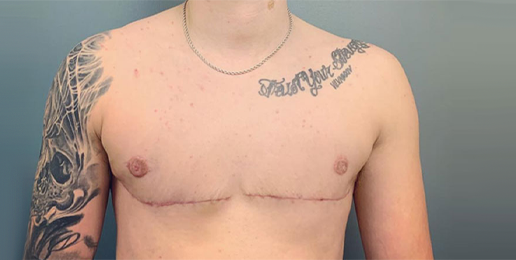 Recently, Children’s Hospital of Philadelphia, University of Virginia Children’s Hospital, Boston Children’s Hospital, Vanderbilt University Medical Center’s Transgender Health Clinic, and Akron Children’s Hospital have been under fire for engaging in experimental cross-sex hormone-doping on gender-confused teens—some effects of which are risky and irreversible—and for performing mutilating surgeries on the healthy sexual anatomy of minors. These Mengelesque procedures are beginning to pierce the consciences of Americans. While the growing outrage over what scores of hospitals and gender clinics are doing is a very good thing, it’s troubling that it’s taken this long.

Seven years ago, I wrote about Lurie Children’s Hospital in Chicago performing a double mastectomy on a 17-year-old girl from Grayslake, Illinois, whose birth name is Emily Paschal. How many more healthy breasts of minors have surgeons at Lurie lopped off since 2015?

The doctor who began Emily—now “Emmett”—on a path to affirming her metaphysical confusion via drugs was the infamous and ubiquitous homosexual, Dr. Robert Garofalo, who was profiled in a 2015 article titled “The Change Agent” published in Chicago Magazine. The profile reveals that Lurie’s lurid clinic was the brainchild of activist Garofalo:

Garofalo’s clinic, one of only 25 of its kind in the nation and the first to open in the Midwest, is pushing the boundaries of treatments for the growing population of transgender kids. In the past, patients this young were often redirected through “corrective” therapy to more gender-typical behaviors; Garofalo and his 25-person team take a much different approach: They aid these patients in transitioning.

Chicago Magazine writes about one patient of Garofalo, a boy (i.e., an actual boy) who was named David at birth, then became “Jae” in 2013, then became “Diana” in 2015 when Garofalo recommended he start doping estrogen:

It wasn’t until she [sic] was 12 and saw an episode of Oprah about transgender women that she [sic] realized her [sic] situation was more complicated. She [sic] asked her [sic] mom to make an appointment with Garofalo. The doctor immediately put her [sic] on Lupron, a treatment for prostate cancer and fibroid tumors that also happens to suppress puberty.

As with so many adolescents today, David diagnosed himself.

Prior to starting David/Jae/Diana on the estrogen-doping regimen, Garofalo gave him and his mother Lisa Salas the requisite consent form:

“There are a lot of wishy-washy statements here,” Garofalo continues as he hands them the form. “That’s because there haven’t been many studies on the long-term effects of estrogen on young people.” He pauses to look at Diana’s mother. “I wish I could tell you everything that’s going to happen, but I can’t. There’s just so much that we don’t know yet.”

And with that, the diabolical Garofalo proceeded.

Leading the way through this uncharted water is Garofalo, a 49-year-old HIV-positive cancer survivor who readily admits he doesn’t have all the answers. Since he opened the clinic—thanks to a significant grant, matched by Lurie, from a foundation run by Jennifer Pritzker, the billionaire investor and philanthropist who came out as transgender in 2013—Garofalo has emerged as a leader in the adolescent transgender field. He travels the world to speak on the topic, is regularly brought in by medical schools and hospitals to train young pediatricians, and serves as a primary investigator on a National Institutes of Health research grant focusing on transgender people.

For those who don’t know, the Pritzkers are essential members of the cabal to socially construct their deviant beliefs about “transgenderism”–or what investigative journalist Jennifer Bilek more accurately calls “synthetic sex identities,” (SSI)–in every corner of American life.

Garofalo’s treatments have to be seen as a radical form of medical improvisation, and that scares some folks.

Garofalo has historically been an outlier in the unholy quest to harm children:

Both the Endocrine Society and the World Professional Association for Transgender Health recommend waiting until patients are 16 to begin them on cross-sex hormone treatment. But Garofalo and other doctors at the clinic … will start patients as young as 14 on hormones. … Garofalo has had patients as young as 15 undergo top surgery.

Remember, this was written over seven years ago.

Garofalo and his minions at Lurid make sure they squeeze money out of everyone they can to fund their dirty work:

Transgender treatments aren’t cheap—Lupron, for example, costs $8,500 to $18,000 a year—but Garofalo works with his patients, including those on Medicaid, to help get insurance companies to cover the medications. “Nearly every patient who comes through the door gets a denial initially from their insurance,” says Ginny Scheffler, the clinic’s nurse, who spends a good bit of her time writing appeals on behalf of patients. But even those without coverage can get treatment at Lurie thanks to private donations, including one from the Chicago transgender filmmaker Lana Wachowski of The Matrix fame.

Because of the profitability of creating synthetic sex identities for minors, because of the social contagion nature of “trans” identification, because of the terror instilled in parents by profiteers and ideologues, and because of the collaborationist silence of those who know the movement is evil, a low estimate of the number of children ages 6-17 who were diagnosed with gender dysphoria in 2021 is over 42,000. That is 42,000+ children who are being exploited and harmed for profit and for the social and political goals of adults who want to normalize their perverse desires.

And now we have public elementary schools reading picture books to little ones that affirm leftist beliefs about cross-sex impersonation. We have public libraries dragging in drag queens to read stories to toddlers. We have policies that enable teachers to keep secrets from parents about their children’s cross-sex impersonation at school. We have an organization committed to finding “trans”-complicit adults to appropriate wayward confused children from their parents. And perhaps the most alarming recent development is a bill sponsored by deviant California State Senator Scott Wiener and signed into law by Governor Gavin Newsom that empowers “California courts to strip parents [from other states] of custody if a [non-parent] person takes the parents’ child to California and arranges for the child to receive gender transition procedures.”

“Trans”-cultism did not emerge on the cultural scene suddenly in the last two years. It didn’t emerge suddenly in 2015 after the disastrous Obergefell U.S. Supreme Court decision. “Trans”-cultism has been metastasizing for decades, destroying the hearts, minds, and bodies of children and teens; corrupting schools; shattering families; undermining First Amendment rights; and sexually integrating private spaces and sports.

Illinois Family Institute (IFI) has been warning about it for almost fifteen years, and so we have been watching with mixed feelings the long-anticipated, desired, and prayed-for anti-“trans”-cult movement grow.

We are thankful that at last parents and others on both sides of the political aisle are speaking out against the evil of “trans”-cultism. We are also sad and frustrated that it has taken so long for Americans in large numbers to speak out against this evil, resulting in untold numbers of children being grievously and irreparably harmed.

One of my first articles after being hired by IFI in the fall of 2008 was about lesbian Laurel Dykstra who had written a how-to article on ideologically grooming preschoolers into the “trans” cult. Her article, titled “Trans-Friendly Preschool,” was published in 2005.

My article, titled “Soulless Teaching,” summarizes Dykstra’s suggestions for indoctrinating preschoolers. Here are some of the claims and recommendations Dykstra, now a pastor, made 17 years ago. See if anything sounds familiar:

I reiterated her recommendations again in a 2018 article titled “Queering Government Schools: Just Say No.”

In 2017, when leftists everywhere were promoting the specious claim that the American Academy of Pediatrics (AAP) supports the social, chemical, and surgical “transitioning” of minor children and teens, I wrote an article exposing the disturbing way the AAP developed its position on the treatment of gender-dysphoric children. That article, titled “Do 66,000 Pediatricians Really Support the AAP’s Trans-Affirmative Policy,” outlines the secret process by which the AAP ensured its policy would reflect only leftist views.

The following year, 2018, I wrote an article titled “55 Members of the American Academy of Pediatrics Devise Destructive ‘Trans’ Policy,” exposing in greater detail the position of the AAP select-committee on harming children through profitable-but-medically-unsubstantiated protocols.

By the way, Lurid’s creepy Dr. Robert Garofalo has been instrumental in the social construction and imposition of the AAP’s non-science-based “trans” affirming policy.

In 2017, I wrote an article titled, “Things You Don’t Hear About Gender Dysphoria,” which lists 13 bulleted facts about gender dysphoria in minors and the health risks and grotesque nature of the “treatments” from which hospitals are profiting handsomely.

And still the medical cultists march on, surgical weapons unsheathed.

Dysconnected: The Real Story Behind the Transgender Explosion

Whose Children Are They?

What is a Woman?

Science-Y Fiction on Masking
b
a
x
r