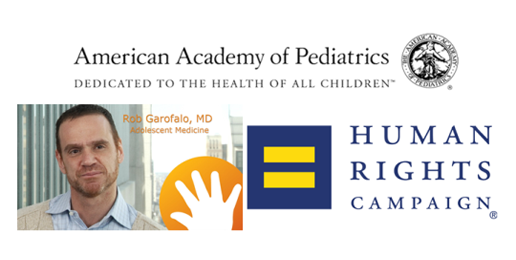 I’ve read umpteen times that the 66,000-member American Academy of Pediatrics (AAP) supports the use of opposite-sex restrooms and locker rooms in schools by gender-dysphoric students. Wowzer! 66,000? That’s a lot of pediatricians.

A few weeks ago I got to ruminating on that mind-boggling claim. It seemed implausible that all 66,000 pediatricians could believe something so radical. So, I set off on a quest to dig into this claim, and what I learned is surprising.

Fortunately for me and my quest, there’s another medical organization that has sprung up precisely because of the radical positions taken by the AAP: the American College of Pediatricians (ACPeds). You may have heard of ACPeds because the very name sends shivers of revulsion (or is it fear) up the spines of liberals everywhere. Why? Is it because ACPeds is composed of charlatans and snake oil salespersons who received their medical degrees from Rufus T. Firefly’s University of Freedonia?

ACPeds is ridiculed because it holds different positions on the treatment of gender-dysphoria in minors. Leftists are reluctant to discredit ACPeds based solely on disagreement about treatment protocols because that argument becomes circular: “You can’t trust ACPeds because it doesn’t support ‘gender affirmative’ protocols, and we all know ‘gender affirmative’ protocols are right.”

In addition to being a fallacious appeal to popularity, it also implies a factual error—or is it an alternative fact? It implies without stating that 66,000 pediatricians support co-ed locker rooms.

How many AAP members support the AAP’s policy on co-ed restrooms/locker rooms?

The truth is we have no idea how many AAP members support co-ed restroom and locker room policies (or puberty blockers, cross-sex hormone-doping, or double mastectomies for minors) because they’ve never been polled. All we do know is the approximate number of members who created and voted on the AAP’s policy on gender-dysphoric students.

Well, more accurately some people know the approximate number of AAP members who imposed this policy on the AAP. I hope to change that.

Dr. Michelle Cretella, a board-certified pediatrician who serves as the president of ACPeds shared this illuminating information about the AAP policy:

AAP Policy is created by fewer than 30 pediatricians without general member input.

In contrast, here’s a description of the process by which ACPeds develops policy:

The ACPeds has our entire membership (500 pediatric health professionals) comment and vote upon our statements prior to release. If 25% of our members object to the statement, it will not be released.

In addition, ACPeds partners with other organizations to promote views different from the views for which two dozen AAP members voted:

The 4 physician groups representing over 20K [physicians and other health experts] who affirm that transgender beliefs are a problem of the mind include the Association of American Physicians and Surgeons, ACPeds, the Catholic Medical Association, and the Christian Medical & Dental Associations.

According to Dr. Manga, while “there are dozens of AAP Sections” only a “few write policy statements” as the “LGBT Section” did. Below are the names of the seven members of the Executive Committee for the “Lesbian, Gay, Bisexual and Transgender Health and Wellness,” Section, which has only 342 members (who were unlikely to have voted on the policy).

IFI learned that at least two of these seven Executive Committee members are homosexual, so while homosexuals constitute about 3.5% of the population, they constitute almost 30% (perhaps even 40%) of this AAP committee. And another of the members has an adult homosexual child:

Anne Gramiak (not a medical doctor)

A Tufts University profile of one of the chief architects of the AAP policy, Dr. Ellen Perrin, reports that for Perrin “pediatrics is more than just medicine; it’s a vehicle for social change.” According to the profile, Perrin is a “leading expert on same-sex parenting, with her research showing that there is no relationship between parents’ sexual orientation and any measure of a child’s emotional, social, or behavioral adjustment.” Further Perrin, who was “chair of Pro Family Pediatricians—a group of pediatricians opposed to the Federal Marriage Amendment,” shared that “[a]dvocacy is one of the things I do.”

In doing research on the “Lesbian, Gay, Bisexual and Transgender Health and Wellness” Section of the AAP, I was unpleasantly surprised to learn that one of the members of the AAP’s Committee on Adolescence is none other than Chicago’s own Dr. Robert Garofalo about whom I’ve written. He is the openly homosexual, HIV-positive doctor who is the Division Head of Adolescent Medicine at Ann & Robert H. Lurie Children’s Hospital of Chicago. In a May 2015 Chicago Magazine profile of him titled “The Change Agent,”  Garofalo admits that he “has had patients as young as 15 undergo top surgery.” You read that right. Some Mengelian doctors are performing double mastectomies on physically healthy 15-year-old girls.

The AAP: a partisan political arm of the Human Rights Campaign

In terms of policy positions regarding sexuality, the AAP is now formally a partisan political organization. Six months ago, the AAP began partnering with the nation’s largest pro-homosexual/pro-“trans” activist organization: the radical Human Rights Campaign (HRC), thus discrediting it as an impartial, unbiased medical organization.

Here are some HRC recommendations  from its guide for schools:

While this guide focuses primarily on transgender youth who are transitioning from male to female or female to male, it is important to note that a growing number of gender-expansive youth are identifying themselves outside the gender binary, and many use gender-neutral pronouns. While it may be more difficult to adapt to gender-neutral pronouns, it is still important to do so in support of the student.

Another crucial element in supporting a transitioning student is giving them access to sex-separated facilities, activities or programs based on the student’s gender identity [including] [r]estrooms, locker rooms, health and physical education classes, competitive athletics, overnight field trips, [and] homecoming court and prom.

Leftists assume that hard science provides all the answers to our ethical questions, and, therefore, we need only defer to our objective scientific organizations to point the way to Shangri-La. But science does not provide answers to moral questions, and our scientific organizations are not objective. As ACPeds correctly points out, even the practice of medicine is informed by one’s worldview:

The debate over how to treat children with [gender dysphoria] is primarily an ethical dispute: one that concerns physician worldview as much as science. Medicine does not occur in a moral vacuum; every therapeutic action or inaction is the result of a moral judgment of some kind that arises from the physician’s philosophical worldview. Medicine also does not occur in a political vacuum and being on the wrong side of sexual politics can have severe consequences for individuals who hold the politically incorrect view.

If the AAP ever decides to poll its members to find out exactly how many support or oppose the radical policy concocted by the gang of 7, they best make it anonymous because there’s nothing quite like the fury of  liberals who’ve had their views scorned. Just ask Dr. Kenneth Zucker.

This version has been updated to reflect minor corrections.

We now have IFI mobile app that enables us to deliver great content based on the the “Tracks” you choose, including timely alerts, cultural commentaries, upcoming event notifications, links to our podcasts, video reports, and even daily Bible verses to encourage you. This great app is available for Android and iPhones.