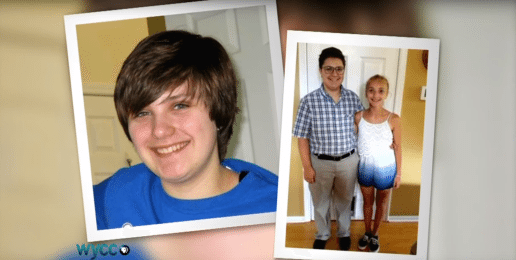 “We have lived for too long in a world, and tragically in a Church,
where the wills and affections of human beings are regarded
as sacrosanct as they stand, where God is required to command
what we already love, and to promise what we already desire.”
~ N.T. Wright

WYCC-TV, a public television station in Chicago, recently aired an imbalanced 6-minute segment on the sad story of a 17-year-old gender dysphoric teen from Gurnee, Illinois. “Emmett” Paschal (née Emily), who attends Warren Township High School, is a girl who wishes she were a boy. “Emmett” recently underwent a double mastectomy and began taking the cross-sex steroid testosterone in her quest to conceal her objective biological sex.

The amputation of “Emmett’s” healthy breasts took place at Lurie Children’s Hospital where homosexual HIV-positive pediatrician Dr. Robert Garofalo, the director of the Center for Gender, Sexuality and HIV Prevention, oversees the program that also administers male hormones to “Emmett” that will leave her permanently sterile.

Dr. Scott Leibowitz, child and adolescent psychiatrist in Lurie’s Gender and Sex Development program, absurdly states that “We don’t offer anything that would have any long-lasting negative or irreversible effect unless this is truly a kid who’s older, who can make a wise decision, whose family is supportive.”

The absurdity and ignorance of this statement cannot be fully appreciated without knowing that “Emmett” concluded just one year ago that she is “transgender” after experiencing suicidal ideation and happening upon the term “transgender” on an Internet forum.

Sterility isn’t the only side effect of cross-sex hormones. A PBS Frontline article explains that cross-sex hormones put minors at a “higher risk for heart disease or diabetes later in life. The risk of blood clots increases for those who start estrogen. And the risk for cancer is an unknown, but it is included in the warnings doctors give their patients.”

So, Dr. Scott Leibowitz believes that a “kid who’s older”—still a minor, but an older minor—is “wise” enough to make a decision regarding body-mutilating surgery, lifetime sterility, and increased risk of life-threatening diseases.

A certain percentage of young people, er, children who present as gender non-conforming as children may not persist as gender-nonconforming when they’re adolescents or adults. Nobody really knows the exact percentage. And no one really knows what are the factors that are going to contribute to, like what might cause someone to persist or not persist.

Garofalo is either surprisingly ignorant or playing dumb. According to liberal sex researchers Dr. Eric Vilain and J. Michael Bailey, by adolescence, 80% of gender dysphoric boys (and most gender dysphoric children are boys) will become “content” with their biological sex.

The Windy City Times, a homosexual publication, reported that “In order to help break gender binaries, Leibowitz also has a selection of magnetic books that allow the child to dress a girl in boy’s clothes and vice versa.” While it is important to be vigilant that too-rigid stereotypes regarding clothing and activities are not forced upon children, breaking “gender binaries” is a wholly different and destructive pursuit and one that depends on acceptance of Leftist assumptions about sexuality and “gender identity.”  Many hold the dissenting belief that it is profoundly good to accept and affirm one’s objective, biological sex.

In the quest to train gender dysphoric minors how to more closely approximate members of the sex these minors claim they already are, Dr. Marc Hidalgo, a staff psychologist with Lurie’s Gender and Sex Development Program, has recently enlisted the services of Northwestern University’s Center for Audiology, Speech, Language and Learning. Staff members offer instruction to gender dysphoric boys and girls on “how speech is produced and the differences in how men and women communicate, encompassing everything from voice pitch to body language, and worked at altering their behavior accordingly.”

Since “Emmett” just discovered a year ago that she was meant to be a boy, she did not receive puberty-blockers, which increasing numbers of gender dysphoric children are now receiving. If used too long, the most common puberty-blocker puts children at risk for osteoporosis.

Dr. Lisa Simon, a pediatrician who serves on the Lurie team, also admits that puberty-blockers may affect brain development: “The bottom line is we don’t really know how sex hormones impact any adolescent’s brain development.”

Medical professionals are permitting teenagers to choose these life-altering and dangerous interventions even though many studies attribute poor decision-making in adolescence to immature brain development. While Leibowitz describes a suicidal teen as capable of making wise decisions, experts state that the parts of the brain responsible for decision-making and responsive to rewards are not fully developed until about age 25.

Other troubling studies show that many gender dysphoric men and women who have had body disfiguring surgery still experience extremely high rates of depression and suicidal ideation. Is it within the realm of possibility that depression and suicidal ideation may arise, not from gender dysphoric children being born in the wrong bodies, but from their mistaken belief that they were born in the wrong bodies and their concomitant desire to become the opposite sex? Is it possible that the most efficacious path to alleviating their distress may lie with concerted efforts to help them accept and affirm an identity that aligns with their immutable, objective biological sex?

In light of the absence of fully developed brains, the mutability of gender dysphoria, the persistence of depression and suicidal ideation after disfiguring surgeries, and the irreversibility and risks of cross-sex hormones, wouldn’t it be more prudent and compassionate to postpone decisions regarding gender dysphoria interventions? Let’s not forget that the great and powerful Leftist Oz-es and Oz-ettes in Springfield have proclaimed that it is too dangerous for 17-year-olds in Illinois to talk about ways to diminish their unwanted same-sex attraction. Surely, if talking to a doctor about unwanted same-sex attractions is too dangerous for minors, amputating breasts or penises; rendering minors sterile; risking bone and brain development, cancer, blood clots, and diabetes should surely be legally prohibited.

Generally, it‘s “progressives” who worship at the altar of all things natural. Natural foods, natural fibers, natural living, nature unspoiled by the ruinous actions of, I guess, unnatural humans. But when nature stands in the way of their other competing dogmas, like unimpeded libidinous desire, gender deconstruction, radical autonomy, and solipsism (that is, the belief that one’s own “existence is the only thing that is real or can be known”), nature is going down. And children and teens like “Emmett” suffer.

Donate to the work & ministry of Illinois Family Institute!