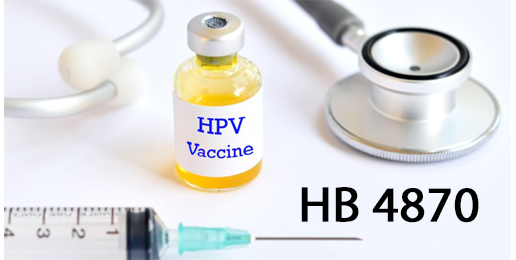 Illinois’ lesbian lawmaker Kelly Cassidy, arch nemesis of the good, the true, and the beautiful and creator of the worst legislation (e.g., the barbaric Baby Snuff Law) to come out of the fetid swamp in Springfield, and her collaborator Robyn Gabel have just sponsored HB 4870, a bill to require all children to mandate the HPV vaccine before entering middle school. And by all, I mean ALL.

This invasive, imperial diktat would apply to children in public and private schools—which includes all private religious schools (Protestant, Catholic, Orthodox, Jewish, and Muslim), and homeschools—no exceptions. Don’t be surprised, however, if an amendment is added to exempt homeschools, (maybe even religious private schools). There’s little that presumptuous, self-righteous Springfield swampsters with their super-majorities in both houses fear, but they do fear homeschool parents.

You public school parents are out of luck. You are not feared because the swampsters know that very few Christians in public schools will say or do anything in response to the outrageous diktats the swampsters pass. That’s why they’ve been able to pass their ignorant sex ed law, their ignorant “anti-bullying” law, their pernicious “LGBT” school indoctrination bill—all of which were really Trojan horses to get their pro-sexual deviance ideology into government schools.

Now that America is awash in sexual deviance, the same reprobates whose sexual ideology has caused the spread of sexually transmitted diseases are swooping in to try to fix their mess by interfering in the private lives of all parents.

Whether you choose to vaccinate your children with the HPV vaccine or not is irrelevant. This issue is about the usurpation of parental rights by a ravenous government behemoth seeking to devour not only your rights but also the minds, hearts, and bodies of your children.

Read the bill for yourself and weep—no, don’t weep. Get mad, and don’t take it anymore:

Provides that the Department of Public Health shall adopt a rule requiring students, upon entering the sixth grade of any public, private, or parochial school, to receive the human papillomavirus (HPV) vaccination and requiring confirmation that the student has completed the series of HPV vaccinations upon entering the ninth grade of any public, private, or parochial school. Provides that the Department shall adopt the rule in time to allow students to receive the vaccination before the start of the school year beginning in 2022. Effective January 1, 2021.

While Cassidy and Gabel are so sure that the HPV is completely safe that they are willing to command that other people’s children be vaccinated, many parents reviewing research like this are less certain:

The epidemiological profile of ASIA syndrome after HPV vaccination: an evaluation based on the Vaccine Adverse Event Reporting Systems

It looks like Springfield swampsters are trying to shoo every last conservative out of Illinois.

Take ACTION: Click HERE to send a message to your state representative to let him or her know that you object to political officials usurping parental rights, especially on medical issues. This is an issue that should be between parents and their pediatrician. Public officials have no moral authority mandating controversial health treatments. Ask him/her to vote against HB 4870 if comes up for a vote.