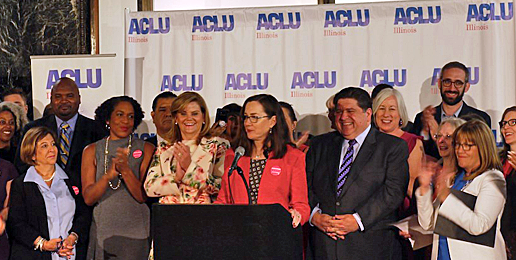 It’s official. Illinois is the now the most pernicious state in the country. Governor Jay “Baby Butchery Booster” Pritzker signed into law the Kill-Babies-Bill—euphemistically named the Reproductive Health Act—which has nothing to do with reproducing and nothing to do with health. Instead it enshrines in law that the smallest, weakest, most vulnerable humans have no legal rights and that larger, stronger, arrogant people have an absolute right to kill them. Illinois is now the nation’s bloody altar on which babies are sacrificed to the god of Autonomy that America worships.

At an obscene press conference/celebration of his signing into law the Kill-Babies-Bill, Pritzker thanked Illinois’ most morally repugnant lawmakers (which is saying a LOT), State Rep. Kelly Cassidy (D-Chicago) and State Sen. Melinda Bush (D-Grayslake), along with Planned Parenthood, Personal PAC, and the ACLU of Illinois as “true champions” for “women’s reproductive health.” Oddly, Pritzker didn’t mention the female humans (aka girls) who will never grow into women because Cassidy, Pritzker, Bush, and their accomplices signed their death warrants.

Equally repugnant were the cheers and applause from the sycophantic crowd standing behind Butchery-Booster Pritzker. Lest anyone think the term “butchery” is hyperbolic, remember that he, Cassidy, and Bush are rejoicing over the legal right of women to off their full-term babies, which means injecting their hearts with digoxin to induce heart failure, or sucking out their brains and crushing their skulls, or dismembering them. Butchery is perhaps too genteel a term.

Pritzker, Cassidy, and Bush prefer calling butchery “health care.” But neither their deceitful use of euphemistic language nor, to quote Shakespeare, “all the water in the ocean” can wash the blood from their hands. Instead, their “hands will stain the seas scarlet, turning the green waters red.”

One of Pritzker’s many applause lines was “Abortion bans don’t ban abortion. They just endanger women.” Surely, he’s not that stupid. Abortion bans do, indeed, ban abortion. They don’t end it. And murder, theft, and sexual assault bans don’t end murder, theft, or sexual assaults. But legal bans on abortion would deter abortion and reduce the number of humans slaughtered in the womb.

In an embarrassing attempt to channel John F. Kennedy who in his famous inaugural address said “Let the word go forth from this time and place,” a prideful, presumptuous Pritzker proclaimed:

Let the word go forth today from this place, if you believe in standing up for women’s fundamental rights, Illinois is a beacon of hope in the heart of this nation.

Illinois has not for many decades been a beacon of hope for the heart of the nation. Whatever flickering light remained in Illinois has now been snuffed out by Pritzker, Cassidy, Bush et al just like the babies who will be. Illinois is now a human slaughterhouse at the heart of the nation. Illinois “progressives” have turned the Land of Lincoln into a fiscal and moral mess that Pritzker’s soaring plagiarized rhetoric only illuminates. (BTW, don’t pink-hatted, “nasty,” shouting women say men aren’t permitted to opine on abortion?)

Following Pritzker came the nemesis of decency and truth, Kelly Cassidy, who with no sense of irony but lots of fake-almost-tears, declared,

There is a war against women, a war on bodily autonomy, and our opponents are using hateful, untrue, and outright misogynist rhetoric which escalates daily and endangers women everywhere.

For the umpteenth time to a party increasingly at odds with both morality and science, when women become pregnant there are two bodies—not one. If the “right to bodily autonomy” (whatever that means) comes into direct conflict with another human’s right to live, it should be obvious to all that the right to live is a right of a higher moral order than the “right to bodily autonomy.” All other rights derive from and depend on the most basic right, the right to live.

It is Pritzker, Cassidy, and Bush who endanger the greatest number of humans—including female humans. By “1965, the number of deaths due to illegal abortion had fallen to just under 200,” and in “1972 (the year before abortion was federally legalized), a total of 24 women died from causes known to be associated with legal abortions, and 39 died as a result of known illegal abortions.” Compare those numbers of tragic accidental deaths to the intentional slaughter of 61,000,000 humans in the womb in the United States since 1973 or the 426, 492 humans killed in the womb so far in 2019—including 5,544 killings after 21 weeks gestation.

The Senate sponsor of the Kill-Babies-Bill, Melinda Bush, proved herself as foolish as Cassidy and Pritzker saying,

We believe that women should have the same autonomy over their bodies that men do.

Bush paused waiting for a beat for adulatory applause for that curious notion. No worries, her henchwomen/handmaidens picked up her cue and dutifully obliged, tepidly clapping for, I guess, men’s right to abortion.

I will close with these words from JKF’s inaugural address—words that Pritzker chose not to plagiarize:

[T]he same revolutionary beliefs for which our forebears fought are still at issue around the globe–the belief that the rights of man come not from the generosity of the state but from the hand of God…. Let both sides join in creating a new endeavor, not a new balance of power, but a new world of law, where the strong are just and the weak secure…. ask of us here the same high standards of strength and sacrifice…. With a good conscience our only sure reward, with history the final judge of our deeds, let us go forth to lead the land we love, asking His blessing and His help, but knowing that here on earth God’s work must truly be our own.