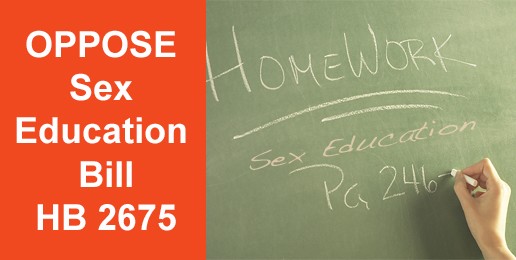 Editor’s Note:  This bill could be called for a vote as early as this afternoon.
Please take a few minutes to contact your state senator today!

As noted in my last article on the comprehensive sex ed bill (HB 2675), no lawmakers in the Illinois House who supported the bill, including the sponsors, provided any research-based evidence during floor debates proving the superior effectiveness of comprehensive sex ed. In response to an inquiry from an Illinois citizen, State Representative Robyn Gabel (D-Evanston) provided two articles and one study in defense of her support for this troubling and unnecessary bill (currently any school district is free to use comprehensive sex ed curricula). Her use of these particular pieces of evidence demonstrates exactly what’s wrong with both this bill and the sloppy way it’s been promoted in Springfield.

The bill’s supporters cited the high rates of teen pregnancy and STDs as the reasons this proposed law is necessary. If passed this bill would mandate the use of what are called “comprehensive sex ed” or contraceptive-based “Sexual Risk Reduction” (SRR) curricula, while banning the use of what are called “abstinence-centered,” or “Sexual Risk Avoidance (SRA)” curricula in any school district that teaches about sexual health, which is virtually every school district in the state.

The two articles cited by Gabel are “Abstinence-Only-Until-Marriage Programs: Ineffective, Unethical, and Poor Public Health,” and “Review of Key Findings of ‘Emerging Answers 2007’ Report on Sex Education Programs.” The one study is “Abstinence-Only Education and Teen Pregnancy Rates: Why We Need Comprehensive Sex Education in the U.S.”

In addition to making arguable claims about abstinence education, neither of the articles even claims that comprehensive sex ed is more effective at reducing rates of teen pregnancies and STDs.

And the one study Gabel cites is a deeply flawed study from the University of Georgia (UGA) that addresses only teen pregnancy.

Mary Anne Mosack, National Director for State Initiatives of the National Abstinence Education Association writes this about the UGA study:

This study is a weak attempt to correlate high birth rates in states to abstinence education. Even the most basic understanding of research protocols, cautions against claiming causation based on correlation.  This study draws a very simplistic conclusion to the complex problem of teen pregnancy. There are numerous factors contributing to high teen birth rates not the least of which are family structure, poverty and cultural environment.

However, this study attempts to draw conclusions for a subset of the population (only students in abstinence education classes) by looking at data for an entire state population to establish their findings. This showcases an extremely flawed study design that not only invalidates findings but calls into question the motivation behind a study that purports to seriously inform public policy based on scientific rigor.

By examining state sex education laws alone the researchers make the erroneous conclusion that these laws accurately reflect what is actually being taught in schools and make no mention of the percentage of students in a state who actually received abstinence classes, a serious research error on which to base such sweeping conclusions!

Vast field experience across the country shows that contraceptive-based programs have been implemented in every state regardless of the law. Even the very anti-abstinence Guttmacher Institute concluded that only 25% of schools across the country were receiving abstinence education during the decade examined in this study. In actual practice, no state can be categorized as “abstinence-only.”

Further considerations must note this study does not indicate how a state is trending. Are they moving in the right or wrong direction? It is clear that abstinence opponents would like to take all the credit for the recent positive drop in teen birth rates while disingenuously attacking abstinence education. Producing a flawed study to make that claim is sad commentary on what should be a sincere attempt to effectively reach the youth we are trying to serve.

Here are two lessons we should learn from this embarrassing attempt by Rep. Gabel to justify the legal banning of the use of abstinence-centered education:

SRA abstinence education teaches that “having sex” can potentially affect not only the physical aspect of a teen’s life but also, as research shows, can have emotional, psychological, social, economic, and educational consequences as well. That’s why topics frequently discussed in an SRA abstinence education class include how to develop a healthy relationship, how to avoid or get out of a dangerous, unhealthy, or abusive relationship, developing skills to make good decisions, setting goals for the future and taking realistic steps to reach them, understanding and avoiding STDs, information about contraceptives and their effectiveness against pregnancy and STDs, practical ways to avoid inappropriate sexual advances, and why saving sex for marriage is optimal.

Remember, if the evidence provided by our lawmakers doesn’t specifically address STD and teen pregnancy rates, it’s irrelevant. And if the evidence doesn’t prove conclusively that comprehensive sex ed is consistently more effective than abstinence-centered education in reducing teen pregnancy and STD rates, there is no justification for legally prohibiting the use of abstinence-centered curricula.

Here are two articles of particular relevance on this website:

NAEA Report: Considerations for Protecting Teen Health: Part I will refute point by point the claims from the Guttmacher article on the effectiveness of comprehensive sex ed that Rep. Gabel cites.

Take ACTION: Click HERE to send an email or a fax to your state senator today to ask him/her to vote NO to HB 2675.  You can also call the Capitol switchboard number at (217) 782-2000 and ask to be transferred to your state senator’s office or call IFI for their number.