The 2020 post-election plot thickened on Sunday when Trump legal team attorneys Rudy Giuliani and Jenna Ellis announced that Sidney Powell was not a member of the Trump legal team. Naturally, questions and theories about the reason for the separation flooded social media full of sound and fury but signifying nothing.

It is hoped that within a few weeks, we will learn much more about the nature and degree of voter “irregularities” and electronic malfeasance, which in an ideal political world would be a bipartisan issue.

One of the more grotesque demonstrations of leftist non-sense and hypocrisy was demonstrated a week ago following an episode of the wildly popular Disney show The Mandalorian when “Baby Yoda” eats the unfertilized eggs of a Frog Woman who is transporting her eggs to her husband so he can fertilize them thereby preventing their species’ imminent extinction. Fans of Baby Yoda freaked out, incensed at the lighthearted treatment of what they deemed genocide by the beloved Baby Yoda.

The moral incoherence and hypocrisy should be obvious. In the Upside Down where leftists live, when a human mother hires someone to …

Marijuana Is More Dangerous Than You Think

Posted on January 4, 2019 by David E Smith
As legalization spreads, more Americans are becoming heavy users of cannabis, despite its links to violence and mental illness.
Posted in Marijuana | Tagged Alex Berenson, Cory Booker, Journal of Interpersonal Violence, mental illness, National Survey on Drug Use and Health, Recreational Marijuana, Social Psychiatry and Psychiatric Epidemiology | Comments Off on Marijuana Is More Dangerous Than You Think

Jews as Parasites and Jews as Termites: From the Nazis to Farrakhan

Posted on October 22, 2018 by David E Smith
There is no hiding the ugliness of Louis Farrakhan’s latest antisemitic comments, in which he likened Jews to termites. There is one thing you do with termites. Exterminate them! Termites are destructive. Termites are nasty. Termites survive by destroying. Termites do nothing good. Rid the earth of them
Posted in Faith, Media Watch | Tagged Cory Booker, Jan Tollenaere, Jews, Louis Farrakhan, Nazi, Raymond Tollenaere, Shmuley Boteach, termites, Times of Israel, Twitter, Utrecht University | Comments Off on Jews as Parasites and Jews as Termites: From the Nazis to Farrakhan

Posted on October 3, 2018 by David E Smith
A vast divide now exists among Americans. It is far more than a political rift between Democrats and Republicans. It is not merely a struggle between conservatives and liberals. The true nature of this conflict centers on how we shall live as individuals and what values we shall uphold as a nation. The facts at hand are not encouraging.
Posted in Marriage/Family/Culture | Tagged Brett Kavanaugh, Christine Blasey Ford, Cory Booker, Donald Trump, Dr. Daniel Boland, FBI, Jimmy Kimmel, Kamala Harri, Kristen Gillibrand, Mazie Hirono, Rachel Mitchell, SCOTUS, U.S. Senate | Comments Off on Beyond the Kavanaugh Event: America’s Fading Traditions

Thursday, we witnessed again an arrogant Leftist lawmaker demonstrate his disregard for constitutional principles—specifically for the First Amendment’s religious protections and the prohibition of a religious test for holding office.

Here is the astonishing exchange:

Booker: I do want to give you a chance to speak on your comments about gay and lesbians. You said in a speech that morning in America that endorses perversion and calls …

This afternoon, we witnessed again an arrogant Leftist lawmaker demonstrate his disregard for constitutional principles—specifically for the First Amendment’s religious protections and the prohibition of a religious test for holding office. 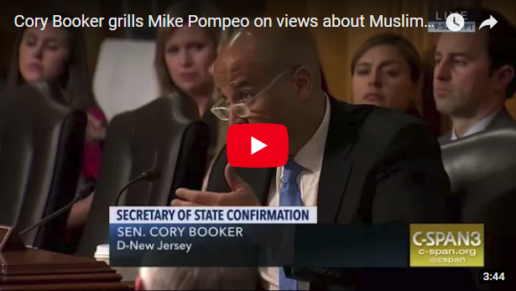 Should the Government Force Some Religious Americans to Violate Their Beliefs About Marriage?

Posted on August 11, 2015 by David E Smith
Now that the U.S. Supreme Court has ruled in favor of gay marriage, a question arises: Should we protect the rights of Orthodox Jews, Roman Catholics, Evangelical Christians, Latter-Day Saints and Muslims who believe that marriage is a union of husband and wife? Two bills recently introduced in Congress show diverging answers. One seeks to promote tolerance and peaceful coexistence; the other adds fuel to a culture war by treating that traditional belief as racism.
Posted in Religious Liberty | Tagged Cory Booker, David Cicilline, Equality Act, First Amendment Defense Act, General Donald Verrilli, Human Rights Campaign, Jeff Merkley, Mark Oppenheimer, Samuel Alito, Tammy Baldwin | Comments Off on Should the Government Force Some Religious Americans to Violate Their Beliefs About Marriage?