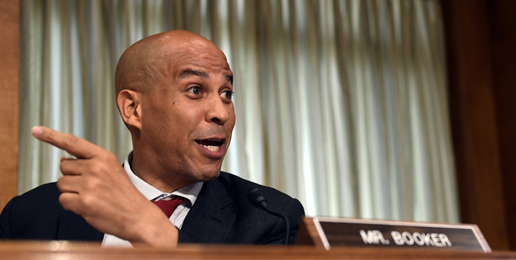 The intellectually incoherent U.S. Senator Cory Booker (D-NJ) sought to apply an unconstitutional religious test for office today when interrogating nominee to the D.C. Circuit Court of Appeals Neomi Rao. Perhaps hoping everyone listening were idiots, he first attempted an indirect tactic by asking her this irrelevant question, the answer to which is none of his business: “Are gay relationships in your opinion immoral?”

Word to the seriously unwoke Booker: Americans—including judicial nominees and judges—are entitled to think sexual activity between persons of the same sex is immoral.

When Ms. Rao questioned the relevance of his inquiry, the smug Booker responded,

But his reasoning—if it can be called that—is worse than circular. His questions imply an analogy between race and homosexuality when there are literally no points of correspondence between the two conditions. Does he understand what an analogy is and what it requires?

Here’s a primer regarding this particular and particularly unsound analogy for the dull-witted “progressives” among us: Race—as understood in such analogies—is a 100% heritable, non-behavioral condition, immutable in all cases, and objective. In contrast, homosexuality is a non-heritable, and in some—perhaps many–cases mutable condition that is constituted by subjective feelings and volitional behaviors that are legitimate objects of moral assessment.

A far better analogue for homosexuality would be polyamory, so, if Booker wants to continue his  moralistic and judgmental line of questioning on irrelevant matters with judicial nominees, he should ask them if they think polyamorous relationships are immoral, to which nominees should respond, “What possible relevance are my beliefs on the morality of particular types of sexual unions?”

Then Booker transmogrified from arbiter of morality to constitutional ignoramus by asking Rao,

Do you believe [“gay” relationships] are a sin?

Whoa, hold up there, cowboy.

The Constitution expressly prohibits religious tests for office, so what the heck was he doing asking Rao for her theological position on homosexual relationships?

The Senate Judiciary Committee should not be… an avenue for persecution.

We’ve seen a growing pattern among Senate Democrats of hostility to religious faith…. I was deeply troubled a few minutes ago to hear questioning of a nominee, asking personal views on what is sinful.

I don’t believe this is a theological court of inquisition. I think the proper avenue of investigation is a nominee’s record. So let’s look at your record, which is what this committee should be looking at, not our own personal religious views, or your religious views, whatever they may be.

I would defend—die for—to protect the ideals of religious freedom in our country. And I was in no way trying to attack the nominee’s religious freedom. I was simply saying that discrimination under any standpoints, whether it’s religion, someone’s race, someone’s sexual orientation, should not be tolerated….[R]eligion was used as a ruse to discriminate against African Americans.

For someone who wasn’t trying to attack the nominee’s religious freedom, he did a pretty darn good job of doing just that by framing his question in a way that implied her unfitness to serve on the court. The hubris of Booker’s attempt to reframe his accusatory question about Rao’s moral and theological beliefs is mind-boggling. He would no more die for the right of theologically orthodox Christians to freely exercise their religion than CNN would fact-check anti-Trump news stories.

During the campaign, someone should ask armchair theologian Booker if he thinks theologically orthodox views of homosexuality are immoral and sinful.

This isn’t Booker’s first religious-test rodeo. Remember the Booker inquisition of Mike Pompeo in which Booker asked Pompeo if he thinks “it’s appropriate for two gay people to marry,” and asked, “Is being gay a perversion,” and asked, “Do you believe gay sex is a perversion? Yes or no.”

Lesbian Chai Feldblum, until recently a commissioner on the Equal Employment Opportunity Commission whose reappointment was thankfully blocked by U.S. Senator Mike Lee (R-UT),  said this about such conflicts long before the Obergefelle decision legalized same-sex faux-marriage:

[L]et us postulate that the entire country is governed – as a matter of federal statutory and constitutional law – on the basis of full equality for LGBT people….

Assume for the moment that these beliefs ultimately translate into the passage of laws that prohibit discrimination based on sexual orientation… [G]ranting this justified liberty and equality to gay people will likely put a burden on… religious people….

That is because I believe granting liberty to gay people advances a compelling government interest, that such an interest cannot be adequately advanced if “pockets of resistance” to a societal statement of equality are permitted to flourish, and hence that a law that permits no individual exceptions based on religious beliefs will be the least restrictive means of achieving the goal of liberty for gay people….

In blocking Feldblum’s reappointment Lee, said, “Don’t think for a second that you, your family, and your neighbors will be left alone if Feldblum gets her way.” The same can be said about Booker.