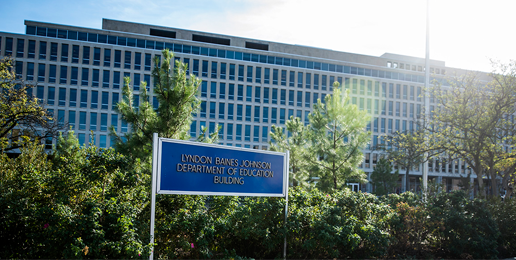 Pushing Back the Indoctrination
Written By Robert Knight   |   10.07.20
PRINT

From the president on down, we’re seeing a welcome pushback against Marxist indoctrination in our colleges, government agencies, and even the military.

It had better happen soon, too, because in K-12 schools, hapless children are being subjected to the awful, anti-American 1619 Project and Black Lives Matter curricula. But at least there is movement at the top of the academic and government food chains.

In Maine, Republican state State Senator Lisa Keim has written a forceful letter to the University of Maine System board, objecting to University of Southern Maine President Glenn Cummings’ order for everyone on campus to “align” with Black Lives Matter.

After explaining that “racism, in any form, has no place in our state,” she lays out BLM’s radical agenda, which is “antithetical to many Americans’ political and religious views.” She quotes anti-police statements from BLM’s website such as: “law enforcement doesn’t protect or save our lives. They often threaten and take them.”

She adds, “These slurs are fueling hate and violence all over our country.”

BLM, which is openly Marxist and demonizes white people and America, calls for defunding the police and “disrupting the Western prescribed nuclear family structure.”

Colleges receiving federal funds must certify they don’t discriminate.  So, Assistant Secretary Robert King wrote to Mr. Eisgruber, forcing the issue: Is Princeton racist? If so, give us back the money.To keep federal research funds flowing, Princeton officials are going to have to admit that their leader falsely portrayed the campus as a hotbed of racism.  In June, they removed Klan-loving Woodrow Wilson’s name from the public policy school and a residential college, so that’s a start, I guess.Not surprisingly, more than 80 liberal university presidents have signed a letter asking the Education Department to stop picking on poor little Princeton.  They think the government’s time is better spent harassing nuns.

The Trump administration has also banned the teaching of Critical Race Theory in federal agencies and the military. Popularized by late leftist academic Derrick Bell, Critical Race Theory employs Marxist class theory, substituting race for economics. All whites are racists, America is irretrievably racist, and denial of being a racist or failing to confess “white privilege” is proof of racism. Sounds a lot like Princeton, or so we’re told.

Recall that U.S. Senator Bernie Sanders (I-VT) got unhinged during Mr. Vought’s 2017 confirmation hearing as deputy OMB director. He said the nominee was unqualified because of his Christianity. Mr. Vought buys into the biblical view that all people are flawed and equal before God — and precious in His sight and therefore equal under U.S. law. He won’t be bullied into divisive, identity group policies that Democrats favor. No wonder Bernie got so heated. He knows the enemy when he sees it.

Wonder if Democrat U.S. Senators Cory Booker (D-NJ), Kamala Harris (D-CA), or Dianne Feinstein (D-CA) will lose it for the same reason when they vet Amy Coney Barrett for the Supreme Court? They’ve attacked other nominees for being Christian. But I digress.

On Sept. 22, President Donald J. Trump let the other shoe drop by signing an executive order barring federal funds from contractors who employ Critical Race Theory in diversity training, including in the military, where unity and trust are paramount.

“It is difficult to imagine a more demoralizing course of instruction for officers who will soon lead soldiers, sailors, airmen, and Marines into combat,” writes Center for Military Readiness President Elaine Donnelley in The Federalist. “Unresolved accusations and suspicions of racism eviscerate mutual trust and team cohesion, two things essential for survival and mission accomplishment.”

Since 1971, the Defense Race Relations Institute has conducted racial sensitivity training. Among the materials were Robert Terry’s 1970 book “For Whites Only,” which “taught militant black separatist ideas to white audiences,” according to Capital Research Center filmmaker Joseph (Jake) Klein.

Other federal entities such as the FBI used the Southern Poverty Law Center as a source for materials and identification of “hate groups” until their far-Left agenda was exposed.  It took an SPLC-inspired gunman attempting mass murder at the Family Research Council in 2012 to alert people to the SPLC’s smear campaign against Christian groups that continues to this day.

Contempt for religion and family is a major part of BLM and the Left’s culture war on America, as explained by Maine State Senator Keim in her letter opposing BLM’s inroads.

“A family unit of one man married to one woman is not only a Western prescription for family; it’s a Biblical one,” she writes. “Therefore, mandating the University’s faculty, students and staff to subscribe to BLM’s political message arguably violates those individuals’ freedom of religion.” Spot on.

If America is going to rise beyond the current climate of Marxist race-baiting, it’s going to take more leaders like State Senator Keim and Russell Vought at all levels.  Plus, a president who gets it and keeps doing something about it.

This article was originally published at Townhall.com.
His website is roberthknight.com.