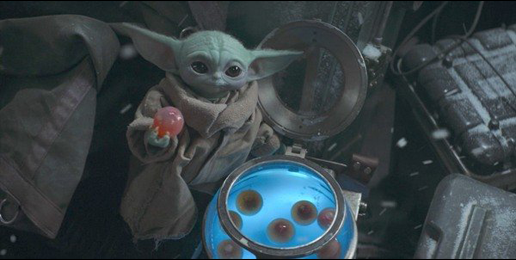 The Ideological Non-Sense and Hypocrisy of Leftists
Written By Laurie Higgins   |   11.19.20
PRINT

One of the more grotesque demonstrations of leftist non-sense and hypocrisy was demonstrated a week ago following an episode of the wildly popular Disney show The Mandalorian when “Baby Yoda” eats the unfertilized eggs of a Frog Woman who is transporting her eggs to her husband so he can fertilize them thereby preventing their species’ imminent extinction. Fans of Baby Yoda freaked out, incensed at the lighthearted treatment of what they deemed genocide by the beloved Baby Yoda.

The moral incoherence and hypocrisy should be obvious. In the Upside Down where leftists live, when a human mother hires someone to dismember her own fertilized human egg—aka human fetus/embryo/baby—they demand that society affirm, celebrate, and shout the execution of those tiny humans. In fact, the voluntary dismemberment of fertilized human eggs at any gestational age is so morally innocuous and such an unmitigated public good that leftists think all Americans should pay for the executions of humans in utero.

In the Upside Down, the genocidal killing of all fertilized human eggs with Down Syndrome is at best morally neutral if not morally good, but the fictional devouring of unfertilized Frog Critters’ eggs is morally repugnant. Just wondering, if fertilized human eggs are parasites so devoid of personhood as to render them morally legitimate objects to kill, if it’s okay to dismember them because they’re imperfect non-persons, would there be anything wrong with eating their remains?

Leftists views on the slaughter of fertilized human eggs is just the most grotesque of their many morally incoherent views. Here are a few more:

Votes cast with paperless voting machines cannot be subjected to a manual recount, and so there is no way to determine the real election results if they are hacked. H.R. 1 …  mandates paper ballots.

In order to detect hacks, this bill requires election bodies to conduct audits of all federal elections, regardless of how close the election, by employing statistically rigorous “risk-limiting audits.”

To create the illusion that they’re not hypocrites and to defend their intolerance, exclusion, divisiveness, hatred of persons, book banning, speech suppression, demand for ideological uniformity, and efforts to circumscribe the  exercise of religion—which for Christians extends far outside the church walls—leftists resort to fallacious reasoning. The fallacies they employ are too numerous to list, but two of their faves are the ad hominem fallacy and the fallacy of circular reasoning.

Ad hominem is an informal fallacy in which an irrelevant personal attack replaces a logical argument. It proves nothing about the soundness, truth, or falsity of a claim. Instead it appeals to emotion and silences debate through intimidation.

The fallacy of circular reasoning occurs when the conclusion presumes the premise (i.e., the initial claim) is true without proving it true. So, for example, leftists–ignoring their purported commitment to the First Amendment–argue that homosexual acts are moral acts and, therefore, there is no need to tolerate the expression of dissenting views. But the intolerance they are trying to defend is based on the truth of their premise that homosexual acts are moral—a premise they simply assume without proving is true.

After employing fallacious circular reasoning and hurling ad hominem epithets at their opponents, leftists sanctimoniously wipe the dust off their dirty hands and assert that their hypocrisy isn’t really hypocrisy after all.

Hope in Dark Times
b
a
x
r