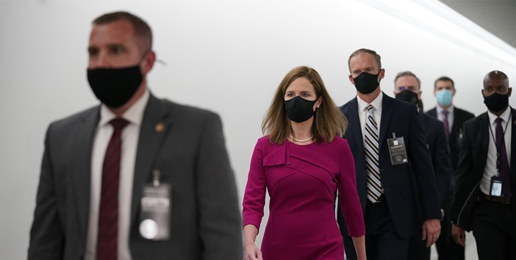 Well, they dusted off those colorful “Handmaid’s Tale” outfits that were so visible at Brett Kavanaugh’s U.S. Supreme Court confirmation hearings in 2018.

Even before Amy Coney Barrett’s hearing on Monday before the U.S. Senate Judiciary Committee, the Democrats were being cheered on by permanently angry women (and maybe some men) dressed in red cloaks with white duckbills extending from their hoods.

This is the uniform of the oppressed women in Hulu’s serialization of Margaret Atwood’s dystopic, anti-Christian novel. If you thought atheist crusader Philip Pullman’s thinly disguised depiction of church authorities as evil in “The Golden Compass” book and movie were bad, Ms. Atwood runs circles around him.  In her 1985 book and TV series, the polygamous men cite Bible verses and treat the women as sex slaves.

Braving the rain on Monday, the demonstrators held signs festooned with messages such as a giant NO! in rainbow colors over “Trump/Pence Must Go!”

This time around in the U.S. Senate star chamber, the Democrats who pretend to honor religious liberty while assailing nominees’ faith think they have a smoking gun. The word “handmaid.”

Women leaders in the group, including Mrs. Barrett, previously held the title of “handmaid,” which is derived from Jesus’s mother Mary’s own description of herself in Luke 1:38 as “the handmaid of the Lord.”

The group dropped that title in favor of “women’s leader” because “the meaning of this title has shifted dramatically in our culture in recent years,” a spokesman said.

Mrs. Barrett, 48, now serves on the Seventh Circuit Court of Appeals, to which she was nominated by President Donald J. Trump in 2017.  At that time, U.S. Senator Dianne Feinstein of California said at a hearing that Mrs. Barrett’s religious beliefs worried her because “the dogma lives loudly within you.”

Wow. Talk about open religious bigotry. But it’s OK because the senator is a Democrat, and they get to do this sort of thing. It’s not as if the media would have a problem with it.

Ah, those “former members.” You can always dig up a dissident or two to make the point you want, unless you’re reporting on Black Lives Matter or the Democratic National Committee, which are pretty much the same thing.

As for People of Praise, here’s more from their own media statement provided to Heavy.com:

A majority of People of Praise members are Catholic, and yet the People of Praise is not a Catholic group. We aim to be a witness to the unity Jesus desires for all his followers. Our membership includes not only Catholics but Lutherans, Anglicans, Methodists, Pentecostals and nondenominational Christians. What we share is a common baptism, a commitment to love one another and our teachings, which we hold in common.

Freedom of conscience is a key to our diversity. People of Praise members are always free to follow their consciences, as formed by the light of reason, experience and the teachings of their churches.

As the Apostle Paul instructs, and many biblically sound churches teach, men are to be the spiritual leaders in the church and in their own households and they are to love their wives as they love themselves. This is considered scandalous by our cultural commissars.

In Ephesians 5:25, Paul writes: “Husbands, love your wives, just as Christ also loved the church, and gave Himself for her.” That means laying down your life if necessary.  It’s why when things go bump in the night, the guy should be the one who goes downstairs with the baseball bat or the Sig Sauer.

Democrats are terrified of the attractive and articulate Mrs. Barrett, a mother of seven, just as they were threatened by Clarence Thomas, who destroyed their narrative that blacks belong on the leftist plantation.

Mrs. Barrett has impeccable credentials that the U.S. Senate already examined when she was nominated for the appeals seat.  At that time, the “handmaid” reference didn’t get traction, since the TV version of “The Handmaid’s Tale” only debuted in April of that year.

In the meantime, we’ve seen U.S. Senator Cory Booker (D-NJ) take a page from Bernie Sanders and grill Secretary of State nominee Mike Pompeo in 2018 about sex and marriage, strongly implying that his traditional Christian views are a form of bigotry. Booker likes to make much of his own Christian faith, which apparently is free of the burden of having to abide by crystal clear biblical principles regarding sex.

During Monday’s hearing, Mrs. Barrett had to face the likes of Booker, Feinstein and Harris, plus the troupe of “Handmaid” harridans.

After the process is over and Associate Justice Barrett is sworn in, the “ladies” can make further use of their costumes.

After all, Halloween is right around the corner.

This article was originally published at Townhall.com. Follow Robert Knight on is a His website is robertHknight.com.