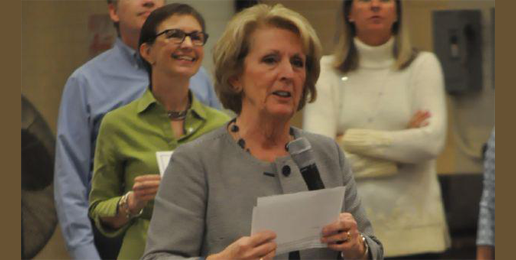 A controversy has been percolating in the affluent communities served by New Trier High School on Chicago’s North Shore. It’s a controversy that has implications for public schools all over the country—and not just high schools—so I hope taxpayers in other communities pay attention.

Taxpayers should pay attention to the activity that generated the controversy, the admirable actions taken by courageous community members who are fighting for intellectual diversity, and the reactionary obfuscation of administrators and community members who strive to censor dissenting resources.

Two weeks ago I wrote about the upcoming “All-School Seminar Day 2017” being held at both New Trier campuses on Feb. 28. Here is a brief excerpt from that article:

A perusal of the list of workshops being offered at this mandatory event reveals a Leftist dream for “education.” No need to travel to the next White Privilege Conference. New Trier parents can just send their kids to school for a smorgasbord of ideologically non-diverse seminars on “Understanding Today’s Struggle for Racial Civil Rights.”

An article in the Winnetka Talk, a local Pioneer Press paper owned by the Chicago Tribune, illuminates the problems corrupting public education in general and New Trier’s anti-diversity day specifically (all quotes are from this article):

District Supt. Linda Yonke said students must attend the keynote speech and a 50-minute homeroom presentation, but students who are uncomfortable with anything in the sessions will be able to leave.

Setting aside the reality that the vast majority of high school students would not admit to being uncomfortable even if they were (well, maybe some safe-space snowflakes would), the central issue is not student comfort. The central issue is ideological diversity. The central issue is whether both “progressive” and conservative perspectives should be presented through the materials and speakers included on Seminar Day.

Wilmette father Mark Glennon accurately described the seminar offerings as “flagrantly and unquestionably politically extreme.” Winnetka Talk cited Glennon’s wish for the seminar, a wish that all parents of children in public schools should share:

“What I’d like to see happen is simple: just some balance in what’s presented,”… [Glennon added] that debate among New Trier parents and residents has caused strife in an otherwise friendly community.

Strife develops whenever conservative community members finally reach their tipping point with regard to the egregious bias that infects academia at all levels.

“Progressives” drunk with their own power, presumptuously believing they alone know what is good and true, and accustomed to imposing their views with abandon don’t take kindly to resistance.

Winnetka Talk reporter Kathy Routliffe writes that “Seminar supporters…say the planned speakers and discussions will allow New Trier students to make up their own minds in a balanced manner on a crucial American social issue.”

How does an imbalanced seminar facilitate a “balanced manner” in which students can make up their own minds on a crucial issue?

But there it is. There’s the argument I predicted would emerge when I first wrote about the brewing brouhaha:

School administrators and faculty often respond to parents who challenge obvious bias and viewpoint discrimination by saying that students are free to express dissenting views, but that’s a red herring. The central issue is not whether students are free to express dissenting views. The central issue is whether all students should have their views challenged by the voices of experts or just conservative students. Should all students have the opportunity to have their views reinforced through reading and hearing the voices of experts or is that opportunity reserved just for “progressive” students?

New Trier father Paul Traynor is adamant about the importance of this non-diversity day:

“Not only is this a great lineup of programming, but an essential day for our kids….My sense is that this day is overwhelmingly popular across political lines, and that the opposition, although clearly well organized and very vocal, is very small.”

I wonder if Traynor’s “sense” about the bipartisan popularity of this ideologically-biased day is a sixth sense or if he’s polled a broad cross-section of New Trier community members, making sure that conservatives and “progressives” are equally represented.

While one can reasonably argue that it is essential for public schools to discuss race in America, this particular “programming” is decidedly not essential. If it were “essential,” (i.e., “absolutely necessary”), what does Traynor think about the quality of education New Trier students received prior to 2016 when this “essential” programming was introduced for the first time?

Traynor apparently believes that the size of the group opposing the ideological imbalance on non-diversity day justifies the administration’s dismissal of their views. So, what does that say about Traynor’s commitment to diversity and minority voices?

I would agree with Traynor on this one point: non-diversity day is in reality a “programming” day.

According to the Winnetka Talk, Superintendent Yonke is amazed at the positive response to non-diversity day:

I have had well over 300 phone calls, emails, and letters of support saying “Don’t change it, it looks fabulous….The direct communication we’ve had has been far more in support than in opposition. In fact, I’ve never seen this kind of outpouring of support on an issue in my life as an educator.

I would submit that the reason Yonke has never seen this kind of “outpouring of support on an issue in her life” is that conservatives rarely organize or oppose the kinds of offenses against sound pedagogy that have been poisoning public education over the past few decades. The outpouring of support for non-diversity day at New Trier likely began after some parents started questioning and publicly criticizing the stunning absence of intellectual diversity on Seminar Day. There’s nothing quite like the bracing antipathy of a “progressive” challenged to include conservative viewpoints.

So, why doesn’t this kind of organized opposition to leftist curricular and extracurricular shenanigans happen more often?

The second reason why opposition to the use of government schools for promoting “progressive” dogma is revealed in the comments from a Northfield mother:

Another supporter, Northfield resident Laura Shala Balson, whose son is an elementary school student, said she was “horrified” when she read the opposition group’s website.

“I’m a transracial parent. My husband and I are white and one of our children is black…I know we live in a well-off community that’s largely homogenous [sic] and white, but this is just the total opposite of the 10 years we’ve lived here. People have been kind and welcoming, just the opposite of this opposition.”

Please note that “transracial” parent Balson asserted that this “homogeneous and white” community is a kind and welcoming community—not a bigoted, hateful community.

It’s passing strange that Balson would be “horrified” that some New Trier parents would seek to include diverse voices on the topic of race, or that she would suggest that those who seek such diversity are unkind and unwelcoming. I would think the failure of seminar organizers to include speakers and resources from diverse perspectives would be far more horrifying to anyone who values diversity in education.

But that’s what many “progressives” do if their ideas are challenged: hurl epithets. While “progressives” claim to value diversity, they call names when conservatives suggest that commitments to diversity and critical thinking on complicated issues entail exposure to the best thinking on all sides of those issues. Including the perspectives of, for example, Ben Carson,  Larry Elder, Mia Love, Star Parker, Jason Riley, Thomas Sowell, Shelby Steele, Carol Swain, Stephanie Trussell, or Allen West—all of whom are black—does not constitute being unkind or unwelcoming.

Another mother assumes this biased event will foster critical thinking:

Wilmette resident Ruthie Swibel…said her support for the day “is based on giving students the benefit of the doubt of thinking critically about issues. If we canceled events because we didn’t want to talk about complicated issues, what message does this send to our school’s students?”

The seminar day has a budget of $30,000, and “will not portray any political party as good or bad or promote the views of one party.”

Seriously? Okay, fine, the seminar day teachers and speakers will likely avoid using the words “Democrat” and “Republican,” but can anyone read the session descriptions and say with a straight face that they don’t reflect Democratic positions? Enquiring minds would love to know how many of the invited speakers or authors of resources vote Republican.

Paul Traynor is satisfied with not only the content of the seminar but the degree of involvement the administration provided to the community:

Traynor said the district did involve parents, and gave them plenty of time for input: “They sent out an email before the holiday break saying ‘Here’s the game plan.’ … so these folks who say there was no consultation, no outreach, that’s just false.”

I would challenge Traynor’s claim that an email sent out after the event was planned constitutes parental involvement, “consultation” or “outreach.” It would be more accurate to say that parents were notified about the planned event just before the busy holiday break. Parents were not included, involved, or consulted during the planning stages. I wonder if the game-plan email expressly told parents that most if not all seminar offerings espouse “progressive” views on racial (or “trans”) issues.

Don’t miss our third annual Worldview Conference featuring world-renowned theologian Dr. Frank Turek on Sat., Feb. 18, 2017 in Barrington. Dr. Turek is s a dynamic speaker and the award-winning author of “I Don’t Have Enough Faith to be an Atheist”

This is a wonderful opportunity to enhance your biblical worldview.