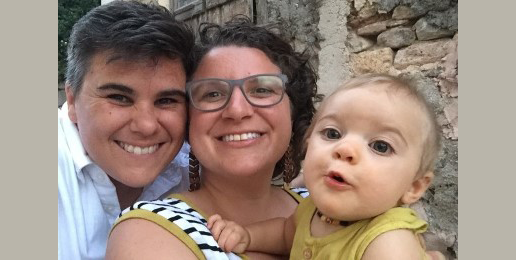 In case you missed this unfortunate story, it all started back at the end of September when lesbian activist and attorney Kristina Wertz and her partner, activist Kara Desiderio, sent an email to Highlights magazine expressing their disappointment that Highlights doesn’t depict homosexual families in their Hello magazine for babies. Wertz and Desiderio, both of whom formerly worked for the Transgender Law Center in San Francisco, have a 13-month-old daughter. Two weeks later, Wertz, who now works for an organization called Funders for LGBTQ Issues, posted their email on the Highlights Facebook page:

One of the reasons we appreciate Hello is the diversity represented—families of all races, interracial families and grandparents. We are consistently disappointed, however, in the complete lack of same-sex parents in Hello magazine. I think a lot about the things that create culture—the subtle and not so subtle messages that our kids get about how the world works. Since becoming a parent, I feel keenly aware of the messages kids’ books send to tiny minds.”

For much of our readership, the topic of same-sex families is still new and parents are still learning how to approach it with their children, even the very little ones. We believe that parents know best when their family is ready to open conversation around the topic of same-sex families….We will continue to think deeply about inclusion—specifically how to address it in developmentally appropriate ways for our broad audience.

Well, you can imagine how that went over with homosexuals who will not tolerate any public recognition or expression of views of homoeroticism with which they disagree.

The Highlights Facebook page blew up with angry responses from tolerance-teachers and homo-parents, and once again Highlights tried to mollify the angry hordes, assuring them that because of Highlights’ commitment to diversity, inclusion, corporate evolution, and helping “children become their best selves,” it was just a matter of “‘how’” and “‘when’”—not “‘if’”–Highlights would feature an LGBTQ family.”

Non-judgmental Leftists took to the Internet to put forward their best “arguments” against conservatives—that is to say, ad hominem attacks like this one from the website She Knows: “The loathsome One Million Moms calls for Highlights boycott…One Million Moms, an…association of grotesque hate-mongers.”

Maria Guido, senior news editor for the ideologically non-diverse Scary Mommy website, criticizes for its failure to be as comprehensively Leftist as Scary Mommy is on matters related to homoeroticism:

[Highlights magazine’s] first response was laughably offensive. Why? Because it basically said, “we know a certain part of our audience is against gay marriage and we don’t want to lose their money,”… Guess what, Highlights? If people boycott your brand because they’re bigots, that is a sword you have to fall on, as far as the rest of the population of decent, inclusive humans is concerned.

Yes, all those who believe that the needs of children are best served and their rights best protected when they are raised by mothers and fathers are “bigots” while those who believe homoeroticism is good and moral are “decent, inclusive humans.”

We know that there are many ways to build a family, and that love is the essential “ingredient.” This conversation has helped us see that we can be more reflective of all kinds of families in our publications. We are committed to doing so as we plan future issues.

Those who know that homoerotic relationships and structures are profoundly immoral, that they deny children their intrinsic rights, and that they undermine human flourishing are left with the challenge of removing their children from contexts in which they will be exposed to body- and soul-destroying ideas and images. And they are obliged to remove from their home resources that promote lies as truth and do so in imagery that appeals to innocent minds.

It’s no longer possible to boycott every business that affirms homosexuality and biological sex-rebellion. That’s why organized, targeted (pun intended) boycotts are important. That said, boycotting Highlights is a low-cost, high-yield endeavor. If every conservative family cancels their subscriptions explaining exactly why, perhaps Highlights management will rethink their capitulation to the increasingly draconian demands of homosexuals. And as you contemplate canceling, know that Leftists are encouraging their cohorts to subscribe in order to support Highlights’ effort to indoctrinate children with pernicious ideas.

If, however, fear of those who place sexual deviance at the center of their identities paralyzes Highlights management, canceling subscriptions remains a high-yield endeavor: It protects the hearts and minds of our little ones from destructive ideas. I agree with Scary Mommy Maria Guido when she says to Highlights, “You don’t get to have it both ways—either lose my money, or lose theirs.”

Perhaps we would be bolder, more tenacious cultural activists if we thought like lesbian activist Kristina Wertz who got this muddied ball rolling:

I think a lot about the things that create culture—the subtle and not so subtle messages that our kids get about how the world works. Since becoming a parent, I feel keenly aware of the messages kids’ books send to tiny minds.

Take ACTION: Click HERE to send a message to Highlights CEO Kent Johnson via their public relations department to let him know that the decision of Highlights management to expose young children to ideas and images that many find destructive and age-inappropriate compels you to cancel your subscription and/or refrain from purchasing gift subscriptions for your grandchildren, nieces, nephews, or friends.