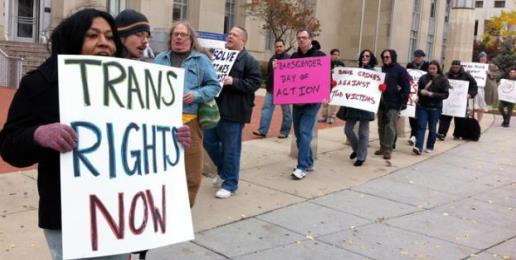 For decades the Left has embarked on a science- and morality-defying quest to advance a sexuality ideology that undermines human flourishing. There is no better illustration of that than the radical “trans”-formation of America with regard to “transgenderism.”

“Progressives” invent or reinvent language to serve their ideological purposes. So, let’s simplify and clarify matters. In this article, “sex” refers to one’s objective, immutable biological sex. “Gender” is a synonym for sex. “Gender identity” refers to a person’s subjective feelings about his or her sex. Men who pretend to be women are pretend-women. And men and women who accept their sex are normal men and women (not “cismen” or “ciswomen” as Leftists call them).

The most radical demand made by Leftists is that society must sexually integrate spaces in which private activities are engaged in, that is to say, activities that involve bodily functions and undressing.

Much of the opposition to co-ed restrooms, locker rooms, showers, shelters, and semi-private hospital rooms focuses on the risks posed to women when objectively male persons are allowed in these private spaces.

Leftists respond that there is no evidence that men who wish they were women pose any risk to women and that pretend-women have been using women’s restrooms for years without incident. What this argument ignores is that allowing cross-dressing men into women’s private spaces makes it easier for male predators to access women’s facilities by claiming to be “transwomen.”

One of the tropes Transjacktivists use to promote and legalize their desire to eliminate female spaces is to assert that males with GID are speshul snowflakes or claim that males wouldn’t adopt transgenderism in order to prey on women. Or that males who are arrested repeatedly for getting off on watching women perform intimate activities (in places they assume they are free from males) wouldn’t go through the trouble of putting on a wig that makes those same activities legal….Are you out of your mind? Why wouldn’t a guy who risks arrest repeatedly to invade women’s space comply with measures which make his activities legal?? It’s considerably less inconvenient to put on a skirt and some lippy than to be arrested and processed, make bail, go before a judge, etc….

The truth is guys do this sh*t all the time. And they’ll do whatever it takes to perv on females. Here are some of the things they’ll do to get into female spaces:

The logical outworking of the “trans” ideology

So, let’s make this quagmire a tad more quaggy and miry.

In challenging current “genital-based” restroom policies, Leftists snottily ask who will be performing “genital inspections.” Let’s assume sexuality-perverts (i.e., those who seek to pervert a proper understanding of all matters sexual) manage to win “gender-identity-based” restroom policies. Who is going to do “gender-identity” inspections? What will society do with those who “identify” as genderfluid, bigender, or trigender? What will be required to establish a “transwoman” or “transman” identity? Must they cross-dress? Take puberty-blockers? Take cross-sex hormones? Have their breasts amputated and fake-penises affixed to their nether regions or conversely have their testes amputated and fake breasts affixed upstairs? In Barack Obama and Loretta Lynch’s brave new world, nothing would be required for men to access women’s locker rooms other than their assertion that they “identify” as women.

Now that cross-dressing has been released from the confines of closets and more elaborate disguises are chemically and surgically available, restroom and locker room use has been complicated. Pretend-men whose use of cross-sex hormones, body-mutilating surgeries, and cross-dressing render them visually indistinguishable from actual men does complicate restroom use for actual men and for women who won’t want bearded ladies in their facilities. Allowing pretend-women, whose expensive costumes conceal their immutable nature, to use opposite-sex restrooms and locker rooms becomes equally problematic.

But who’s to blame for this new problem?

The blame rests with those who subordinate commonsense and truth about the nature and meaning of objective, immutable sex to disordered subjective desires and perverse ideas about objective, immutable sex. And now the chief promoters of sin-bred foolishness and confusion are asserting that society has a moral obligation to acquiesce further to the corrosive effects of their sin-bred confusion and foolishness.

How are Leftist organizations making headway in public schools? They’re doing so by abusing Title IX of the Education Amendments of 1972 that prohibits discrimination based on “sex” in public schools. Unelected Leftist bureaucrats with no lawmaking authority in Obama’s Department of Education decided that the word “sex” in Title IX includes “gender identity.” Based on that fanciful redefinition, they have made the ludicrous claim that schools are prohibited from maintaining separate restrooms or locker rooms for objectively male and female students.

To make this rhetorical leap, these bureaucrats ignored this pesky part of Title IX:

A recipient [of federal funds] may provide separate toilet, locker room, and shower facilities on the basis of sex.

Let’s hope that the new administration undoes the damage done by the Obama Administration.

Leftists who focus their efforts on delegitimizing concerns over safety ignore that safety is not the only concern. The other and equally important issue concerns the meaning of sexual differentiation. Policies that mandate that restroom and locker room usage can no longer correspond to sex embody the false idea that the objective sex of humans has no intrinsic meaning relative to modesty and physical privacy. Accepting such a subversive notion paves the way to the end of sex-segregation everywhere.

Policies mandating co-ed restrooms and locker rooms in our elementary, middle, and high schools embody and teach lies. They teach all children that in order to be kind, inclusive, and socially just, they must relinquish their privacy. Such policies teach that physical embodiment as male or female has no intrinsic meaning related to modesty and privacy.

The Left is attempting the same rhetorical slight of tongue with Title VII of the Civil Rights Act of 1964, which is even broader and therefore more dangerous in its application. Even churches may be vulnerable to federal lawsuits based on charges of “sex” discrimination.

If schools, churches, restaurants, health clubs, hospitals, and shelters are prohibited from “discriminating” based on either objective biological sex or “gender identity” (i.e., subjective feelings about sex), their private spaces will inevitably become co-ed. Once objectively male gender-dysphoric persons are allowed in women’s restrooms, on what basis would normal men be prohibited from entering  women’s restrooms? Prohibiting men from accessing women’s restrooms because they’re men would be unjustifiable because objectively male persons would have already been granted access, and prohibiting men from accessing women’s restrooms because they’re “cisgender” would be deemed discrimination based on “gender identity.” And so the Leftist agenda to eradicate all public recognition and respect for sexual differentiation will have been achieved.

This is a crucial battle to fight.

Language matters. “Progressives” understand this more than conservatives. Do not use opposite-sex pronouns when referring to gender-dysphoric persons who are pretending to be the sex they are not. Do not use the terms “transgender,” “transman,” “transwoman,” or “cis” anything.

Do not share restrooms or locker rooms with opposite-sex persons. Ignore the false accusation that valuing the feelings of modesty and desire for privacy that derive from sex differences is a sign of hatred and ignorance.

And fight policies in your local schools that mandate the grammatically incorrect use of pronouns and that permit co-ed restrooms and locker rooms. Yes, lawsuits are expensive, but fighting for the right to recognize and respect sexual differentiation in private spaces in public schools is worth the cost.

Cub Scouts Reject Girl Who Wishes She Were a Boy