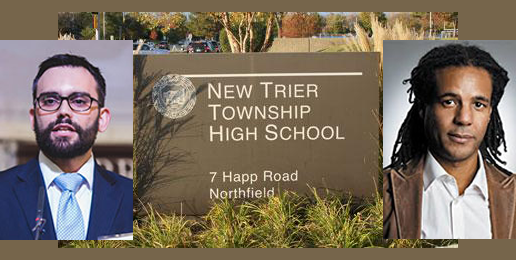 Conservatives claim that government schools are in the tank for “progressivism” and that “progressive educators” lie when they claim to value diversity. There is no better evidence for those claims than the upcoming “All-School Seminar Day 2017” on Feb. 28 at New Trier High School (both campuses), which serves the affluent communities of Northfield and Winnetka, Illinois.

A perusal of the list of workshops being offered at this mandatory event reveals a Leftist dream for “education.” No need to travel to the next White Privilege Conference. New Trier parents can just send their kids to school for a smorgasbord of ideologically non-diverse seminars on “Understanding Today’s Struggle for Racial Civil Rights.”

Esteemed Chicago attorney Joseph Morris describes the seminar as “a rather bold and raw effort at hard-left propaganda with decidedly anti-American, anti-free-market, anti-family, anti-parent, and bigoted biases on display.”

In our quixotic quest for the holy grail of education–ideological diversity–let’s meander about the day’s agenda (click here and here) to learn about some of the workshops and speakers.

Andrew Aydin is the keynote speaker at the Northfield campus. Aydin is a policy advisor to liberal congressman John Lewis. Aydin has contributed to the ethically impoverished Southern Poverty Law Center and the dystopian feminist comic book Bitch Planet.

Monica Trinidad “will share her organizing work with We Charge Genocide….She will then lead a hands-on workshop that will guide participants through a discussion of the Black Lives Matter movement today.” Trinidad “is a queer, latinx artist and organizer born and raised on the southeast side of Chicago.” The word “Latinx” was invented by those who detest “gendered” anything, including language. The goal is to “move beyond gender binaries….Latinx…makes room for people who are trans, queer, agender, non-binary, gender non-conforming or gender fluid.”

OiYan A. Poon: “Dr. Poon challenges students to critically analyze systems of higher education, student affairs practices, and to understand their power to transform oppressive structures as social justice change agents…. she received….a 2013 National Distinguished Educator award from the Pacific Education Group’s Courageous Conversations Summit.” An award from the Pacific Education Group is confirmation that Poon is a Leftist.

Suggestions for ideological diversity on race

I can almost see the scornful scowls on the faces of the organizers of New Trier’s All-School Seminar Day at the thought of exposing students to assumptions about race with which they—“progressive” dogmatists—disagree.

What can parents do?

It should be obvious that it’s not ideological diversity that we find in government schools today. It’s ideological incest committed by Leftists. And the kind of de facto censorship of conservative ideas that is corrupting New Trier’s All-School Seminar Day is what transmogrifies education into indoctrination.

Your support of our work and ministry is always much needed and greatly appreciated. Your prayers for our safety as well as for wisdom and direction are vital. Your promotion of our emails on Facebook, Twitter, and to your own email network is a huge part of our success in being a strong voice for the pro-life, pro-marriage and pro-family message here in the Land of Lincoln.