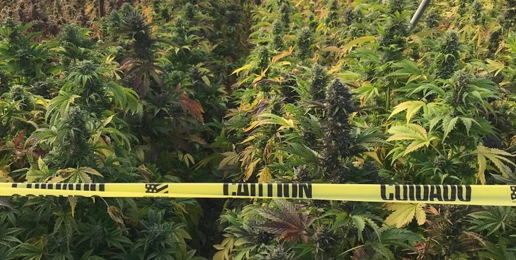 Big Marijuana and its foolish proponents easily convinced Illinois state lawmakers that legalization would decrease black market trade and ease the burden on our criminal justice system. IFI warned them that this naive notion was contradicted by the facts, and we shared ample evidence from states that had already approved “recreational” marijuana. The evidence is clear: the black market had been thriving because of legalization.

Now we read that the California cannabis industry is in big trouble and want lawmakers to do something about it. What’s their problem? The black market is doing 73 percent of California’s marijuana business – or $8.7 billion. (Read more HERE.)

California is considered to be the largest cannabis market in the world. While 2019 is not yet over, it’s estimated that their total marijuana sales will top nearly $12 billion.

Yes, the black market is thriving on the left coast, growing by leaps and bounds, and threatening to bury a quasi-legitimate (sic) industry. So much for the influx of revenue they’re anticipating.

According to Michael Steinmetz, CEO of the marijuana company Flow Kana, they are also having to cut marijuana industry jobs. Prior to legalization, weed proponents also promised more jobs.

If it wasn’t so serious, it would be laughable. But it is no laughing matter.

Of course, the black market is thriving in California. And it will grow here in Illinois because lawmakers were foolish enough to legalize, ignoring both California and Colorado as prime examples of the serious consequences of this ill-advised policy.

The black market doesn’t pay taxes. They don’t pay a minimum wage. They don’t follow regulations. They don’t purchase licenses or pay any fees (also known as taxes). They don’t pay workman’s compensation insurance or any of the overhead associated with running a brick-and-mortar establishment. The result is cheaper, but much more potent marijuana, which is what consumers of weed want.

But with black market activity comes other serious problems. One being much more marijuana than they’re able to regulate and control. As in California and Colorado, our communities will be flooded with “legal” plus black market weed.

Chelsea Clarke is the Strategic Intelligence Unit Supervisor for the Rocky Mountain High Intensity Drug Trafficking Area in Colorado. She says that law enforcement is busier now dealing with black market activity post legalization than they were beforehand.

Furthermore, policy makers have sent a dangerous message to our young people. First, we called it “medicine.” Now, we call it “recreational.” Gone are the days of “this is your brain on drugs.” Instead, we are welcoming the marijuana industry and boutique retail stores to our neighborhoods so that we can tax its use and provide a new revenue stream to bail lawmakers out of years of their overspending.

As a result, Illinois citizens will be lulled into a diminished understanding of the dangers of drug use until it affects them personally. As the perception of risk plummets, drug use (and addictions) will climb rapidly.

“It’s no big deal.” That’s Big Marijuana’s approved message and it is being taught to our children and our culture.

Why did state lawmakers choose to send such a terrible message and set this example for our children and grandchildren? Just for a puny new revenue stream?

They don’t understand that multiple studies show that when young people under 25-yrs-old regularly use today’s potent marijuana, they can lose up to 8 IQ points permanently. Some studies are available HERE, HERE and HERE. Why is it that the new Illinois law gives the green light to anyone 21 years or older to use when we know, empirically, that permanent brain damage is a legitimate risk of regular use?

It isn’t very difficult to see what problems are right around the corner as more drugs become freely (and cheaply) available.

While marijuana is growing the black market, it’s also poisoning our water and land on public lands. Black Market (mostly) marijuana is found to be laced with chemical rodenticides, pesticides and other toxins used by illegal weed growers to ward off animals that eat their plants, who are then found dead mere feet from the plants, along with dead flies that have feasted on the carcasses. These chemicals then leach into the land and water. Most of the chemicals that authorities have found at these black market grow sites are banned in the U.S. and Europe because of their extreme toxicity. One eighth of a teaspoon of one such chemical, Carbofuran, will kill a 300-pound bear.

Dr. Mourad Gabriel, an expert in wildlife pathology, earned his Ph.D in Comparative Pathology at the University of California Davis. He spent time sharing with us what he regularly finds when he goes into these illegal grow sites in California, accompanied by armed guards. He also spoke about the thriving black market.

Educate yourself on the harms of high potency marijuana. Teach your children that drug use is a deadly trap. Teach them about addictions and how hard they are to break. Contact your local city council members to urge them to ban retail sales of marijuana in your community. Find a local state candidate running for office who opposes legalization and get involved in his/her campaign.