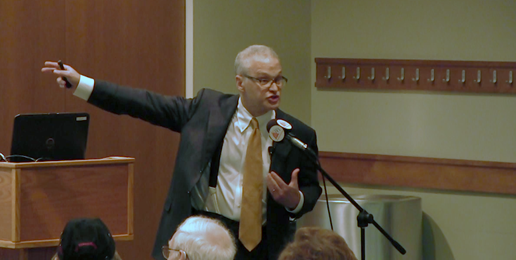 Many people advocate for the legalization of marijuana from a position of bias, but Dr. Raymond Bertino opposes legalization on the basis of truth – medical facts and economics realities that expose the lies of recreational pot proponents.

In a January 2019 town hall forum hosted by Illinois State Representative Marty Moylan (D-Des Plaines), Dr. Bertino outlines the grim future that lies ahead for the largest group of marijuana users, young adults aged 18 to 25. He presents data that proves frequent marijuana use causes physical damage in critical brain development, which in turn leads to an alarming trend of “failure to launch” in this vulnerable age group.

In addition to detailing the physical, emotional, and social damage caused by pot, Dr. Bertino also does the math, proving that supporters’ claims that legalized marijuana will solve Illinois’ fiscal woes just don’t add up.

Take ACTION: Please click HERE to send a message to your state representative and state senator to urge them to oppose any and all efforts to legalize marijuana. Ask them to oppose SB 7, and tell them you don’t want your more impaired workers on job sites, more impaired drivers on the road, more young people being sucked into a life of addiction and local hospitals having to deal with all of this.