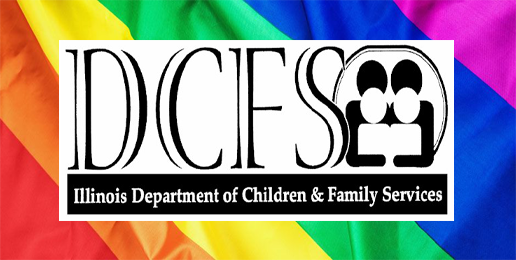 In an act of stunningly brazen wickedness, foolishness, and hubris, the Illinois Department of Children & Family Services (DCFS) has made radical revisions to policies regarding children who experience homoerotic attraction and/or gender dysphoria.

The DCFS, controlled—like every other government agency in Illinois—by ignorant “progressives,” has declared war on children and potential foster and adoptive families by changing rules to make affirmation of children’s homoerotic attraction and/or sexual confusion an absolute condition for employment, fostering or adopting, volunteering, or contracting with the DCFS.

Last night, DCFS director George Sheldon–Rauner’s pick in 2015–resigned, becoming the 8th director or acting director to leave the DCFS in the past five years. Sheldon leaves while still a subject of an ethics investigation and while the DCFS faces sustained and intensifying criticism for actions that have resulted in incomprehensible suffering for and even deaths of children under their care. In the midst of this turmoil, DCFS bureaucrats see fit to make radical rules changes that will further harm children.

If you can stomach it, read Appendix K of the DCFS procedures document titled “Support and Well-Being of Lesbian, Gay, Bisexual, Transgender and Questioning (LGBTQ) Children and Youth.” It promotes every doctrinaire and arguable assumption of the far Left’s sacred sexuality ideology and even includes a Leftist lexicon for use in their indoctrination efforts.

1.)  A statement of purpose which mandates that everyone who works directly or indirectly with or for the DCFS—including all staff, volunteers, potential foster or adoptive families, and private agencies that contract with the DCFS—must affirm the homoerotic desires and/or biological sex-rejection of children under the care of DCFS (and I use the word “care” loosely).

2.)  Directives on how the DCFS will impose Leftist beliefs about homoeroticism and biological sex-rejection,  including through “mandatory training in LGBTQ competency. Specifically, LGBTQ training will be part of the retraining Child Welfare license, will be included as part of PRIDE training, and will be included in DCFS core training. DCFS and POS staff must complete additional, mandatory standalone LGBTQ training at least once per year. Agencies must include LGBTQ training in their training of volunteers. Annual training in LGBTQ competent care is required for all child welfare providers; whether or not they believe they have care for [sic] or currently care for any LGBTQ child/youth.”

4.)  A directive on child placement which emphasizes in boldface that “In no instance should LGBTQ children/youth be placed with a non-affirming caregiver who is opposed to sexual orientations that differ from the caregiver’s own. Nor should LGBTQ children and youth be placed with caregivers who are unwilling/unable to support children and youth whose gender identity or gender expression differs from traditional expectation.”

5.)  A directive for caregivers on “choice of clothes, make-up, hairstyle, friends, and activities within appropriate boundaries (e.g., if a caregiver permits a cisgender heterosexual child/youth to date at a certain age, the caregiver may not prohibit a gay or transgender child/youth from dating). The child/youth’s chosen name and preferred gender pronoun (including gender-neutral pronouns such as “they” or “ze/hir”) must be respected.”

6.)  Advice regarding school restroom and locker room usage: “[T]ransgender students have the right to use the gendered school facilities (e.g., restrooms and locker rooms) that correspond to the student’s gender identity. Caseworkers and caregivers should assist children/youth in obtaining their school’s permission to use these facilities.” To help caregivers force schools to allow gender-dysphoric students into opposite-sex restrooms and locker rooms, the DCFS refers them to two of Illinois’ most vigorous promoters of sexual deviance: the ACLU and Illinois Safe Schools Alliance.

7.) A directive on body searches that states that “If a DCFS child/youth is to be body searched, cross-gender searches of transgender youth are prohibited. The child/youth most be searched by someone of the same gender as the child/youth’s gender identity unless the child/youth requests otherwise.” To clarify, this means that if a girl who identifies as a boy must be body-searched, the search must be conducted by a man—unless she objects because, you know, she’s actually a girl.

These changes are rationalized by the DCFS as serving the welfare of self-identified “LGBTQ” children. In the view of DCFS, these children cannot flourish unless their homoerotic desires or rejection of their sex is affirmed. In the view of DCFS, safety requires non-judgmentalism—well, except for their judgmentalism that permeates these changes and which, like arsenic in a cup of tea, is undetectable and lethal.

This is a government experiment based on Leftist theories being performed on children who can neither understand what is being done to them nor offer informed consent. And we taxpayers are footing the bill for an experiment that harms children.

The DCFS evidently doesn’t see the irony in its command that “Staff may not impose personal, organizational or religious beliefs on LGBTQ children, youth and families, and in no way should personal beliefs impact the way individual needs of children/youth or families are met.”

The entirety of the DCFS changes constitutes the imposition of arguable, leftist “personal and organizational beliefs” on children, youth, and families that will “impact the way the individual needs of children and youth are met.” The fact that the DCFS is imposing a set of beliefs through policy is revealed in its absurd, reality-denying reference to a “child/youth’s sex assigned at birth.” That is Leftist language. No child is “assigned” a sex at birth. The objective sex of children is identified at birth, and that sex can never change.

There is no research proving that children are best served by having gender dysphoria affirmed. The best research to date suggests that if gender dysphoria is not affirmed in young children, it diminishes over time. Do the omniscient powers that be at the DCFS believe it’s better for children to endure castration or double mastectomies, a lifetime of cross-sex hormone-doping with its unknown health risks, and social struggles than to accept their immutable sex? And do these government bureaucrats know with absolute certainty that when children experience a mismatch between their bodies and their subjective, internal sense of being male or female that the error rests with their healthy bodies?

Quite obviously, these changes preclude people of theologically orthodox Christian faith from fostering or adopting children who experience same-sex attraction or gender dysphoria. Denying people of theologically orthodox faith the opportunity to foster or adopt these children constitutes the antithesis of a commitment to diversity and puts the lie to DCFS’s claim to care about the needs of children. The number of available foster and adoptive families for these children who are in desperate need of love, guidance, and wisdom, will decrease. Children will be deprived of truly good families, families with mothers and fathers who can distinguish truth from falsehood. Through these changes, the DCFS has proven that the desires of adults supersede the needs of suffering children.

Take ACTION: Click HERE to contact Governor Rauner, your state senator, and state representative to express your opposition to the outrageous revisions made by the DCFS, which impose a far left-wing sexuality ideology under the cover of a purported effort to help children. In reality, these revisions harm children and families who would otherwise be willing and able to foster and adopt children who struggle with issues related to sexuality.

Birth Certificates and the Cultural Extinction of Biological Sex

Questions About Restrooms and Locker Rooms Leftists Must Answer