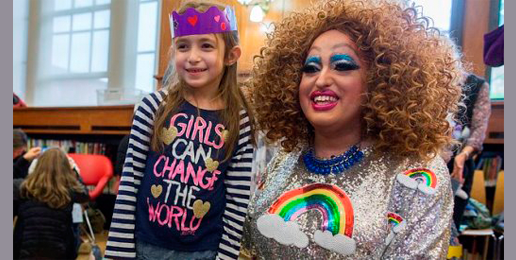 Pray for our nation’s little ones. If they manage to survive the womb and are lucky enough to have both a mommy and a daddy, they may end up at their local library or bookstore for story time with drag queens. I kid you not. A widely circulated Associate Press (AP) news video exposes the repugnant spectacle.

To the occasional titters of foolish mothers, glittery drag queen Lil Miss Hot Mess (henceforth referred to as Mr. Mess) read the picture book Worm Loves Worm, illustrated by homosexual children’s book author and illustrator Mike Curato who dedicates the book to his faux-husband Dan with these words, “To the worm of my dreams.”

In Worm Loves Worm, two earthworms fall in love and claim they can both be the brides and they can both be the grooms, to which Spider responds, “Amazing!” The AP video shows a closeup of the enraptured faces of children too young to think critically but old enough to be indoctrinated with lies by deceitful and feckless adults.

Worm Loves Worm was written by J.J. Austrian who explains in an interview with a mom and her two very young daughters his motivation for writing it:

The idea came about when my son who’s now almost 13 wasn’t quite 5 years old, and we lived in the Hudson Valley and we had the most wonderful neighbors Pam and Lenore who are like aunts to my children. And one night I was tucking Joe in and he looked at me and said, “Pam and Lenore are married like you and Mommy,” and at the time women couldn’t marry women in New York, and I told Joe that. And he looked at me and said, “Why not?” And I didn’t want to say, “Well, some people think it’s wrong,” because that’s such a strong word.

“Wrong” is too strong a word to be used with almost-5-year-olds? At what age does Austrian believe children should be taught right from wrong using the terms right and wrong?

Austrian then expressed some philosophically and scientifically dubious Deep Thoughts:

So, I fumbled the answer. I said, “Some people don’t think that’s natural.” And Joe looked right at me and said, “That’s dumb. They love each other.” I said, “You’re right, Joe, and your mommy and I think that, and Pam and Lenore think that, and we’re gonna change that.” And I got to thinking about that awful answer “It’s not natural,” and I thought about nature, and I thought about worms. And I thought, you see, nature doesn’t care. Nature just cares about love.

If, when thinking about his “awful answer,” Austrian thought “nature doesn’t care,” perhaps he’s been writing children’s books too long. What is this anthropomorphized “Nature” of which he speaks? About what does Nature not care?

And when he thinks about worms, he thinks “Nature just cares about love”? Really? Well then, since some critters show their “love” through infanticide, filial cannibalism, and incest, perhaps Austrian could write a picture book about bears, felines, canids, primates, rodents, insects, fish, amphibians, reptiles, and birds who kill and devour their own babies or mate with relatives (after all, love is love). And then, in the service of diversity, the Brooklyn Public Library can have a drag queen—or maybe an infantilist, drag queens are so yesterday—read it to toddlers.

I thought about worms because worms…are hermaphrodites, meaning they’re both boys and girls, and I always thought that is just amazing! And like I said, that is very natural. It shows that nature doesn’t care if you’re a boy or you’re a girl. It just cares about you loving each other. And I thought that would be a wonderful way to talk about love being love.

(Where’s an eyeroll emoji when you need one.) Why is it that sexual revolutionaries when looking to lower forms of life as exemplars of moral virtue avert their gaze from the truly icky things critters do to one another with nary a hint of a moral qualm?

Here’s another question about that pesky ole Nature: How does Austrian know that Nature doesn’t care whether humans are boys or girls, does care that they love each other, and evidently makes no distinctions between types of love?

This points to why conservatives retreat from calling sexual revolutionaries “progressive.” There is nothing progressive about looking to lower life forms for moral direction.

The interviewer’s 4-year-old daughter then asks Austrian, “Why was the boy wearing girls’ stuff and why was the girl wearing boys’ stuff?”

Austrian is unwittingly treading on dangerous PC territory here. In referring to “boys” and “girls,” he affirms the dreaded—and to many trannies, mythical—sexual binary. Worse still, when he said that he wears a cowboy hat despite not being a cowboy, he implies that boys who wear skirts are not actually girls. He inadvertently face-planted onto the concrete truth.

On a recent Saturday morning, about two dozen small children and their parents gathered in the Park Slope branch of the Brooklyn Public Library for a new reading series…. The event was hosted by Michelle Tea, a writer from Los Angeles, who started attending library story hours after becoming a mom. She’d brought her partner, Dashiell Lippman, and their two-year-old son, Atticus…. “He is pretty butch—we call him Fratticus,” Tea said. “I’m always pushing a tutu on him, but he’s, like, ‘No.’”

Tea’s solution, called Drag Queen Story Hour, introduces elements of gender bending and camp. “I have long thought that drag queens need to be the performers at children’s parties, rather than magicians or clowns,” she said. “Drag has become more mainstream. Kids might have seen one on a billboard or on TV.”

At eleven o’clock, Tea made her way to the front of the room. “Do you all know what a drag queen is?” she asked the children. “Drag queens are amazing. They get to do fun things like dance and sing and travel and play dress-up with their drag-queen friends. And they’re all feminists.” The parents chuckled politely.

The drag queen Lil Miss Hot Mess came out, wearing a white sequinned tunic dress and matching heels, bright-pink tights, and a curly auburn wig…. She [sic] put on black owlish reading glasses, sat on a folding chair, and addressed her [sic] audience: “Can everyone say, ‘When I grow up, I want to be a drag queen’?”

This is not my first unpleasant virtual encounter with Tea and her lesbian partner Dashiell. I wrote about them last fall in Salvo Magazine:

In a buzzy Buzzfeed video, two gender-nonconforming lesbians, Dashiell and Michelle, discuss their efforts to raise their toddler son Atticus to be free of the constraints of gender. Mom Michelle, who became pregnant via a sperm donor, has concluded that gender “ultimately doesn’t mean anything.” Michelle tries to “queer” her “relationship with” 17-month-old Atticus, which includes attempting to “get him to a wear tutu.” Michelle admits Atticus “hates it.” Atticus calls Dashiell, the “gender-queer” parent, “Baba,” which Michelle explains is a name that “more masculine female people and even some transmen [i.e., women pretending to be men] who are parents are going by.”

Michelle frets that Atticus has a book with pictures of girls and boys identified as girls and boys. While reading it, she replaces the offending nouns, explaining, “I’m like ‘child, child.’” Michelle explains why she bowdlerizes the text: “This is where he’s learning what things are, and…I hate the idea that he’s getting imprinted on him, the idea that people who look like this are boys and people who look like that are girls…. Sometimes the best thing to do is to be constantly challenging, and sometimes it’s…just to ignore gender completely.” Michelle expresses relief that because Atticus is being raised by gender-non-conforming, masculine-looking Dashiell, he will learn about the “reality of what gender is or isn’t.”

Mom Sarah Ortiz thought the spectacle was “great” because “there was so much energy,” and mom Kesa Huey said, “It’s what I’m looking for in all of our outings is to present different ways of being in the world and make that fun and available to my kid.”

Who needs discernment when you’ve got energy and fun.

Librarian Kat Savage believes Drag Queen Story Hour, which the library hopes to export to other branches, is “fantastic, because it addresses all these issues of genderfluidity and self-acceptance and all of these topics that are, um, real, are very, very real.”

This cancer has already metastasized to Chicago. The ironically named feminist bookstore in Andersonville, Women & Children First, has hosted two Drag Queen Story Times for toddlers: one last December during which “Chicago’s greatest Queens”—including the obscenely named  Muffy Fishbasket—read Christmas stories, and one this past February when they read love stories in honor of Valentine’s Day.

Don’t worry, it’s not too late. You can catch one of their toddler-exploiting events at several Chicago Public Library branches, Navy Pier, or  the Center on Halsted (an “LGBTQ” organization that has received millions of dollars from our bankrupt state).

At the conclusion of the video, AP reporter Ted Schaffrey makes an embarrassing attempt to redeem the irredeemable by painting the tawdry propagandistic event with a patina of pedagogy, pronouncing solemnly, “Engaging young hearts and minds through sights and sounds.”

I would change “engaging” to “manipulating.”