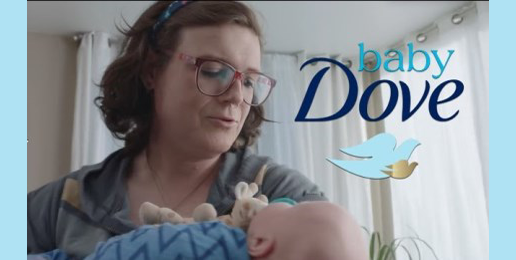 Dove has just released a sad and repellent ad promoting its new product line: Baby Dove. The ad features young women sharing their views of mothering, most of which amount to self-indulgent, self-referential navel-gazing. And then there’s the fabulous Token ‘o’ the Day, a cross-dressing father trying to pass as a mother who tells us that when it comes to mothering “There’s no one right way to do it all.”

The ad begins with the ironic words, “Moms are redefining what it means to be a ‘good mom.’”

We hear first from Elise, a break-dancing mother of a toddler girl who says, “I live to be the best version of myself that I can be, and part of that is being her mom, but I live to dance.”

Single mom Seung, a tech manager, shares that she is raising her son on her own: “I’m happy where I am….I get to make my parenting decisions on my own.”

Dove evidently wants to promote the idea that the autonomous self is the center of the mothering universe. Consulting no one but oneself makes the best mothers. Whatever happened to the Leftist notion that it takes an entire village to raise a child?

We hear from Jackie-the-Climber who extols the critical role climbing rocks plays in her life: “I don’t think I could be the mom that I wanna be without climbing in my life. It keeps me who I am and allows me to be a really good mom to Anna.”

Believing that beloved hobbies make us who we are epitomizes the idolatry of the current age in which people have “exchanged the truth about God for a lie and worshiped and served the creature rather than the Creator.” We now worship and serve the hobbies of our creaturely selves.

And then there’s the crowning glory of the self-worshiping “mothers”: the male grad student “Shea.” With the hubris of science-deniers everywhere, giggling “Shea” proclaims that he and his wife—who is actually a woman—are both “moms” of their newborn son.

This cross-dressing young father who rejects his sex has in effect abandoned his son. While looking inward to his own narcissistic and disordered desires, “Shea” ignores both the needs and future desires of his son who will long for a father who rejoices in his role as a father. His son will long for a father who isn’t a public spectacle. And his son will need a father to be a role model for him, to show him the way to become a man and to teach him to love his own maleness. “Shea” will instead teach his son to be ashamed of and guilty about his own natural and proper feelings of sorrow for his missing father.

One young woman encourages mothers to “Believe in yourself. Believe in yourself as a woman.” Ordinarily, this would suggest the platitudinous idea that young mothers should have confidence in their capacity to be mothers, which can be a daunting task for first-time moms. In the context, however, of “Shea’s” delusional belief that he can be a woman and a mother, it suggests the absurd idea that belief can alter reality.

If society accepts the delusional, irrational, absurd idea that men can become women and mothers, then the modern understanding of a world that actually exists is over—well, at least for a time.

And if a small group of delusional people and their disciples are able to force society to pretend that men can become women and mothers or vice versa, if they are able to force citizens to participate in this fiction by forcing them to use opposite-sex pronouns when referring to gender-dysphoric persons, we will no longer live in a free society but under tyranny.

The message of the ad is that good mothers are those who fully embrace their own selfish desires and their own internal sense of right, wrong, and reality. Maybe no man is an island but in Dove’s view, a good mother is.

The ad concludes with these audacious and ironic words: “To #RealMoms everywhere.”

We need your support!