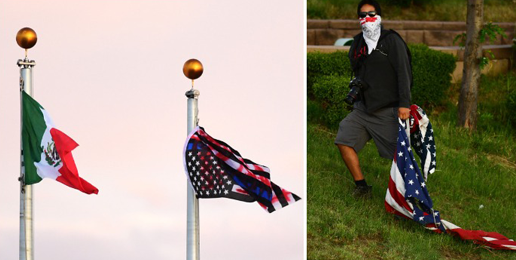 On Friday July 12, pro-illegal immigration supporters protesting outside a U.S. Immigration and Customs Enforcement (ICE) facility pulled down the American flag and replaced it with the Mexican flag. Throughout America’s history, our flag has flown as a symbol of our foundational guiding principles. The American flag—like the flags of every country in the world—stands for its principles—not its flaws. There exists no flawless nation, state, or city because there exist no flawless humans. But there are countries whose guiding principles are nobler than others—countries in which liberty, equality, and justice are more passionately pursued and protected than in others. The United States stands at the pinnacle of such nations.

If national flags did represent a country’s flaws and failures rather than its guiding principles, surely the Mexican flag would stand for egregious institutional corruption and incompetence, making it inexplicable why anyone would replace the American flag with the Mexican flag.

Alternatively, if Mexico is superior to America in most ways, why aren’t Central American emigrants staying in Mexico?

It’s clear that the surge of immigrants applying for asylum are not really asylum-seekers. As a result of their own governments’ incompetence and corruption, impoverished Central Americans are coming to America for the prosperity immigrants throughout our history have seen and sought. They see and seek what Colin Kaepernick and Megan Rapinoe cannot see. They desperately desire entrance into the country Kaepernick and Rapinoe detest.

But they are abusing America’s generosity and exploiting the cheap political gamesmanship of conscience-less and incompetent congressmen and congresswomen in both parties whose deliberate inaction has created the conditions on the border that Leftists now blame on the Trump Administration.

The political Left’s sickening exploitation of the huddled masses beggars belief. Cultural regressives encourage hordes of suffering people to flood our border knowing full well the detention facilities cannot accommodate such numbers, and then Leftists use images and descriptions of these overwhelmed facilities to whip Americans into a frenzy of rage directed at ICE agents and Republicans.

No one better typifies the dishonest exploitation of immigrants than Alexandria Ocasio-Cortez (AOC) who in a congressional hearing tried to smear former acting ICE director Tom Homan by accusing him of heartlessly separating children from their parents—a practice started by the Obama Administration and ended by the Trump Administration in June 2018.

In response to AOC’s accusations, Homan responded that anyone who is arrested for committing a crime is separated from his or her children and that crossing the border anywhere except for ports of entry is a crime.

Later in a tweet AOC responded that “the [Trump] admin has practically closed ports to asylees” resulting in migrant “desperation” that leads them to do dangerous things like “what Oscar & Valeria (the father and daughter who drowned) did.”

Very cunning and morally repugnant tactical moves on AOC’s part. First, she encourages masses of migrants to flood our borders, thereby overwhelming detention facilities and resulting in far less than ideal conditions for detained immigrants. Then when the administration places restrictions on ports of entry—which would improve conditions in detention facilities—she criticizes the administration for its efforts and accuses it of causing the deaths of a father and daughter.

AOC’s ignorance and malfeasance was surpassed by that of U.S. Representative Jesus Garcia (D-Chicago), who, in an explosive hearing in the U.S. House of Representatives accused Homan of not caring about migrant children because they aren’t white.

Justifiably outraged, Homan responded in a riveting defense of himself and the U.S. Customs and Border Patrol in which he also pointed out the ethical implications of the failure to secure the border and identified the group responsible for the border debacle: Congress.

AOC and her allies—who assume no responsibility for the desperation migrants feel or for the detention facilities conditions—are committed to keeping the number of suffering illegals high in order to secure political power.

Ironically, cultural regressives like AOC in government, in the press, and in the streets who so passionately support illegal immigration benefit from the fertile anti-America soil in which so many young Americans have been grown like weeds: that is, government schools. And this anti-America indoctrination starts long before college.

Public schools, long-controlled by Leftists and Leftist organizations, are seed beds of hatred for America and have churned out America-hating, self-identifying “social justice warriors” who mete out injustice to all those who refuse to submit to their ideology.

Government schools advance “progressive” views of America under the banner of “teaching for social justice,” which shares some of the philosophical features of “Critical Pedagogy,” “Critical Race Theory,” and, within theological circles, “Black Liberation Theology.”

Social justice theory encourages people to view the world through the divisive lens of identity politics that demarcates groups according to which groups allegedly constitute the “oppressors” and which the “oppressed.” Those who are identified as the “oppressors” need not have committed any acts of actual persecution or oppression, nor feel any sense of superiority toward or dislike of the supposed “oppressed” class. The theory promotes the arguable idea that “institutional racism” and “systemic bias” as opposed to actual acts of mistreatment of individuals by other individuals, is the cause of differing lots in life.

Social justice grievance theory hyper-focuses on America’s mistakes and failings, while diminishing or ignoring the remarkable success America has achieved in integrating virtually every ethnic and racial group in the world and in enabling people to improve their lots in life through economic opportunity and American principles of liberty and equality.

The ideological echo chamber that government schools are and foster is reflected in these words from Megan Rapinoe when asked about going to Washington D.C.:

We’ve always been interested in going to Washington…. So, yes to AOC, yes to Nancy Pelosi, yes to the bipartisan Congress, yes to Chuck Schumer, yes to anyone else… who… believes in the same things we believe in.

Perfect encapsulation of “progressivism’s” view of diversity and tolerance.

American stands for freedom, equality before the law, and justice. While it is profoundly good and noble to choose to tend to the needs of those less fortunate, which Americans—especially Christians—are known around the globe for doing generously, it is unjust of the government to compel Americans to pay, and pay, and pay for those who break our laws. America’s commitment to justice is inseparable from its commitment to law-keeping. If every citizen is permitted to decide which laws must be obeyed and which may be disobeyed, we are no longer a just country and perhaps not even a sovereign nation much longer.