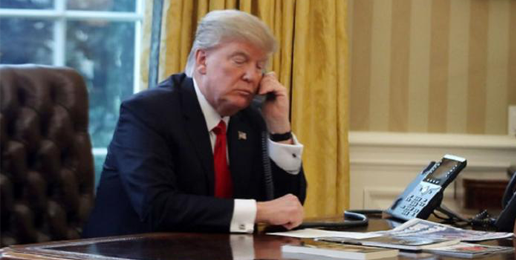 Having worked for a member of Congress in Washington, D.C., and for state legislators here in Illinois, I can vouch for the fact that most elected officials care about what you think. No, really, they do. Even when they go against what is the clear majority opinion, they at least are aware of the potential consequences of their actions.

While they often do things we’d rather they not do, if a large number of their constituents voice a particular opinion on an issue, office holders ignore it at their own peril and are more likely to take the right action.

Those you elect need to regularly hear from you via letter, email, or phone call. And when obvious pressure is being put on them by interest groups to go against the will of the people, they especially need to hear from you. It doesn’t matter if they’re a lowly state representative or the leader of the free world.

1. So-called “transgendered” individuals should not be allowed to serve in the U.S. military.

2. Chai Feldblum, who believes that the LGBT agenda is more important than our God-given and constitutionally protected religious liberty, should not be re-nominated to serve on the Equal Employment Opportunity Commission.

3. Planned Parenthood should be defunded immediately.

Regarding #1, federal courts are attempting to block the president from fulfilling his constitutional duty of being the Commander in Chief of our nation’s armed forces. President Trump is within his power to ignore the court, since the judicial branch has not been granted authority over how the military is to be run. Unfortunately, Trump has chosen to allow the matter to proceed through the courts.

Because of that, openly “transgendered” people (men pretending to be women, or women pretending to be men) are enlisting. President Trump needs to hear from the pro-family community today. The military does not exist for social policy experimentation. And those suffering from gender dysphoria, a recognized mental illness, should not be allowed to serve. (Read more HERE.)

News reports are that President Trump has renominated Chai Feldblum, #2 on our list above, to serve another five-year term as a commissioner on the EEOC. This is not a small mistake by the president, and he needs to hear from you and be encouraged to withdraw the nomination immediately.

The Daily Caller has reported that Feldblum has “regularly advocated for the supremacy of LGBT rights over religious liberty,” and has endorsed polygamy and defended infringing religious liberty to advance the LGBT agenda.

Feldblum’s extremist views have been thoroughly demonstrated over many years, even to the extent of stating that she was “not sure whether marriage is a normatively good institution.” (Read more HERE.)

Regarding #3, when Republicans took the reins of both the U.S. Congress and the White House last year, Planned Parenthood, the nation’s leading killer of unborn babies, should have stopped receiving federal dollars to carry on its evil business. Instead, in one of the GOP’s biggest failures so far during the Trump years, approximately $500 million of the hard-earned tax dollars of Americans continues to fund Planned Parenthood’s abortion mills. (Read more HERE.)

One old expression in politics is that in order for some politicians to see the light, they have to feel the heat. Pro-family conservatives need to regularly turn up the temperature on their elected officials, and this includes the person working out of the Oval Office.

Take ACTION:  Click HERE to send an email to the Trump administration or call the White House comment line at (202) 456-1111 and politely but firmly express your view that President Donald Trump 1) should not allow “trans”-identifying people to serve in the military, 2) should withdraw the nomination of Chai Feldblum, who is so far out of the mainstream that she should not be serving at the EEOC, and that 3) should lead the charge to defund the organization responsible for the largest number of deaths every year in America: Planned Parenthood. They should not receive another dollar from taxpayers.