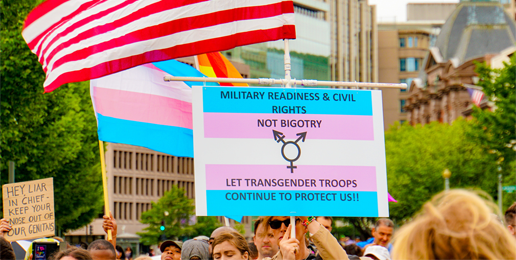 A coalition of Christian leaders, including the Illinois Family Institute’s Dave Smith, has sent a letter to President Donald Trump calling on him to move forward with his plans to revoke President Barack Obama’s policies regarding “transgenders” in the military. An article at The Center for Military Readiness (CMR) explains why the letter is necessary:

In recent weeks, two federal district judges exceeded their authority by ordering the Trump Administration to continue enforcing President Barack Obama’s policies regarding transgenders in the military. They did this even though President Donald J. Trump has initiated formal procedures to review and revoke those policies.

The administration can and should defend presidential prerogatives and sound policies to strengthen our military, but the problem requires immediate attention at the administration’s highest levels.  It would be dangerous to sacrifice the President’s constitutional military powers, and to disregard Supreme Court precedents while allowing judges to make military policy.

The Illinois Family Institute reached out to an attorney specializing in constitutional law to explain why federal district judges think they have the authority to make military policy. The attorney’s response was simple: Those judges are merely giving us another demonstration of lawlessness that we have been witnessing at high levels in our government.

Since it is an obvious overreach by those judges, the Trump Administration should just ignore the rulings. Instead, the administration has appealed the rulings to the D.C. Circuit Court.

In its article titled “‘Supreme Judicial Commanders'” Should Not Run Our Military,” CMR expands further:

President Trump has the right, and the responsibility, to resist these activist court rulings and more that may be handed down in the coming months.

The Commander-in-Chief also has the right, and the responsibility, to restore sound Defense Department policies that were in place long before President Obama took office.

The U.S. Constitution does not grant to any federal judge powers to make policy for the military. (See Article 1, Section 8, and Article II, Section 2.)  The judges’ bizarre rulings favoring transgender plaintiffs were issued without any constitutional authorization, and they are a direct affront to the authority of the Commander-in-Chief.

If the Trump administration fails to act, the result would “shift control of our military to unaccountable, activist judges.” This would, in turn, do the following:

…convey the devastating message that the administration does not have the political will to do what President Trump promised the voters he would do — end political correctness in the military.

The coalition letter explains why President Trump should resist the courts:

At a time when there is widespread concern over the decline of military readiness in the U.S. armed forces, our military has become involved in an extravagant and novel social program involving individuals who will be unable to serve effectively for extended periods of time due to their need for medical and psychological care.

There is no evidence to suggest that the DOD adequately addressed the impact President Obama’s policy experiment would have on military readiness given the costs and physical effects of gender transition. Additionally, no consideration was given to the conscience and religious rights of military personnel who may be required to share close quarters, including showers, with individuals of the opposite sex. Nor were the conscience and religious rights of military personnel addressed for those who may have objections to providing transgender health services, such as hormone therapy, gender reassignment surgery, or counseling.

The letter goes on to say, “The focus of military training should be combat effectiveness, not social engineering…. This will ensure our military focuses on its mission of fighting and winning wars, not experimenting with our troops’ social lives” (emphasis added).

Take ACTION:  Click HERE to send a message to President Donald Trump to encourage him to continue to focus on military readiness and the well-being of our military by reversing President Obama’s harmful transgender policy.

You can also call the White House comment line at (202) 456-1111 to leave a voice message for the administration.