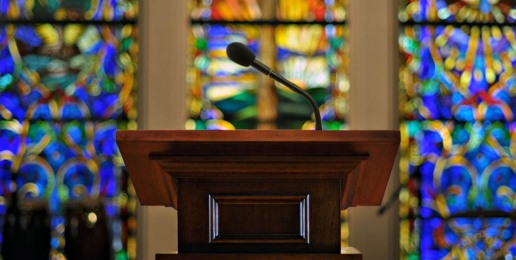 Some of our best voices in the nation are being silenced when it comes to discussing the critical issues facing the country. It just so happens that every Sunday you can hear one of these voices speaking from the pulpit about salvation and the Bible and Jesus Christ. Unfortunately, too often those preachers fear wading onto ground that is deemed “political.”

Here’s the problem, though. These days almost everything is being made into a political issue – and that’s being done on purpose by those that wish to see an ever-growing government and an ever-shrinking private sector. When everything is politics, then issues like life, marriage, adoption, euthanasia (the list goes on and on) become off limits for discussion inside the church.

It wasn’t always this way in America. From the founding of the country, the “Black Robed Regiment” set the standard for Christian men and women to speak forcefully about the issues of the day.

Then in 1954, the IRS code was amended by then U.S. Senator Lyndon Baines Johnson (D-TX) to silence his opponents during his reelection campaign.  The “Johnson Amendment” — as it is known — “absolutely prohibits” 501(c)(3) tax-exempt groups from “directly or indirectly participating in, or intervening in, any political campaign on behalf of (or in opposition to) any candidate for elective public office” or making “contributions to political campaign funds or public statements of position.”

During the decades since, that Johnson Amendment has been used to intimidate pastors from discussing any moral issue that has now become “political.” For fear of losing their non-profit status, church leaders choose to vacate the public square when it comes to key matters of right and wrong. We have seen the consequences of that silence in our culture over the course of these many decades.

In recent months there has been serious public discussion about repealing the “Johnson Amendment,” and initial steps are already being taken with the introduction of legislation to “amend” the amendment. This bill, introduced by U.S. House of Representatives Majority Whip Steve Scalise (R-LA) and Jody Hice (R-GA), is called the Free Speech Fairness Act (H.R. 6195).

So many moral issues in the political arena must be addressed by church leaders inside the church – and not just by Christians outside the church. We must reclaim our God-given First Amendment right of free speech. It doesn’t just belong to those on one side of the debate.

Take ACTION:  Click HERE to send a message to your U.S. Representative to ask him/her to support or even co-sponsor this legislation. Speak up for free speech by telling them you want the Johnson Amendment repealed. Tell them they can start the process by cosponsoring H.R. 6195, the Free Speech Fairness Act.