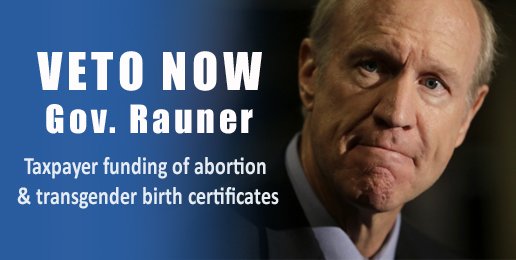 Two important pieces of legislation are awaiting Governor Bruce Rauner‘s action — to sign, or to veto — and both bills should be vetoed!

This legislation would allow gender-dysphoric persons to falsify their birth certificates, which are both legal and historical documents. This will have consequences with regard to the relentless cultural assault on physical privacy through the sexual integration of previously sex-segregated spaces.

When IFI’s Laurie Higgins wrote about this bill earlier this year, her title said it all: “Corrupt, Nonsensical Legislation Reintroduced.” If you haven’t read it yet, we highly recommend that you do.

Governor Rauner must act to veto this nonsense by August 28, 2017 or it will automatically become law.

Secondly: We need pro-life advocates to continue to speak out against HB 40, a bill that would remove all restrictions on taxpayer funding of abortion.  This bill has passed both the Illinois House by a vote of 62-55 and in the Illinois Senate by a vote of 33-22.  A procedural motion has delayed it from being sent to the Governor’s desk, which gives us more time to speak out against it.

One of the many fake news narratives that Leftist love to promote is the phony “war on women.” With sixty million abortions since Roe v. Wade’s passage, one could easily make the case that we have seen a forty-plus-year real war on the preborn.

On July 4th, Governor Rauner vetoed a tax increase; he can and should veto HB 40 and HB 1785 as well.

Take ACTION:  Click Here to send an email or a fax to Governor Rauner’s office to urge him to veto both HB 1785 and HB 40.  Ask him to reject transgender birth certificates and taxpayer funding for abortion.

No to taxpayer funding of abortion, and corrupt, nonsensical legislation for falsifying a legal document.