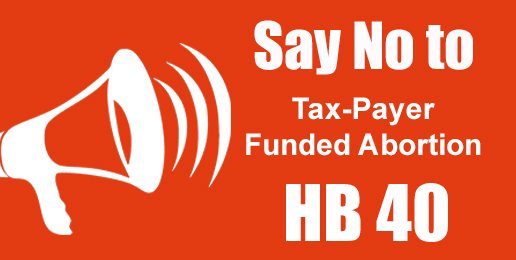 The General Assembly may have adjourned for the summer, but the legislative process is far from finished.  HB 40, which forces taxpayers to pay for Medicaid abortions, must be stopped at the governor’s desk. So, once again, we call your attention to this important issue.

As you may remember, the Illinois Senate passed HB 40 on May 10th by a vote of 33-22, and on that very same day, Illinois Senator Don Harmon (D-Chicago) — who voted in favor of this anti-baby bill — filed a “motion to reconsider.” This is a procedural action that delays the bill from being sent to the governor’s office for his consideration.  There is no time restrictions on his motion. He can sit on it as long as he desires.

On its website, the ACLU of Illinois claims that this procedure “will allow the governor more time to carefully consider the bill and hopefully to reconsider his position.” In other words, pro-abortion activists and their Leftist allies are ramping up the pressure on Gov. Rauner in hopes that he will cave into their pressure and allow the bill to become law.

Responsible pro-life citizens of the state must also keep the pressure on Governor Rauner as the bill eventually moves to his desk.  We cannot remain silent during this time, and allow left-wing abortion activists to drown us out.

Additional problems with this bill:

HB 40 adds abortion coverage to state employees’ insurance plans which, as taxpayers, you will also pay for.

HB 40 is a spending bill that expands entitlements. Illinois owes $10 billion in unpaid bills with tens of billions more in unfunded liabilities. Illinois has the lowest credit rating in the nation because we can’t pay our bills.

Thank you for persevering!

And let us not grow weary of doing good,
for in due season we will reap, if we do not give up.
~Galatians 6:9

Sensitive Snollygosters At It Again