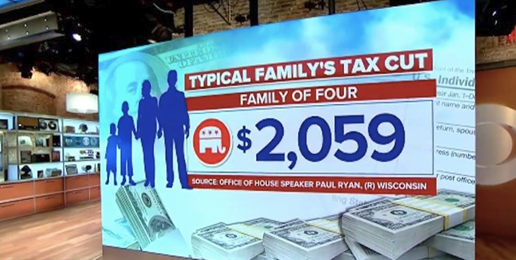 As we stand on the threshold of a new year, a phrase from Simon and Garfunkel’s song “The Boxer” sums up why America’s division into two warring worldviews seems to be widening.

“A man hears what he wants to hear and disregards the rest.”  That’s true for most folks, thanks to human nature.

However, we’re not on an equal playing field.  The whole thing is tilted to the left.  Progressive news and entertainment are everywhere, including airport lounges where thousands of travelers each day are afflicted with CNN’s non-stop propaganda.

If you don’t go out of your way to get some balance, you might think, for instance, that the tax cut bill signed by President Donald Trump does one thing only:  It kicks the middle class and the poor into the gutter, where they’re splashed with dirty, icy water as rich people guzzling Dom Perignon speed by in limos to celebrate at four-star restaurants.

Every day, led by the Washington Post and the New York Times, the media relentlessly portray the Tax Cuts and Jobs Act as a sop to the rich and an attack on the poor and middle class, even though the poor pay no federal taxes and an estimated 80 percent of taxpayers will see immediate cuts in 2018.

The long overdue reform to reduce one of the world’s highest corporate tax rates from 35 percent to 21 percent will free up capital to expand industries, create more jobs and to compete internationally.   And eliminating the Obamacare penalty tax as of January 1, 2019, is a major step toward repealing and replacing the Affordable Care Act in piecemeal fashion.

Here are some other highlights of the new law from the Tax Foundation:

—Retains the charitable contribution deduction, and limits the mortgage interest deduction to the first $750,000 in principal value.

—Limits the state and local tax deduction to a combined $10,000 for income, sales, and property taxes. (This will affect people the most in high-tax states run by Democrats.  More on that later).  Taxes paid or accrued in carrying on a trade or business are not limited.

—Raises the exemption on the alternative minimum tax from $86,200 to $109,400 for married filers, and increases the phase-out threshold to $1 million.

You don’t hear much about these provisions because they don’t fit the media narrative.  Instead, we get a steady diet of class warfare.

USA Today, for instance, analyzed “5 household situations” as to how the tax bill would affect them. One of them, as related by the Wall Street Journal’s Kimberley Strassel, “included a childless single renter earning $1 million a year, paying $50,000 in state and local taxes, and claiming $40,000 in charitable deductions.” As Ms. Strassel notes, “this downtrodden soul would pay $1,887 more in taxes.” Oh, the horror.

Some media outlets are floating the theory that the new tax law is so unfair that Democrats now have a good chance to take back the U.S House and perhaps even the U.S. Senate this November despite the roaring economy.

Before they book too many dance floors, though, Democrats might be reminded that Alabama’s recent election of a Democratic senator was a unique case, and that they’re defending 25 U.S. Senate seats, including several in “red” states — Indiana, North Dakota, West Virginia, Missouri and Montana – that Mr. Trump carried by 19 percent or more. Republicans have to defend only eight U.S. Senate seats.

Perhaps the Dems’ hope lies in a mass migration from high-tax, “blue” states whose residents will no longer be able to deduct all state and local taxes on their federal returns. Formerly rock-solid conservative New Hampshire recently went purple, as thousands of liberals from Massachusetts moved north to escape the consequences of their own party’s policies.  One would have hoped that they would think twice about fouling their new nest, but, no.  They’re trying their darndest to turn the Granite State into a replica of their former state or socialist Vermont.

Up in that neck of the woods, the Boston Globe and its former owner, the New York Times, are liberals’ version of the Bible.  Plus National Public Radio and PBS.  So it’s not surprising that even the many folks there who will benefit from the new tax law consider themselves victims.

A little retooling of the first referenced phrase might be in order:  “The media tell you what they want you to hear, and disregard the rest.”