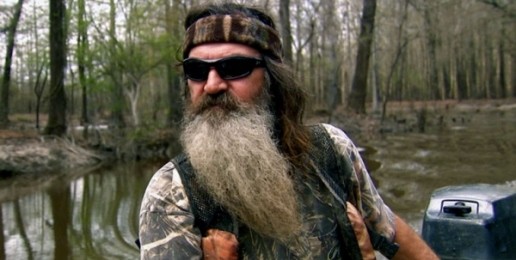 Duck Dynasty’s raggedy, curmudgeonly Phil Robertson has displayed a moral courage and boldness that should shame many (perhaps most) religious leaders in this country. And in so doing, he has won a huge victory for truth, religious liberty, and diversity. A&E has rescinded their arrogant, ignorant, and narrow-minded suspension of the family patriarch, Phil Robertson.

This prudery is remarkable from the crowd that worships at the altar of sexual deviance during annual public celebrations of homosexuality and cross-dressing and on many a family hour sitcom. Where were these paragons of linguistic virtue when a beloved homosexual character on Modern Family made a joke about “Sondheimizing” children?

I wonder if “progressives” got their undies in a twist over the title of the GQ Magazine interview that started this whole controversy: “What the Duck?” Oh, those clever wordsmiths at GQ.

Surely, this quote about the Louisiana backwater from the author of the GQ interview must be tormenting “progressive” language police:

I shouldn’t be sitting around the house and bitc**ng because the new iOS 7 touchscreen icons don’t have any f**king drop shadow. I should be out here, dam**t! Killing things and growing things and bringing dead things home to cook! There is a life out in this wilderness that I am too chickensh*t to lead.

What really bedevils “progressives” is not the use of vulgar language. What really sticks in their craw is the audacity of anyone daring to suggest that the primary sexual act of homosexual men is deviant, perverse, abnormal, immoral, or a pathway to disease.

Another remarkable aspect of this incident is that “progressives” are so profoundly ignorant of theology and yet so unself-conscious about pontificating on matters of which they are so ignorant. Robertson’s main sin—according to the non-judgmental crowd—was his affirmation of the historical position of the church that homosexual acts are among the many sins that afflict humans. “Progressives” who know next to nothing about the Bible and exegesis think they’ve got orthodox Christians over a barrel when they—“progressives”—bring up Old Testament verses about eating shellfish or wearing mixed fabric clothing, or when they bring up verses about judging not or the absence of condemnation in Christ. A quick peak around the Internet would clarify the context and meaning of those passages and reveal to these exegetes the flaws in their manipulative use of Scripture.

But neither correct understanding nor obedience to Christ is their goal. Their goal is to compel deference to their self-serving desires by hook or by anti-biblical crook. Corrupting and exploiting Scripture is one of their tactics. The exploitation of the courts and government schools are two other means by which they seek to coerce compliance with their sexual ideology. And ad hominem attacks on any public figure who dares to express moral propositions with which they disagree is yet another.

The movement to normalize homosexuality is a pernicious movement. The end game is the eradication of the belief that homosexual acts are immoral. When that’s not possible, “progressives” seek to make it socially and politically impossible to express it. They will use vicious slander and outright lies (e.g., that homosexuality is analogous to race) to achieve their ends.

And still most churches remain silent, bending over backwards (which is easy for men without chests and spines) to prove that they don’t hate homosexuals. It should be shocking that pastors and priests say nothing while public money is used to affirm sin as righteousness to our little ones in our public schools. It would behoove church leaders who tsk-tsk Phil Robertson’s crude language to spend a little time thinking about their accommodation of the profound evil taking place in our schools. How are they exposing these deeds of darkness? How are they being salt and light? How are they protecting their flocks? Are they teaching the whole counsel of God?

In A&E’s statement, they emphasized that Robertson’s views “are not views we hold.”

So, do they reject Robertson’s belief that only God can judge who’s going to Heaven or Hell?

Do they reject Robertson’s belief that it’s our job as Christians to love our fellow sinners and tell them the good news about Jesus.

Do they reject Robertson’s common knowledge claim that that Nazis, Communists, and Muslims are not followers of Jesus Christ?

Do they reject the belief that “Neither the adulterers, the idolaters, the male prostitutes, the homosexual offenders, the greedy, the drunkards, the slanderers, the swindlers” will inherit the kingdom of God? Well, those were words paraphrased by Robertson, and they’re words that St. Paul wrote to the church in Corinthians shortly before he wrote what is known as the Love Chapter, widely read at all kinds of ceremonial occasions. Do the biblical scholars at A&E reject all of Corinthians or just the inconvenient parts?

Perhaps they don’t hold the view that African Americans are “godly people,” because Robertson said that those he worked side by side with in the cotton fields were godly people.

Most important, Robertson said this in the interview: “If you simply put your faith in Jesus coming down in flesh, through a human being, God becoming flesh living on the earth, dying on the cross for the sins of the world, being buried, and being raised from the dead—yours and mine and everybody else’s problems will be solved.”

Sadly, the powers that be at A&E probably don’t hold this belief.

Duck Dynasty, Gay Activism, and the Clash of 2 Cultures

Duck Dynasty’s Phil Robertson: the Hairy Canary in the Rainbow Coal Mine
b
a
x
r