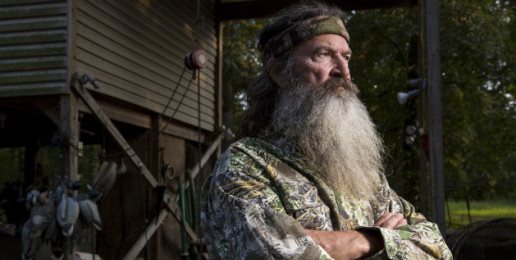 You knew it would happen sooner or later. An outspoken, wildly popular, conservative Christian who doesn’t give a hoot—or in this case, a quack—about political correctness would air his views about homosexuality, and overnight, Hollywood hell would break loose.

To catch you up on the latest events, earlier this week, the text of Phil Robertson’s interview with GQ Magazine was released online, containing controversial comments about homosexual practice, among other things. (For those who have been living under a rock, Phil Robertson is the patriarch of the Duck Dynasty clan, and he is a self-proclaimed “Bible thumper.”)

Shortly after the interview was released, and quite predictably, GLAAD issued a statement condemning Robertson’s remarks as “some of the vilest and most extreme statements uttered against LGBT people in a mainstream publication” and said “his quote was littered with outdated stereotypes and blatant misinformation.” (Reminder: GLAAD officially stands for the Gay and Lesbian Alliance Against Defamation, but I have long suggested that a more appropriate name would be the Gay and Lesbian Alliance Against Disagreement.)

GLAAD spokesperson Wilson Cruz says, “Phil and his family claim to be Christian, but Phil’s lies about an entire community fly in the face of what true Christians believe. He clearly knows nothing about gay people or the majority of Louisianans—and Americans—who support legal recognition for loving and committed gay and lesbian couples. Phil’s decision to push vile and extreme stereotypes is a stain on A&E and his sponsors, who now need to re-examine their ties to someone with such public disdain for LGBT people and families.” (Note to GLAAD: The majority of Louisianans do not support same-sex marriage.)

This was followed by a clarification and apology of sorts by Robertson:

I myself am a product of the ’60s; I centered my life around sex, drugs and rock and roll until I hit rock bottom and accepted Jesus as my Savior. My mission today is to go forth and tell people about why I follow Christ and also what the Bible teaches, and part of that teaching is that women and men are meant to be together.

However, I would never treat anyone with disrespect just because they are different from me. We are all created by the Almighty and, like Him, I love all of humanity. We would all be better off if we loved God and loved each other.

Later the same day, A&E issued its own statement:

We are extremely disappointed to have read Phil Robertson’s comments in GQ, which are based on his own personal beliefs and are not reflected in the series Duck Dynasty. His personal views in no way reflect those of A&E Networks, who have always been strong supporters and champions of the LGBT community. The network has placed Phil under hiatus from filming indefinitely.

In support of Robertson, the Faith Driven Consumer Facebook page started an “I Stand With Phil” campaign, while another Facebook page, “Boycott A&E Until Phil Robertson Is Put Back on Duck Dynasty,” had more than 100,000 “likes” in a matter of hours. Talk about a clash of two cultures!

What did Robertson actually say that was so controversial?

Was he accusing all (or most) gays of engaging in bestiality or of sleeping with multiple women? It appears not, although I can easily see why his critics would think otherwise, and in that context, he was right to clarify his comments.

What he was saying, though, was that gay sex should be seen as part of the “anything goes” mentality of the sexual revolution of the ’60s, and in that regard he was right. In fact, while gay activists emphasize homosexual identity, placing the gay rights movement in the context of the civil rights movement of the ’60s, Robertson and other conservative Christians emphasize homosexual behavior, placing gay activism in the context of the sexual revolution of the same era.

Robertson next quoted from 1 Corinthians 6:9-10, a famous passage in Paul’s letters in which he clearly states that practicing homosexuals, along with practicing heterosexual sinners of various stripes, will not inherit God’s kingdom. (For the record, despite frequent objections to the contrary, the Greek text is quite clear in terms of its overall sense.)

Was A&E genuinely unaware that Phil Robertson held to these views? I seriously doubt it. My guess is that they were just glad (not GLAAD) that he hadn’t aired them publicly.

Finally, Robertson suggested (speaking first for himself) that the female sexual organ was “more desirable” than a man’s rectum and that a woman had “more to offer” a man.

And for these comments he was promptly suspended.

The fact is, though, no matter how much two men may love each other, it remains indisputably clear that men were biologically designed to be with women, and vice versa. In that regard, no matter how crude Robertson’s comments may have been, they were correct.

As for his quotation from 1 Corinthians 6, did anyone really think that Robertson would say, “You know, now that I’ve become a TV celebrity, I’m going to revise my views on God’s intent for human sexuality and marriage”?

Personally, I don’t believe for a moment that Robertson will bow down to A&E and compromise his convictions, although I could see him offering a further clarification of his statements, explaining, for example, that he was not accusing homosexuals of practicing bestiality any more than heterosexuals engage in such perversion.

And I don’t see how A&E can back down from its position regardless of how popular the show is. The gay lobby is far too powerful. (I imagine that Alec Baldwin has an opinion on this as well, although, to be clear, I am not comparing Robertson to Baldwin.)

In fact, I don’t see either of them about to blink, which means the culture wars are about to hit the fan, and this could get very ugly very quickly.

I suggest that those of us who agree fundamentally with Robertson make clear that: 1) We are unashamed of our belief in Jesus and in biblical morality; 2) we stand against the mistreatment of all people, including gays and lesbians; and 3) we will not support the radical redefinition of marriage, regardless of the cost involved, nor do we see cultural capitulation to gay activism as inevitable.

Now would be a perfect time to take a stand, but with grace, precision and wisdom.

This article was originally posted at the Charismannews.com blog.

Duck Dynasty’s Phil Robertson: the Hairy Canary in the Rainbow Coal Mine
b
a
x
r