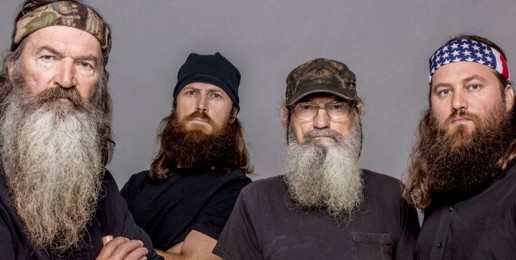 One of the stars of the popular A & E show Duck Dynasty, Phil Robertson, has been indefinitely suspended from the program. His crime was making some politically incorrect statements about homosexuality in a condescension-dripping interview with GQ magazine that rendered the homosexual community apoplectic. Hell hath no fury like homosexual activists who encounter dissent.

Here are some of the offending comments, which he offered in response to GQ’s question, “What, in your mind, is sinful?”:

“Start with homosexual behavior and just morph out from there. Bestiality, sleeping around with this woman and that woman and that woman and those men,” [The writer explained that that Robertson then paraphrased Corinthians]: “Don’t be deceived. Neither the adulterers, the idolaters, the male prostitutes, the homosexual offenders, the greedy, the drunkards, the slanderers, the swindlers—they won’t inherit the kingdom of God. Don’t deceive yourself. It’s not right.”

“We never, ever judge someone on who’s going to heaven, hell. That’s the Almighty’s job. We just love ’em, give ’em the good news about Jesus—whether they’re homosexuals, drunks, terrorists. We let God sort ’em out later.”

Robertson may have answered in his own imitable voice, but much of what he said reflects the mind and will of God as revealed in the word of God.

And here’s how the contemporary founts of biblical exegesis, wisdom, truth, non-judgmentalism, non-condemnation, and tolerance, the Gay & Lesbian Alliance Against Defamation (GLAAD) and the Human Rights Campaign (HRC), responded:

GLAAD: some of the vilest and most extreme statements uttered against LGBT people in a mainstream publication,…his quote was littered with outdated stereotypes and blatant misinformation….Phil and his family claim to be Christian, but Phil’s lies about an entire community fly in the face of what true Christians believe….He clearly knows nothing about gay people or the majority of Louisianans—and Americans—who support legal recognition for loving and committed gay and lesbian couples.

HRC: Phil Robertson’s remarks are not consistent with the values of our faith communities or the scientific findings of leading medical organizations….We know that being gay is not a choice someone makes, and that to suggest otherwise can be incredibly harmful. We also know that Americans of faith follow the Golden Rule—treating others with the respect and dignity you’d wish to be treated with. As a role model on a show that attracts millions of viewers, Phil Robertson has a responsibility to set a positive example for young America—not shame and ridicule them because of who they are.

A red-faced, stomping Rumplestiltskin’s got nothing on homosexual activists who unexpectedly hear truth when they expect obsequious silence.

Just a couple of brief responses to GLAAD’s and HRC’s statements:

There are increasing numbers of Christians who believe our sole task as Christians is to love homosexuals—and by “love,” they mean, just be nice—and that we should never say anything to anger or offend them. These Christians fail to understand that this would certainly require that Christians refrain from ever saying publicly that homosexuality is an abomination in God’s eyes. But it’s not just Old Testament language that is too indelicate for the delicate sensibilities of “progressives” that must be silenced.

It’s any idea about homosexuality with which “progressives” disagree that must be silenced. We can’t say that same-sex attraction is disordered, or that homosexual acts are immoral, or that God did not create men and women to experience same-sex attraction, or that Jesus affirms marriage only as a union of one man and one woman, or that Paul teaches that homosexuals (among others) will not see the kingdom of Heaven. And we certainly can’t point out the indelicate truth that the primary sex act of homosexual men is a pathogenic nightmare that results in countless sexually transmitted infections (including shigellosis) and untold suffering.

The Left is caterwauling about Phil Robertson’s “judging” and “condemning,” all the while, of course, judging and condemning Phil Robertson. Either out of their own ignorance or Macchiavellian political expedience, the Left fails to make the distinction—publicly, at least—between judging the eternal destination of individuals and “judging” which behaviors are right and which are wrong. Everyone judges in that sense. Everyone does it every day. Every time the Left becomes indignant about the beliefs or political actions of conservatives, they have judged. A society that refuses to make judgments about what constitutes moral conduct could not make laws and would not long exist. A society that refuses to “condemn” wrong actions as wrong will collapse in moral anarchy.

What “progressives” condemn is any condemnation directed at any behavior of which they approve. And this is what leads to the hypocrisy virtually everyone can see in their laughable claims to value “diversity,” “tolerance,” free speech, and the First Amendment (which protects the free exercise of religion and says nothing about the free exercise of homo sex).

Ah, but “progressives” cleverly contrive an out for themselves by saying there is no moral imperative to tolerate intolerance or any statements that “harm” others. But notice two things: First, that this statement itself reflects a moral “judgment.” And second, it presumes agreement with the Left’s definition of harm.

I thought the destruction of marriage would be the cultural event that awakened the slumbering Christian masses. Perhaps it will instead be a hoary, hairy, much beloved Louisianan duck call-maker who loves Jesus Christ and fears God more than man.

The halcyon days for Christians in America are over, my friends. Religious liberty is fast-diminishing—well, for orthodox Christians it is, not for fundamentalist Mormons who want multiple wives.

Prepare for persecution, and consider it joy to encounter trials for Christ who suffered the ultimate trial—the one that heaped scorn on him, cost him his life, and saved ours.

Take ACTION:  Click HERE to send an email or fax to the executives at A&E Network, to let them know what you think of their intolerance, religious bigotry, and viewpoint discrimination.

Duck Dynasty, Gay Activism, and the Clash of 2 Cultures
b
a
x
r