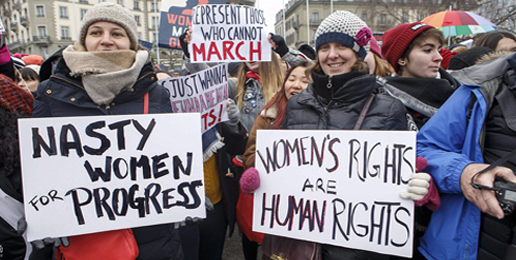 Once upon a time in America, society demanded civility and honored women and motherhood.

But honor seems to have been tossed by the wayside in this modern era and exchanged for a cheap view of the female sex.

What happened to so utterly change the widespread estimation of the “fairer” sex?

First, we must understand that our nation’s mores were built upon a biblical worldview. We read this in Proverbs:

Charm is deceitful and beauty is passing,
But a woman who fears the Lord, she shall be praised. (Proverbs 31:30)

He who finds a wife finds a good thing,
And obtains favor from the Lord. (Proverbs 18:22)

The Founders — many of whom were devout Christians and the rest of whom believed in a Creator and respected biblical Christianity — envisioned a country of free men and women and families devoted to one another, worshipping freely.

During the years when Americans adhered to the original worldview of the first settlers and Founders, individuals were treated with respect. Each person was acknowledged as created by God and thus intrinsically valuable.

But with the twentieth century came some wholly destructive changes.

In 1921, Margaret Sanger founded the American Birth Control League, which became Planned Parenthood in 1942, and ushered in the radical notion that babies in the womb had no intrinsic worth. Their worth was determined by their usefulness to society.

Sanger convinced many women that motherhood was not a blessing and that some people by virtue of their mental abilities or race were not worthy of life. This was a monumental lie based on a Darwinist worldview.

a theory that physical matter is the only or fundamental reality and that all being and processes and phenomena can be explained as manifestations or results of matter.

Sanger’s philosophical beliefs contributed to the erosion of the view of mankind as the height of God’s creation, replacing it with a “utilitarian” viewpoint. Utilitarianism deems people worthy of life based on their capacity to contribute to society.

In the span of twenty years many Americans were persuaded that people were not intrinsically valuable because God created them, but rather, a person’s value was dependent upon their utilitarian value.

Next came Hugh Hefner and Second-wave feminists like Helen Gurley Brown and Gloria Steinem who persuaded men and women that sex apart from marriage and procreation was fine and dandy. Throw off the chains of old thinking and embrace your sexuality!

Helen Gurley Brown convinced several generations of women to engage in sex outside the safety of a loving marriage. Ms. Brown taught young women, enamored of Cosmo and the free love mantras of the day, that the sole goal of sex was orgasm and pleasure.

Counter that with God’s wondrous idea: sexual intimacy was to be the height of oneness between a man and wife, and the means of procreation. Marriage was intended to be a safe place, a refuge, where a loving husband and wife could raise children in the fear and admonition of the Lord.

But indeed, if humans are not wondrously created by a Creator but, instead, are merely biologic units, then sex is no different than any other biological activity.

Hugh Hefner with his slick Playboy magazine indoctrinated decades of men of all ages with the lie that unrestrained sex is a terrific recreational activity and women’s bodies are the intended venue. Playboy perpetuated the view of women as playmates.

If a man believes that women are good for a thrill, like a ride at Six Flags, he is less likely to consider her character and heart important. He becomes concerned only with her body.

Hefner was a proponent of the “if it feels good do it” movement and convinced millions of men to throw off  archaic, puritanical ideas about womanhood and sex.

It was a very short step from nullifying mankind’s intrinsic value to sex with no restraint.

Add to that horrendous mix of immoral indoctrination the radical feminist movement. If Cosmopolitan magazine was the “bible” of free love, sex and orgasm for the single girl, Gloria Steinem was the prophetess of the sexual revolution.

Steinem founded Ms. magazine in 1969, which happily harmonized with Cosmo, further disseminating the dogma of free love and sex without the tedious tether of marriage.

The devotees of Brown and Steinem–who were once college radicals burning bras, protesting the Vietnam War, rebelling against parental authority, and belittling the institution of marriage–are now ensconced in America’s halls of academia teaching malleable young minds.

We now know what happens when you teach a nation that people have no intrinsic value, that women are mere means to pleasure, that women should want unfettered sex whenever and however, and that humans in utero are disposable.

Women in 2017 are beginning to realize that they’ve been sold a rotten to the core bill of goods.

In 2017, America has been forced to reckon with the consequences of almost a century of humanistic, unbiblical, immoral ideology. Free “love” is neither love nor free. It’s hedonism and it’s costly.

Women are objectified. Sexually transmitted diseases proliferate. Unwanted pregnancies terminated by abortion result in, not only murdered babies, but severe depression in women. Men, being denied their rightful duty and purpose to protect women and children, are emasculated and devalued.

How can we turn this around? How can we once again teach the amazing worth of each man and woman, boy and girl?

How can we teach men that women are not playmates to use but, rather, persons created in the image and likeness of God?

America can change only if we as a nation turn to the principles that first made us great: God’s principles.

America can become a safe place once more for women and babies if we teach the transcendent truth that “all men [and women] are created equal and endowed by their Creator with certain unalienable rights, that among these are Life, Liberty and the Pursuit of Happiness.”

Americans can realize the great heritage of our nation if we repent and acknowledge the words of the Psalmist:

Happy are the people whose God is the Lord!

Margaret Sanger and the Racist Roots of Planned Parenthood

Are Progressives Targeting Minorities with Abortion?
b
a
x
r