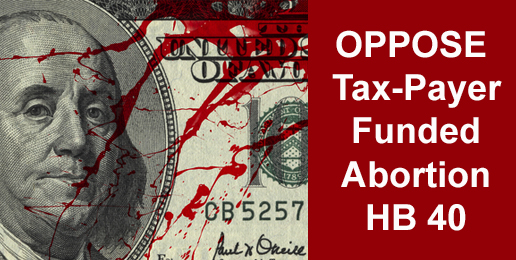 The U.S. abortion rate is the lowest in recorded history! The Guttmacher Institute found that there were 14.6 abortions for every 1,000 women aged 15-44 in 2014. That’s lower than the abortion rate in 1973 (when the Roe v. Wade case was decided) and every year since then.

Republicans in Washington, D.C. are taking steps to defund Planned Parenthood and prevent the use of federal taxdollars for abortions.

Illinois Democrats are going in the opposite direction. State Representative Sara Feigenholtz (D-Chicago) has re-introduced legislation that would remove all prohibitions on taxpayer funding of abortions through HB 40. Here is the Illinois Citizens for Life:

For decades, Illinois has had a public policy of not paying for abortions under the Medicaid assistance program except for life of the mother. Court decisions have added “health” and rape and incest. The Illinois law went to the U.S. Supreme Court in 1979 and was upheld in its entirety in 1980.

Survey after survey has shown that a clear majority of Illinoisans, even those who say they are pro-choice, do not want their tax dollars paying for abortions.

HB 40 would remove this ban and require taxpayer funding of abortions for any reason throughout the full nine months of pregnancy. If this bill passed into law, the thousands of these abortions added [estimated at 15,000 or more each year] would be paid for only with state taxpayer dollars, since the federal government prohibits paying for abortions other than for life, rape and incest.

Pro-life lobbyist Ralph Rivera says that there would be no limit to the number of abortions a woman could have using tax-dollars, and the abortion could be for any reason through all 9 months of the pregnancy. There would also be no age restriction, so minors would be eligible for taxpayer funded abortions.

A large part of the targeted population in HB 40 is those who are covered under Medicaid. The website Illinois Health Matters provides a breakdown on the “Demographics of the Medicaid Population,” noting that “about 600,000 Illinois residents age 19 to 64 with low income became eligible for Medicaid.”

According to Illinois Citizens for Life, the year the Illinois Law was passed that prohibited taxpayer funding, “over 12,000 abortions were paid for under Medicaid with tax dollars.” Since the number of abortions was substantially higher when tax-dollars were used, it should be expected that more abortions will be performed once the restriction is removed. One question that follows is who is going to be having those abortions? Note these numbers:

Since 51 percent of the Medicaid recipients in Illinois are minorities, whether it is intended or not, the passage of HB 40 will increase the number of abortions in the minority community.

[Margaret] Sanger was a nurse and a birth control advocate in the early 20th century. But more importantly, she formed the organization, American Birth Control League, which would eventually become Planned Parenthood.

[She] espoused sinister motives for advancing birth control and abortion: she fully endorsed eugenics for the betterment of race and society.

Margaret Sanger was born in 1879 and died in 1966, so this issue is not new. Today, Sanger is seen as a feminist hero and the Democratic Party supports full funding for Planned Parenthood.

Take ACTION: Click HERE to send a message to your state to ask him/her to vote AGAINST this pro-abortion bill.  Ask them to consider how abortion providers and eugenicists are promoting abortion to destroy the innocent pre-born human lives of black and brown babies.