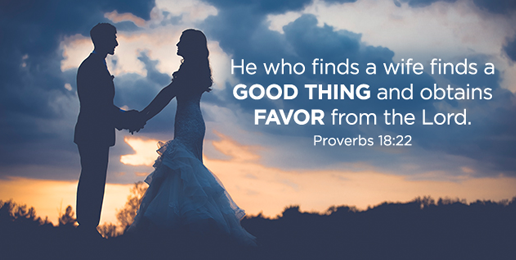 The common reasons given for this trend are that young adults are waiting to marry until they complete their education and gain some financial stability. In the aftermath of the Great Recession, the explanation goes, all of that has been taking longer.

Maybe so. But I can’t help wondering if there are other issues at play as well. With the stigma against premarital sex all but gone, there’s no perceived need for the current generation to get married in order to satisfy their sexual desires. And with the rise of cohabitation, there’s no need for an expensive wedding or longer-term commitment in order to experience some version of life with a partner.

On top of this, we’ve witnessed the decline of a Biblical worldview in our culture for many years. The Bible teaches the inherent goodness of marriage. Is it possible that our rejection of the Bible has contributed to marriage (and starting a family) slipping down the list of priorities in our culture?

Let’s be clear: the Bible doesn’t command—or even recommend—a certain age for marriage. But the continuing trend of delaying marriage strikes me as problematic, and perhaps not a coincidence that it’s happening at the same time that our culture is becoming increasingly secularized.

I understand that education takes time. I also understand that a certain level of financial readiness is wise before marriage. And I also understand that God’s timing is perfect, and sometimes He doesn’t bring the “right one” to us until later than we might have expected. But with all that said, I can’t help but think that the overall trend in our culture toward later marriage is a symptom of a declining Biblical worldview in which marriage and childbearing is losing significance.

With all that in mind—and as a thirty-something millennial who has been happily married for seven and a half years—I’d like to take a few moments to celebrate the blessing of marriage.

The Goodness of Marriage

As I said a moment ago, the Bible teaches the inherent goodness of marriage. Proverbs 18:22 tells us that “He who finds a wife finds what is good . . .”

Marriage was created by God as the final culmination of His work during creation week. I once heard someone point out that God repeatedly observed the goodness of all He had made—until He was nearly finished with His work. Then, seeing Adam alone, He said “It is not good . . .” Just when God seemed to be at the very pinnacle of His efforts—the creation of man—He says that something isn’t good. Remarkable! If that doesn’t give us a glimpse of the ultimate and fundamental goodness of marriage, nothing will.

Turning back to Proverbs, we find God (through Solomon) instructing men to “rejoice with the wife of your youth.” Marriage was designed by God to be a source of joy, fulfillment, and blessing. The long-persistent popular culture representation of marriage as a sure way to misery isn’t meant to be true.

Besides the fact that a godly marriage is a blessing to both husband and wife, the Bible teaches multiple purposes for marriage. Let’s take a look at them.

Companionship: As we noted earlier, God Himself said it’s not good for man to be alone. While companionship undoubtedly wasn’t the only factor God was thinking about, I’m sure it was on His mind. “Two are better than one,” the Bible tells us in Ecclesiastes 4:9. Having someone to share life with is far more satisfying and emotionally fulfilling than being alone.

Godly Children: Marriage is also intended to produce another generation of godly children. This is stated clearly and forcefully in Malachi 2:15 where we’re told that the purpose of marriage is to produce godly offspring. It’s simple, but true: of the three institutions God created (family, government, and church) only the family has the capability of creating new little people. Pretty amazing, right? Of course, along with that power of creation comes the responsibility to teach and train.

Antidote for Temptation: Paul suggests in 1 Corinthians 7:9 that part of the reason for marriage is to avoid sexual temptation. This brings up an interesting point worth considering. As we noted at the start of this article, the average age for first marriage in the U.S. has been increasing. Yet over time, the average age for puberty has been decreasing. Put these trends together and young people are now facing sexual pressures—without the legitimate outlet of marriage—for far longer than in the past. That’s not an excuse for moral failure or lack of personal responsibility, but it’s still true that God gave us marriage as a natural, appropriate, and righteous outlet for the sexual appetites He also gave us. Unfortunately, the current trends of our culture put our young people in a more susceptible position for a much longer period of time compared to just a few generations ago.

The truth is, marriage is the only valid context for men and women to experience the pleasure and physical release of sexual intimacy. God created us as physical beings, and as such, we have physical appetites that we can choose to either legitimately fulfill or sinfully abuse. The good news is that God gave us a wonderful gift in marriage that allows us to experience the joy of intimacy in a context He not only approves but that He created.

An Illustration of Christ and the Church: Lastly, marriage is a picture of Christ and the church. When a husband and wife are living in harmony and unity as God intends, their relationship is a living illustration of the love, self-sacrifice, and submission that exists between Christ and His bride. We’re not perfect and will never be a perfect picture, but it’s an ideal to pursue as we seek to honor God through our marriages.

As I said earlier, I’m a thirty-something millennial who has been happily married for seven and a half years. My wife has been an incredible blessing to me and I can’t imagine my life without her (and I hope I don’t flatter myself too much to say that the reverse is true as well!).

In an age when marriage is being delayed, avoided, and dishonored, I’d like to stand up and be counted among those who say that marriage is emphatically wonderful. And to all you twenty-somethings out there wondering if it’s really worth it, I say simply yes, it is. Absolutely yes.