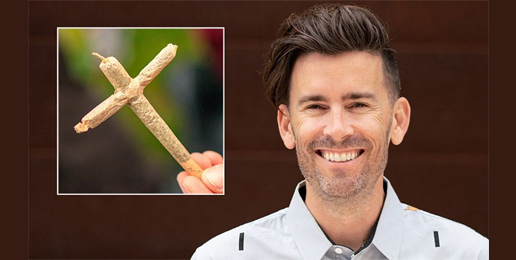 Into the Weeds: 3 Questions Christians Should Be Asking the New Pot Pastor
Written By Terrell Clemmons   |   05.15.19
PRINT

Live from last month’s Coachella Valley Music Festival, on April 20, one day before Easter, Craig Gross went public about his new web-based venture. Marijuana laws are loosening nationwide, and he’s launching ChristianCannibas.com to get the church talking about it. He wants the conversation to be larger than matters of legality or distinctions between medicinal vs. recreational use. Mainly, he wants to tell people about the benefits he’s personally experienced since it came into his life.

Like XXXchurch, Christian Cannabis defies simplistic categorization. Gross’s introduction to marijuana traces back to a difficult season following the death of his father, health issues for Jeannette, and a spate of migraines for which doctors could find no physiological cause. One night, he was up watching CNN, when Dr. Sanjay Gupta’s documentary Weed came on. It followed the story of Charlotte, a little girl who’d been suffering debilitating seizures until her mother secured for her a specialized marijuana strain that resulted in near total relief. The specific concoction, high in CBD (cannabidiol – one extract from the plant) and low in THC (tetrahydrocannabinol – the psychoactive constituent of it), has since been named Charlotte’s Web.

The next day, Gross applied for and received his medical marijuana card for $70 and a Skype interview with a doctor. A nonsmoker, he experimented with different methods of ingestion until he landed on a brand of cannabis-infused mint that he thought was perfect for him. It looked and tasted like an Altoid and contained a 5mg “microdose” of THC.

It helps calm his mind so he can pray, he says, and it’s made him a better dad and husband. His ministries and business ventures are going great, and his health is better in all ways, especially spiritually. He raises his hands in worship, which he never did before, “’cause I was raised Baptist.” “Call me crazy, but that little green cross pointed my eyes toward the real Cross,” he says, referring to the green cross on the MED-a-mints cannister.

Gross says Christians should get ahead of, rather than lag behind, the cannabis conversation, and I tend to agree. Here are three questions to frame the discussion:

1.) What is the problem for which marijuana is being put forth as the solution? While Charlotte had been diagnosed with Dravet Syndrome, a rare form of drug-resistant epilepsy, Gross had headaches of no medically discernible origin, along with other symptoms of an admittedly frenzied life. Some cannabis-based pharmaceuticals have been available for years as treatments for medically diagnosable conditions, but Gross effectively medicalizes the difficulties of living in a fallen world and then applies pot as the way to deal with them.

2.) What risks are involved in using marijuana to address this problem? Marijuana is a known mind-impairing, performance-degrading drug, but Gross glosses over this fact as if his own pastoral inclinations have ceased to function. Marijuana Debunked (2015), by addiction psychiatrist Ed Gogek, MD, gives a foreboding overview of this and other risks to societies that normalize its use. Christian charity and the Hippocratic Oath require that we have that conversation too.

And, finally: 3.) Which cross is he recommending Christians embrace as the way to life? The benefits Gross identifies are mostly about his own emotional state . He feels better and therefore assumes he is better, testifying, “That little can of mints ended up changing my life.” But anyone familiar with substance abuse knows that abusers can feel better by dulling the pain. Is his instrument of change really setting him free, or will it end up enslaving him instead? We are warned in Scripture that experience can be misleading, but experiences are the only reasons he’s giving for why we should take up this novel green cross and follow him.

To all appearances, he means well, but for Christians, the conversation should always center on Jesus and the actual cross by which we’re saved. Any larger conversation should be grounded in the original Easter gospel. There will be pain involved, but it promises a better salvation than any little MED-a-mint green cross ever will.