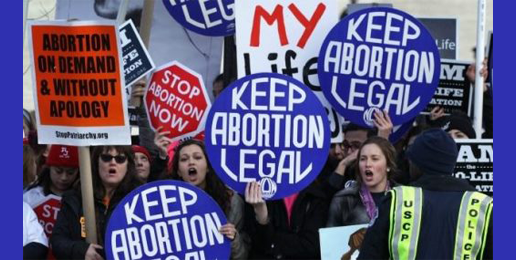 *Caution: Content May Not Be Suitable for Younger Readers*

A blaring, front-page headline in the Chicago Tribune about the women’s march for death and deviant sexuality marred the Sunday morning of many Illinoisans—once again justifying the subterranean position the mainstream press occupies in the view of many Americans.

I wonder how the Trib reported the 2013 March for Life in Washington that drew an estimated 650,000. And does anyone believe the coverage would have been less feverish and sycophantic if the numbers for the death and deviance march had been 400,000 or 200,000?

The statements made by protesters yesterday affirming a non-existent moral right of women to have their offspring killed is more abhorrent than any of the abhorrent things Trump has said.

Extolling the legal right to have incipient human life exterminated in the womb is incalculably abhorrent. What we can calculate, however, is how many human lives have been killed in wombs in the U.S. since 1973: 59, 738, 680.

The Trib cited the “show of star power absent from inauguration festivities,” so let’s take a glimpse at what inaugural attendees missed.

Welcome to the revolution of love, to the rebellion, to our refusal as women to accept this new age of tyranny where not just women are endangered but all marginalized people….It took us this darkness to wake us the f*** up….And to our detractors that insist that this March will never add up to anything, f*** you. F*** you….Yes, I’m angry. Yes, I am outraged. Yes, I have thought an awful lot of blowing up the White House, but I know that this won’t change anything….I choose love.

Let’s not forget these patriotic words from women’s role model Madonna at a public event just a month before the election:

If you vote for Hillary Clinton, I will give you a b***job. OK? I’m really good. I’m not a douche, and I’m not a tool. I take my time, I have a lot of eye contact, and I do swallow.

We need to take inspiration from nature, and remember that we hold the mystery of life, and the seed of every possibility within our bodies….We need to demand freedom from fear over our bodies and control over our own bodies…. [F]rom the bottom of both hearts beating inside my miraculous female body, I want to thank our new president. You just started the revolution.

Cognizant of the beating heart of another human within her womb—the mystery of life, the miraculous body of another whose seed too contains within it possibility—Portman seeks to protect women’s legal right to kill it.

Then the always melodramatic Ashley Judd recited the words of 19-year-old Nina Donovan. Here’s just a taste of her distasteful spoken words:

I am a nasty woman. I’m as nasty as a man who looks like he bathes in Cheetos dust. A man whose words are a distract to America. Electoral college-sanctioned, hate-speech contaminating this national anthem….Blacks are still in shackles and graves, just for being black. Slavery has been reinterpreted as the prison system in front of people who see melanin as animal skin….I didn’t know devils could be resurrected but I feel Hitler in these streets. A mustache traded for a toupee. Nazis renamed the Cabinet Electoral Conversion Therapy, the new gas chambers shaming the gay out of America….I am not as nasty as homophobia, sexual assault, transphobia, white supremacy, misogyny, ignorance, white privilege….Yeah, I’m a nasty woman—a loud, vulgar, proud woman.

Someone needs to tell Ashley Judd that Bill Clinton did a whole lot worse than grabbing “p***ies,” and Hillary defended him while victimizing his victims.

I’m a grieving woman. I’m grieving that “nasty women” speak in words that distract, delude, and degrade America and destroy American lives. Mainstream press-sanctioned, deplorable-speech and lies contaminating our national anthem….Blacks still in shackles and graves because their fathers abandoned them. Slavery has been reinterpreted as the welfare system by people who see melanin as victimskin….I didn’t know devils could be resurrected but I feel Hitler in our baby abattoirs. The final solution traded for “choice.” Mengele renamed “sex re-assigners,” castrating men out of manhood. I grieve for the victims of gender-obliterators, homofascists, and race-baiters whose lies deny that true identity is found in Christ alone—not in sexual deception or melanin.

Cub Scouts Reject Girl Who Wishes She Were a Boy