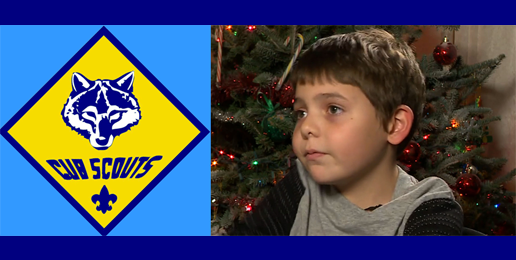 “Progressives” and even some so-called “moderate” Republicans are trying to diminish the import of allowing biological males and females to access restrooms, locker rooms, and even private clubs reserved for the opposite sex. Those who promote practices and policies that mandate sexual integration of heretofore single-sex facilities hope to blind the fearful masses to the larger issues and devastating cultural implications of the ultimate goal of sexual subversives: the eradication of all public recognition and accommodation of sexual differentiation.

A recent USA Today article provides yet more evidence that we are hurtling pell-mell toward the culmination of the cultural revolt against nature, commonsense, and decency that the blind Left covets. The article reports on an 8-year-old girl who masquerades as boy and has been told she cannot remain in the Cub Scouts because, well, she’s objectively a girl:

From the moment he joined, 8-year-old Joe Maldonado eagerly looked forward to camping trips and science projects as a member of the Cub Scouts. But his expectations were dashed after his mother said she received a phone call from a scouting official who told her that Joe would no longer be allowed to participate because he was born a girl.

Kristie Maldonado said she was stunned because her son had been a member of Cub Scout Pack 87 in Secaucus for about a month, and his transgender status had not been a secret. But some parents complained…even though her son had been living as a boy for more than a year and was accepted as a boy at school.

Some people have questioned his gender identity before, [“Joes”] said, adding that it “got so annoying” having to tell people over and over that he is a boy. He said he was “disappointed” that he can no longer be a Cub Scout but would not want to go back without receiving an apology.

“How dare they judge me?” he said, adding of his gender identity: “I don’t have to explain it. It’s the way I’m born.”

First, a “transgender boy” is in reality a girl. “Joe” is not a “he.” Using incorrect pronouns is not a compassionate way to address this girl’s mistaken notion that she is boy trapped in a girl’s body or that she can become a boy through rhetoric, dress, and elaborate chemical and surgical interventions.

Second, birth certificates identify an objective condition—that is, sex—that stubbornly persists whether or not humans undergo chemical and surgical alterations. Birth certificates do not assign or determine “gender” as currently redefined. And birth certificates should be prohibited by law from being altered. The government has no business engaging in fraud.

Third, identifying someone’s sex does not constitute illicit judging. And holding the view that it is immoral and unhealthy to reject one’s sex does not constitute illicit judging (clearly “Joe” has been well-tutored in Leftist language and ideology). The Boys Scouts is a private club for boys. Therefore, requiring that those seeking membership in the Boy Scouts be, in reality, objectively male no more constitutes illicit judging than does requiring those seeking membership in the Mensa Society be, in reality, geniuses. Whether or not they “identify” as geniuses is irrelevant.

The USA Today article shared this troubling information from Justin Wilson, the executive director of Scouts for Equality, a homosexual advocacy organization:

[Wilson] knows of at least two transgender boys who are Cub Scouts about the same age as Joe, one in a southern state that he did not name and the other in New York. He said he did not want to be more specific because of concerns that the national organization might take steps against them. The use of birth certificates to determine gender identity, he said, would be “a new, unfair arbitrary standard” for membership.

Wilson is right that asking for birth certificates would be a new practice for membership in the Boy Scouts. Historically, there has never been a need to ask parents to provide birth certificates because parents weren’t disguising their children in order to help them pass as the opposite sex.

On everything else, Wilson was wrong:

And this conundrum leads us to the place where sexual anarchists want society to go—the place where we, because of our shameful cowardice, are allowing ourselves to be led: the land of mandatory co-ed everything and language rules to efface sexual differentiation.

The Left claims that separations based on sex are equivalent to separations based on race, arguing that there is as little difference between biological males and females as there is between blacks and whites. Outgoing Attorney General Loretta Lynch described the practice of requiring separate facilities for blacks and whites as based on a “distinction without a difference,” implying that the difference between males and females is similarly insubstantial. This statement reveals a profound ignorance.

Blacks and whites are distinct by virtue of their skin color, which is, indeed, a distinction without a difference. But men and women are substantively and significantly different. Even homosexuals implicitly admit this truism when they claim they are romantically and erotically attracted only to persons of their same sex. Males and females are so different in fact that a gender-dysphoric girl is insisting that she join the Boy Scouts instead of the Girl Scouts. If the difference between boys and girls constitutes a “distinction without a difference”—like the difference between blacks and whites—then why must a gender-dysphoric girl join a club for boys only? Why isn’t her refusal to join the Girl Scouts tantamount to a white person refusing to share a restrooms with blacks?

If we accept the fanciful Leftist idea that there is no more difference between girls and boys than there is between blacks and whites, then how can we maintain any single-sex restrooms, locker rooms, and private clubs? Logically must we not allow all men, boys, girls, and women to use the same showers and join the same clubs? After all, blacks and whites do.

And this is where accepting science-denying Leftist assumptions about biological sex, “gender,” “gender identity,” and gender dysphoria buttressed by pseudo-science research will lead.

Before everyone succumbs to the 21st Century certitude of professional mental health alchemists, wizards, and shamans, let’s not forget how often once influential ideas in the field of psychology have been debunked (e.g., Freudian theories, “recovered memory syndrome”).

A study appearing in Science Magazine in August, 2015 reveals how woefully unreliable psychological research is. The authors of the study titled “Estimating the reproducibility of psychological science” explained that “We conducted replications of 100 experimental and correlational studies published in three psychology journals using high-powered designs and original materials when available,” and found that only “39% of effects were subjectively rated to have replicated the original result.”

Liberal Slate Magazine recently exposed just one study  in which researchers tried to replicate an influential earlier study on what is called “ego depletion”—a study on human willpower that has been cited over 3,000 times:

A paper now in press, and due to publish next month in the journal Perspectives on Psychological Science, describes a massive effort to reproduce the main effect that underlies this work [on ego depletion]. Comprising more than 2,000 subjects tested at two-dozen different labs on several continents, the study found exactly nothing. A zero-effect for ego depletion: No sign that the human will works as it’s been described, or that these hundreds of studies amount to very much at all.

Michael Inzlicht, researcher at the University of Toronto and co-author of the study that attempted to replicate the ego-depletion study, writes on his blog about the dire implications for social psychology (and I would add for culture) that result from bad research:

Our problems are not small and they will not be remedied by small fixes. Our problems are systemic and they are at the core of how we conduct our science….I’m in a dark place. I feel like the ground is moving from underneath me and I no longer know what is real and what is not….During my dark moments, I feel like social psychology needs a redo, a fresh start….Our problems are real and they run deep….What is not helping is the lack of acknowledgement about the severity of our problems. What is not helping is a reluctance to dig into our past and ask what needs revisiting.

Time is nigh to reckon with our past. Our future just might depend on it.

One final note about the relationship of science, social science, or pseudo-science as it pertains to volitional human behavior: Though science may be able to provide some information about the cause of feelings or desires, it can tell us nothing about the morality of actions that may be motivated by such feelings or desires. For example, science may be able to demonstrate that biological factors contribute to aggressive feelings, but such information tells us nothing about the morality of aggressive acts.

Similarly, science may one day demonstrate that biochemical factors contribute to the desire to be the opposite sex or the delusion that one is the opposite sex, but such research would tell us precisely nothing about the morality of cross-dressing, administering puberty-blockers and cross-sex hormones, or surgically mutilating healthy body parts. We already know that the fall has affected not only our hearts, minds, and wills but also our bodies, which explains the presence of, for example, brain and endocrine disorders. It is no more moral for those with Gender Identity Disorder to have healthy breasts or testes amputated in the service of a futile quest to become the opposite sex than it is for “amputee-wannabes” (i.e., those with Body Integrity Identity Disorder) to have healthy arms or legs amputated. The causes of their disordered desires do not render their bodily mutilations moral.

Practices and policies that permit biological females to use facilities or participate in activities limited to biological males teach all children the lie that physical embodiment as male or female is of less significance than feelings about one’s sex. It also teaches all children that in order to be compassionate, inclusive, and just, they must relinquish their privacy.

If biological sex is, in reality, more important than one’s feelings about one’s sex and is essential to what it means to be human, facilitating sex-rejection is deeply destructive.

Listen to this article HERE.

Boy Scouts Allow Girls to Join. Are Transgender ‘Zir Scouts’ Next?
b
a
x
r